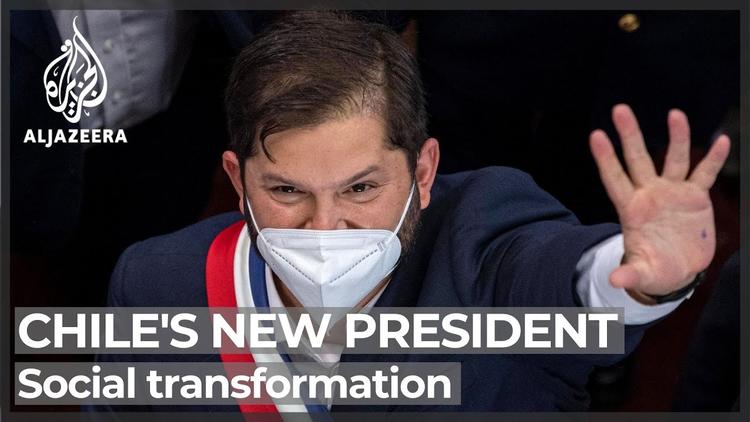 ( Middle East Monitor ) – Last Friday, thirty-six-year-old Gabriel Boric, the youngest Chilean president ever to have been elected, officially became the president of Chile after winning Chile’s presidential elections last December. His victory represents a major revival for Chile’s progressive left and a new era for Chile and neighbouring countries. Boric began his inaugural speech by mentioning late president, Salvador Allende: “And as Salvador Allende predicted almost fifty years ago, we are opening the grand avenues where free men – free men and free women – will go forward to build a better society.” It was if he wanted to announce to Chile and the whole world that his presidential era would be an era of hope and change.

The Palestinian cause featured on the president’s agenda as soon as he took over the presidency. “We are monitoring what is happening in Ukraine, such as the attack on a children’s hospital in Mariupol or the attack that targeted a military base 20 kilometres from Poland. We sympathise with the Ukrainian people because of the war. However, there are a lot of other regions that witness other scourges – Palestine, for example. Nonetheless, we see little solidarity,” explained Boric during his first interview on Chile’s Canal 13, on the popular programme Las Caras de la Moneda. Boric called on the international community to show solidarity with Palestine as it has shown with Ukraine: “Palestine has been occupied for a long time, and we do not know much about what is happening there.”

Boric’s statement is neither new nor unexpected, as Boric has always been a staunch supporter of the Palestinian cause and a defender of human rights in the occupied territories. Boric branded Israel a “genocidal” and “murderous” state more than once. In addition, Boric has always supported the boycott of products from illegal Israeli settlements. In July 2020, Boric, alongside the Chilean Senate, approved a resolution calling on the government to enact legislation that would ban all Israeli settlement products, prohibit companies involved in the Israeli occupation from benefiting from any agreement or bid signed by Chile and apply tourism guidelines for Israel and Palestine that would not allow the promotion of trips to Israel using pictures of East Jerusalem or Bethlehem “among other Palestinian cities”. Boric was one of the supporters who voted for this resolution.

Speaking to MEMO, Director of the Palestinian community in Chile Maher Pichara backed Boric’s statements on Canal 13: “It is the reality. Many reports have been issued by international organisations confirming the existence of crimes against humanity committed by Israel, such as apartheid and the persecution of Palestinians. Unfortunately, we have never seen any reaction from the international community,” he affirms. “For example, last year was the deadliest for Palestinians since Israeli security forces killed at least 313 Palestinians, including 71 children, according to a report of Israeli human rights organisation B’ Tselem. In contrast, there was no major reaction from the international community.”

According to Dr Kamal Cumsille, professor of Arab Studies at Chile University: “The media doesn’t shine a light on Palestine unless the situation worsens. This week, for example, Zionist settlers attacked a school in Bethlehem. Did we see this on the news or TV? While at the same time, they showed daily that Russia had bombed schools in Ukraine. Today we see how media apologies to the Ukrainian resistance; however, they called the Palestinian resistance terrorists.” Dr Cumsille confirmed to MEMO that Boric´s victory would have more than a positive impact on the Palestinian community in Chile as well as the Palestinian cause.

The Palestinian community in Chile rushed to congratulate the elected president after his victory in December, as well as when he took office, via a formal statement on their official social media pages: “We wish the best of luck and success to our new president who took office today. Together with ministers and parliamentarians, we will govern the destinies of our country for the next four years. We commit ourselves to continue working for Chileans and Palestinians.”

Chile is now under Boric’s leadership for the next four years. Chile, Palestine and other countries are hoping he can bring and inspire change. Everyone is betting on him because his new government may shape the future of neighbouring countries, and even abroad. This is the change we hope to see soon.