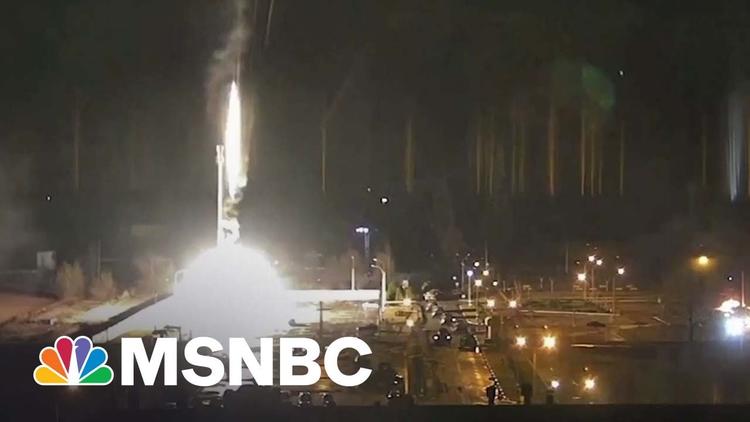 Ann Arbor (Informed Comment) – The Russian tank shelling of the massive Zaporizhzhia nuclear plant in the city of Energodar, which set fire to the top three stories of a training building behind the complex, raised alarms about the possibility of a nuclear meltdown.

At 6:20 AM on Friday Ukraine time, the blaze was extinguished by Ukrainian firefighters. Initially they had been prevented from trying to put it out by Russian troops, but at some point were allowed to do their jobs.

The International Energy Agency of the UN said that there was no evidence of leaking radioactive materials at the plant, which has been shut down as a safety precaution. Zaporizhzhia is the largest nuclear plant, with six reactors, in Europe.

Ukraine’s President Volodomyr Zelensky alleged that the Russian tanks had night vision capabilities and knew exactly what they were shelling, so that this was a premeditated tactic. He said, “No country besides Russia has ever fired upon an atomic power plant’s reactors. The first time, the first time in history.”

The laws of warfare forbid reckless endangerment of the non-combatant, civilian population, so if the shelling of the nuclear plant was deliberate, it is a war crime. Also, it is obviously deliberate.

Pro-nuclear observers were quick to criticize initial fears of a meltdown as alarmism, insisting that Zaporizhzhia was designed differently and more safely than the Chernobyl plant that went into a meltdown in 1986, creating the globe’s first level seven reactor event.

While all that may be true, it is nevertheless the case that if the Russians keep shelling a nuclear plant with heavy armor and artillery, bad things will happen. Even just the release of nuclear material into the air would be a form of “dirty bomb,” with severe health consequences for the population. After Chernobyl, radioiodine isotopes in rainwater and on grass (making its way into children’s milk) have posed a health hazard for children in towns near the blighted reactor ever since.

Although Germany has been criticized for closing its aging nuclear plants, making itself more dependent on Russian methane gas, Berlin clearly did the right thing. Nuclear plants are dangerous and produce dangerous waste that cannot be stored safely. They aren’t as low-carbon as people think.

Moreover, nuclear plants do not play well with renewables, which are the new determiner of the shape of energy markets. Since winds come up and die down, and the sun sets, renewables are “intermittent.” They can supply a lot of power. Scotland, an industrialized country, gets all of its electricity from low-carbon sources now, and Germany gets 40% – 45% of its electricity from wind, solar and other renewables. But renewables need other forms of energy to take up the slack when they die down, and which can do so quickly. Hydroelectric power is a good complement, as are mega-batteries. Natural gas can scale up and down.

But neither coal nor nuclear plants can power up and power down quickly, and so don’t really help with a grid that is increasingly based on renewables. Even Conservative-ruled England gets a quarter of its electricity from wind.

Germany’s error was in not following the Scottish path. In the G7 club of wealthy democracies, Germany has done more for green energy than anyone else, but that isn’t saying much. And Germany could and should have done more. If it had, there would be no crisis of methane gas prices and no dependence on Vladimir Putin to keep the lights on. Russia is a major gas exporter.

The Ukraine War and the cancellation of the Nordstream 2 methane gas pipeline from Russia to Germany seems set to galvanize Germany’s energy switch to renewables. Green Party officials, part of the ruling coalition, are calling wind and solar “Freedom Energy” because they help Germany escape Putin’s vise.

And the really great thing about wind turbines and solar panels is that if a tank shell hits one, there is no release of radioactivity. At all. Ever.