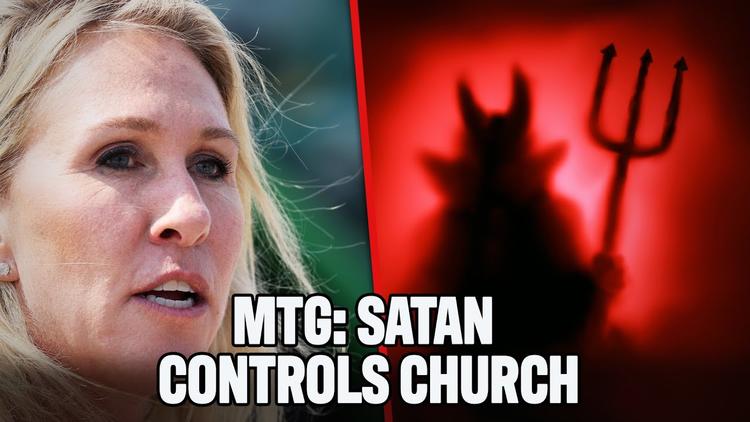 In many ways the success of the contemporary Republican Party depends on an Evangelical-Catholic political alliance against abortion rights and the sexual revolution. Evangelicals in Congress have been willing to vote six Catholics onto the Supreme Court for this reason. Greene’s vitriolic diatribe, however, raises the possibility that the QAnon white nationalists who are taking over the Republican Party are breaking with the Church over some of its social policies, which are often liberal or at least humanitarian.

She later said that foreign aid should be cut to countries from which refugees are fleeing to the US and that “If the bishops were reading the Bible and truly preaching the word of God to their flock and not covering up child sex abuse and pedophilia, loving one another would have the true meaning and not the perversion and the twisted lie that they’re making it to be.”

She had said that the Christian principle of “loving one another” should not involve surrendering to a “globalist agenda” to make “America become something that we are not supposed to be.”

I have thought about her diction here and I can’t make it mean anything other than “we Christian white people are supposed to love one another but that doesn’t mean we have to love brown or Black people, and certainly doesn’t mean we have to minister to non-white refugees. And if the Roman Catholic Church interprets Christianity as requiring charity to all, then it has itself become a tool of Satan.”

In other words, she views Christianity only through the lens of white nationalism.

But the (literal) demonization of Catholicism stands out in her remarks because it resonates with a long-term strand of Protestant white nationalism, as with the mid-19th century “Know-Nothing Movement,” a conspiratorial hate group that burned Catholic churches and attacked Catholic Americans.

Although Greene was brought up Catholic, she says she fell away from the church.

Being an army brat, I traveled around the world growing up, but in between postings we would spend time in Northern Virginia. I can’t remember now how it happened, but somebody once dragged me to a Baptist revival meeting when I was a kid and I was given a pamphlet about how the Pope was the antichrist and had 666 sewn into his mitre. Our branch of the Coles are fallen-away Catholics, but I remember being appalled. My generation had a positive impression of Pope John XXIII and the reforms of Vatican II. In fact, the latter helped inspire my BA thesis, the field work for which I conducted in Beirut, about the inter-religious dialogue it kicked off with Muslims.

The vicious anti-Roman Catholic sentiments expressed by Greene, as I said, evoke an ugly side of American history.

Three decades ago, historian Bryan Le Beau wrote in his address “Saving the West from the Pope”: Anti-Catholic Propaganda and the Settlement of the Mississippi River Valley,”

“Arthur M. Schlesinger, the elder, once told John Tracy Ellis, dean of the historians of American Catholicism, that he regarded prejudice against Roman Catholics to be “the deepest bias in the history of the American people.” By this, he did not intend to suggest that it was the most violent, though at times it certainly was; or that it was the most consistent, as it tended to wax and wane throughout American history; but rather, that the roots of anti-Catholicism lay buried in the depths of the American consciousness, bearing fruit over time across the American cultural landscape.”

On the East Coast from the 1820s forward, as German and Irish Catholics came to the country, the slogan of “no popery” was raised and riots were staged against the latter. In 1844 St. Michael’s Catholic Church in Philadelphia was burned and 20 people were killed. Between 1800 and 1840 a million Roman Catholics immigrated. (My paternal ancestor Georg Kohl [Anglicized as Cole] arrived in 1830, so he and his family would have known that atmosphere.) A Protestant riot greeted papal nuncio Archbishop Gaetano Bedini when he came to Cincinnati in 1853, Le Beau reminds us.

Catholic associations that had begun in Austria and France were attacked as threats to Republican liberties, since, it was alleged, the Church supported royal absolutism and opposed the idea of a Republic with the sort of individual rights adumbrated in the US constitution. Although it is true that the 19th-century Church profoundly disliked the French Revolution and its ideals, and much preferred monarchies that would back Catholicism, it isn’t the case that American Catholics were seditious. Some did object to Protestant hegemony, especially in public schools, and one man burned some King James Version Bibles, which made a bad impression.

It is ironic that in the 19th century Catholic Americans were attacked for being too conservative, and now Greene is attacking them for being too liberal. I pointed out some time ago that some right-wing Catholics make a big deal of their faith but completely ignore or even oppose the contemporary church’s social teachings.

The 19th century hate groups, however, did associate Catholics with immigration and saw a danger that they would convert the other immigrants, so that Nativist concern is common to our moment and the 1840s.

If Greene’s anti-Catholic sentiment becomes widespread in today’s GOP, it could be fatal to the party, since of the 72 million Catholic Americans, about half now vote Republican.