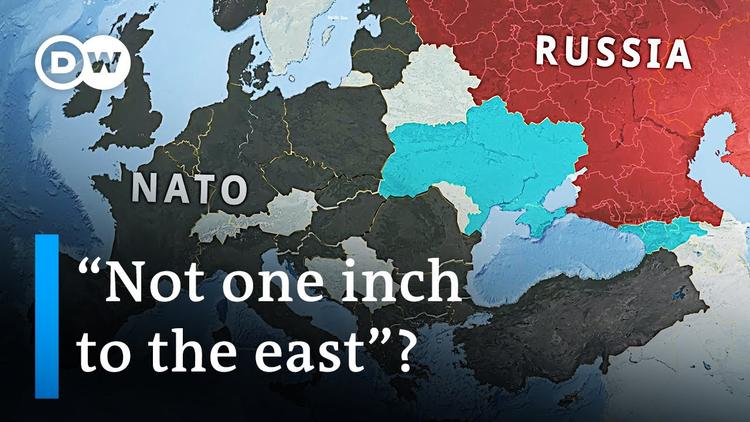 Vancouver (Special to Informed Comment) – To be absolutely clear, the attack on Ukraine was a clear violation of international law, and there is absolutely no excuse for this invasion. Putin is a war criminal for initiating this unjustifiable bloodshed.

However, NATO in general and the United States in particular followed an unnecessary and dangerous policy of political and military expansion that quite predictably aggravated tensions in Eastern Europe.

As part of his effort to dismantle the Soviet empire in 1990, Mikhail Gorbachev was naturally concerned to ensure the safety of Russia. To put this worry into context, Russia had been invaded by Napoleon in the 19th century, attacked by Germany (and Austria-Hungary) in the First World War, and attacked by Nazi Germany in the Second World War.

The Nazis killed about 27 million people in the Soviet Union.

Given that bloody history and the fact that West Germany was part of NATO in 1990, it is not surprising that Russians were concerned about their security. Assurances were given by Western leaders. For example, on January 31, 1990, West German Foreign Minister Hans-Dietrich Genscher promised that NATO would rule out an expansion of its territory towards the Soviet borders.

Just over a week later, on February 9, during talks about the reunification of Germany, U.S. Secretary of State James Baker told Gorbachev that NATO would not expand, “one inch eastward”. 1

One day later, on February 10 at a meeting in Moscow, West German Chancellor Helmut Kohl and Gorbachev agreed in principle to German unification and membership in NATO, as long as NATO did not expand to the east – and they formally signed the deal in September 1990.

Despite these promises, NATO did expand towards Russia, and in 1997, dozens of foreign policy veterans (including former U.S. Defense Secretary Robert McNamara and former CIA Director Stansfield Turner) sent a letter to then-President Bill Clinton calling, “the current US-led effort to expand NATO…a policy error of historic proportions.” They predicted, accurately, that:

In Russia, NATO expansion, which continues to be opposed across the entire political spectrum, will strengthen the nondemocratic opposition, undercut those who favor reform and cooperation with the West [and] bring the Russians to question the entire post-Cold War settlement.” 2

“Even George Kennan, rightly considered to be THE architect of the US Cold War strategy of containment, also worried about NATO expansion:

I think it is the beginning of a new cold war. I think the Russians will gradually react quite adversely and it will affect their policies. I think it is a tragic mistake. There was no reason for this whatsoever. No one was threatening anybody else.”

Of course there is going to be a bad reaction from Russia, and then [the NATO expanders] will say that we always told you that is how the Russians are—but this is just wrong.” 3

Despite the promises (and the threat of empowering the hawks in Russia), Poland, Hungary and the Czech Republic joined NATO in 1999, with Bulgaria, Estonia, Latvia, Lithuania, Romania, Slovakia and Slovenia following in 2004.

US planners were warned again in 2008 by US Ambassador to Moscow William Burns (now director of the CIA) that:

…NATO aspirations not only touch a raw nerve in Russia, they engender serious concerns about the consequences for stability in the region. Not only does Russia perceive encirclement, and efforts to undermine Russia’s influence in the region, but it also fears unpredictable and uncontrolled consequences which would seriously affect Russian security interests. 4

The possibility of stationing nuclear weapons in Poland and Ukraine would naturally concern Russia, which worried that they might give NATO the capacity to launch a nuclear first-strike. (In 1961, the U.S. instituted a naval blockade around Cuba and threatened to invade the island when the Soviet Union placed nuclear missiles there).

It is not unreasonable that Putin called on the West to halt NATO expansion, negotiate Ukrainian neutrality, and remove missiles, troops and bases near Russia.

Had the US been genuinely interested in avoiding war, it would have taken every opportunity to de-escalate the situation. Instead, it did the opposite nearly every step of the way.

Again, although there was no excuse for Putin to invade Ukraine, “calling it ‘unprovoked’ distracts attention from the US contribution to this crisis. The US ignored warnings from both Russian and US officials that a major conflagration could erupt if the US continued its path…” 5

Given the suffering of the people of Ukraine (as well as the Russian “cannon fodder” who are also victim’s of Putin’s war, and the brave people inside Russia who are standing up to Putin), and the danger of nuclear omnicide, it is more important than ever for Western audiences to direct our governments to make peace a true priority.

Remember, the United States is not a force for peace and justice in the world. A partial list of their crimes is horrific: Iran, Guatemala, Indonesia, Chile, Nicaragua, Panama, Iraq (remember the WMD – not), Afghanistan, and Vietnam (over 3 million people killed).

And now Yemen. As Edward Hunt wrote in The Progressive:

“An estimated 377,000 people have died in the war. Nearly 60 percent of these deaths are due to the humanitarian crisis, which is making it nearly impossible for the Yemeni people to access food, water, and health care. Most of these indirect deaths have been young children, who have been devastated by malnutrition . . . A study commissioned by the United Nations Development Programme estimates that, in 2021, a Yemeni child under the age of five died every nine minutes due to factors related to the war.” 6

Are Western countries outraged? Hardly. Britain, Canada, and other NATO countries are still selling military equipment to Saudi Arabia as it continues to slaughter Yemenis. The United States supplies spare parts for Saudi/UAE coalition war planes, along with maintenance and a steady flow of armaments. Noam Chomsky explains that,

“The Saudi and Emirati air forces cannot function without U.S. planes, training, intelligence, spare parts. Britain is taking part in the crime, along with other Western powers, but the U.S. is well in the lead.” 7

In Afghanistan, millions of people are facing starvation, a crisis made much worse because Washington is refusing to release billions of dollars of Afghanistan’s central bank reserves. One result is that,

“…more Afghans are forced to resort to the unimaginable to survive: since August, the number of Afghans resorting to negative coping capacities has risen sixfold, such as selling young daughters into marriage, pulling children out of school to work, selling organs…”

UNICEF recently warned that more than a million Afghan children will need treatment for severe acute malnutrition this year and 13 million kids in total will need humanitarian assistance. 8

And let’s not forget about the Palestinians, living in what Desmond Tutu and Amnesty International called an “apartheid” state. Stephen Zunes accurately notes that, “If Biden really believed that countries have a right self-determination he would…support Palestinian self-determination…” 9

As the most powerful nation on Earth, the United States has more influence on global affairs than any other state actor. And while there are numerous and complex explanations for its actions, multinational corporations, especially those who profit from war and the threat of war, have the most influence on U.S. policy.

The problem is hardly new. In 1961, U.S. President (and five-star general) Dwight Eisenhower warned against, “the unwarranted influence”, of the “Military-Industrial Complex”, which will do anything to increase profits, which grow as arms sales increase and which benefit from wars.

So, while moral outrage over Russian crimes in Ukraine is completely justified, we in the West need to avoid simplistic good guy/bad guy dichotomies.

A global peace movement, like the one that prevented the United States from using nuclear weapons against the Vietnamese, is our best hope to reduce the risk of wars and other existential crises. As Nicolas Haeringer observes (in Informed Comment), “We can turn concrete acts of solidarity into the new norm…” 10 and reduce the unacceptable amount of suffering from conflicts, hunger, and poverty, as well as addressing the climate crisis.

10. Nicolas Haeringer. “We must turn solidarity with Ukraine into the new normal for all refugees”. Informed Comment. 29 March 2022. [https://www.juancole.com/2022/03/solidarity-ukraine-refugees.html]