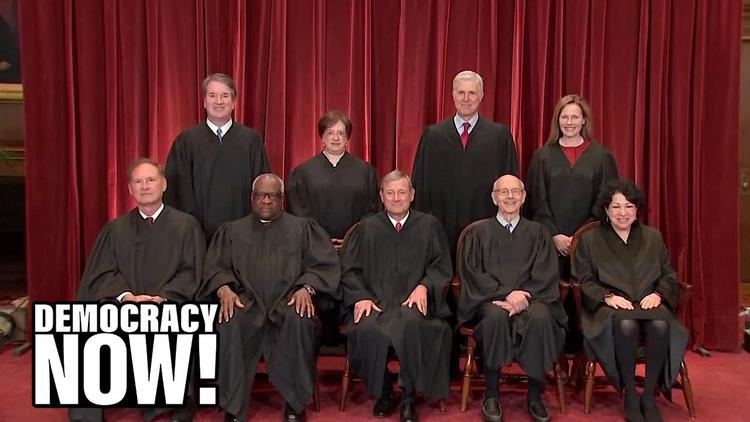 Ann Arbor (Informed Comment) – The American Religious Right as a political force is in some ways a creation of the 1973 Roe v. Wade Supreme Court decision that made abortion a woman’s right grounded in Americans’ constitutional right to privacy. Opposition to abortion and to a right to privacy united previously divided factions within US Christianity, Evangelicals and Roman Catholics, and galvanized the previously quietist Evangelicals to go into politics.

Both streams of Christianity decidedly opposed any supposed right of the individual to privacy if that meant a right to use contraception, to sleep with someone to whom the person was not married, or to engage in anything but straight sex. The inability any longer to keep women barefoot and pregnant, moreover, had challenged the ingrained patriarchy of these churches, empowering women, a process which the men wanted to reverse. Some southern Evangelicals still regretted the striking down in 1966 of “miscegenation” laws allowing interracial marriage, a sentiment that has seen a recrudescence in the white nationalist branch of the Republican Party. It, too, is rooted in a denial of any right of privacy.

An alliance of Catholics and Evangelicals has proved powerful, especially once they captured the Republican Party, which had previously mainly comprised mainstream Protestants. The Republican Party had long represented big business, but suffered from a structural problem of finding majorities of ordinary Americans who would vote for plutocracy, The marriage of Big Capital with Big Fundamentalism allowed Republicans to develop popular constituencies who would put them in office and keep them there, with tax cuts for the wealthy and overturning Roe v.Wade as the primary planks of their platform.

Samuel Alito, who wrote the manifesto against privacy rights, is a conservative Roman Catholic whose opinions often challenged the separation of religion and state. He was appointed by George W. Bush precisely for the purpose of overturning Roe v. Wade so as to get out the Evangelical and Catholic Latino vote for Bush, the basis on which he won two terms as president. Bush’s consigliere, Karl Rove, actively colluded with 80 organizations of the religious Right in putting Alito forward.

They have gotten what they wanted, a painfully unequal America dominated by a handful of billionaires and a return to the early nineteenth century when states had Established churches even though the Federal government was prohibited from favoring any one religious group. For thirty years after the Constitution was enacted, some states collected religious taxes for churches. It was not until the 1830s that Establishment of religions faded at the state level. After the Civil War, the 14th amendment settled the issue (at least so far), requiring that state law conform to the federal constitution. But the outlawing of abortion at the behest of Evangelicals and Catholics is a stealth return of Established religion at the state level, at which Justice Samuel Alito is conniving,

The American Religious Right is only one example of a global phenomenon. The Muslim world has its equivalent of the Evangelical Christians, determined to impose their moral and legal ideas on the rest of the population through gaining leverage over the state, such as the Muslim Brotherhood.

As I have noted before, the American conviction that all Muslims are fundamentalists has led to a misunderstanding of Muslim societies. The 18 Muslim-majority societies with Draconian anti-abortion laws are all countries where the Muslim Religious Right is powerful. In contrast, more secular or “civil” Muslim countries often have laws that are more liberal. In countries where women have a relatively high status, such as Turkey and Tunisia, predictably abortion is offered on demand. I earlier observed:

Gilla K. Shapiro, writing in Health Policy and Planning, found that ten Muslim-majority countries out of 47 surveyed permit abortion on demand. These are Albania, Azerbaijan, Bahrain, Kazakhstan, Kyrgyzstan, Tunisia, Tajikistan, Turkey, Turkmenistan, and Uzbekistan. Another two, Burkina Faso and Guinea, allow abortion in cases of incest and rape, which the new Texas law does not, and Sudan allows it in case of rape.

Since 43 U.S. states have some restrictions on abortion, in fact, there are more Muslim-majority countries with abortion on demand than there are U.S. states . . .

In medieval Islam, the Hanafi school, which predominates in Turkey and much of Asia, permitted abortion up until 3 months. Some Shafi’is, the school favored in Lower Egypt, also allowed it that late date. Let me underline this. A significant proportion of medieval Muslim jurists favored rules for abortion that were more permissive than today’s law in Texas . . .

Shapiro did a comparative survey of abortion laws in 47 Muslim-majority countries. She identifies 7 levels of abortion rights. The least permissive are laws that only make an exception for a danger to the life of the mother. The new Texas law resembles those in 18 Muslim-majority countries, including Afghanistan, Bangladesh, Iraq, Egypt and Lebanon, which only allow this exception.

That is, only 18 of 47 Muslim-majority countries have abortion laws today as restrictive as that in Texas . . [which is the model for a raft of laws to be enacted as soon as Roe is struck down].

This issue is not along a Christian-Muslim or East-West axis.