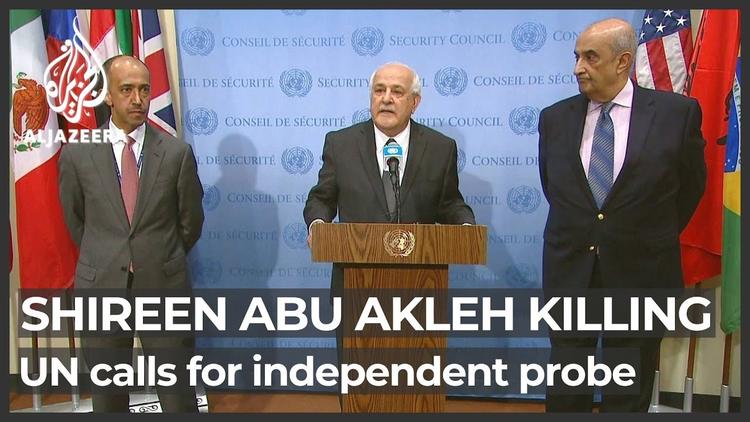 ( Middle East Monitor ) – Shireen Abu Akleh’s death may well turn out to be a landmark event in Israel’s global reputation and, perhaps, even its domestic politics. The killing of the high-profile Palestinian-American journalist, who worked for Al Jazeera covering Israel and the occupied West Bank, has been widely condemned regionally and internationally.

The implications of her death in Jenin last Wednesday are potentially far-reaching: specifically, the Palestinian Authority (PA) demands that the circumstances be investigated by the International Criminal Court (ICC) in The Hague, which is already examining possible Israeli war crimes.

A brave, Christian Jerusalemite was killed

Abu Akleh was struck in the head by a bullet during an exchange of fire between Israeli forces and Palestinian gunmen. Israeli forces were operating in the Jenin refugee camp and other areas of the West Bank to apprehend “terror suspects”, the military said. According to the army, during the raid militants opened fire at the Israeli forces and hurled explosives at them, before the soldiers returned fire.

A Christian Jerusalemite, aged 51, Abu Akleh was well-equipped to report on one of the most toxic and divisive conflicts in the world. Having joined Al Jazeera in 1997 (a year after it was founded) as one of the network’s first field correspondents, she acquired a reputation for bravery, professionalism and a strict adherence to facts. Her voice, colleagues said, was “strong and calming”.

Al Jazeera, based in Doha, has long prioritised covering the Israeli occupation, now in its 55th year. Al Jazeera, unlike many other Arabic TV channels, has an English-language channel, too, enhancing its global influence.

Shireen’s death was condemned by the United States, the European Union, the United Nations, Turkey and Qatar. All have demanded an independent investigation, but Israel clearly prefers a joint investigation conducted by itself and the PA.

Israel approached the PA requesting to obtain the bullet removed from Abu Akleh’s body in order to conduct forensic tests and determine the source of fire that killed her. The office of Israel’s Coordinator of Government Activities in the Territories, Israel’s official governing body in the West Bank, offered to have representatives of both the PA and the US present in the course of the examination.

But the day after she was killed, the PA held a memorial service for her at its Ramallah headquarters, where President Mahmoud Abbas called publicly for the ICC to investigate. “Shireen was a voice of truth, a national voice, conveying the suffering of the mothers of martyrs and prisoners, of Jerusalem and of refugee camps,” he said, adding: “How can the truth be hidden? We reject cooperation with the Israeli investigation. We do not trust them.”

Abu Akleh’s US citizenship was clearly a factor in the condemnation by Washington. “It’s tempting to write that, if innocent Palestinians must be killed by Israeli soldiers, better for them to be well-known and holders of US passports,” commented Gideon Levy, a columnist for the liberal Haaretz newspaper.[1] “At least then, the US State Department will voice a little displeasure – but not too much – about the senseless killing of one of its citizens by the soldiers of one of its allies.”

On Friday in East Jerusalem, Israeli police used stun grenades and batons to target mourners at Shireen’s funeral, triggering a further bout of international outrage against the Israeli authorities. The Biden administration expressed its harshest public rebuke of Israel to date. US Secretary of State, Antony Blinken, said Washington was “deeply troubled by the images of Israeli police intruding into the funeral procession of Palestinian American, Shireen Abu Akleh”, adding “every family deserves to lay their loved ones to rest in a dignified and unimpeded manner.”

This may leave Israel’s unwieldy coalition government in an awkward position. Led by Naftali Bennett, the center-right Prime Minister is committed to “shrinking the conflict” with the Palestinians rather than doing anything to resolve it. Already before Shireen’s death, a Muslim member of the coalition expressed concern about continuing to support Bennett.

The Ra’am party, led by Mansour Abbas, was uncomfortable about remaining in power after the government’s response to the recent spate of terrorist attacks, in which 19 people have been killed. Abbas is taking a huge risk amidst growing criticism from within the Israeli-Arab camp attacking him every day for being some kind of collaborator in Bennett’s government. But his strategy is that he will achieve long-term goals for Israel’s Palestinian citizens (21 per cent of the population) and, ultimately, be rewarded.

Israel has killed lots of journalists

According to the International Federation of Journalists (IFJ), at least 46 Palestinian journalists have been killed by Israel since the year 2000 and no one has been held to account. Israeli investigations, even when they are carried out by judges and public figures, have long failed to win the trust of the international community, or that of the Palestinians.

“Shireen’s killing was a message to the Palestinian people to try and kill our spirit,” said Mufaz Jaba, who attended the memorial procession last Thursday in Ramallah.[2] “Instead it is the opposite. Her death has helped unite Palestinian society and reminded the world of how important the Palestinian cause is.”

The correct and just solution to this sorrowful story – sadly repeated many times, though the usual victims are much less famous – must be to have an independent and international investigation into Shireen’s death. In a rare unanimous statement, the UN Security Council also called for “an immediate, thorough, transparent and impartial investigation into her killing.” Western governments, journalists’ organisations and international institutions must demand the same. If, as Israel has claimed, Abu Akleh was killed by Palestinian gunfire, it has nothing to fear from that sort of inquiry.

Ian Black is a visiting fellow at the Middle East Centre at the London School of Economics and Political Science (LSE). He worked for the Guardian newspaper from 1980 to 2016 as Middle East editor, diplomatic editor, European editor, and Middle East correspondent.

The views expressed in this article belong to the author and do not necessarily reflect the editorial policy of Middle East Monitor or Informed Comment .

is licensed under a Creative Commons Attribution-NonCommercial-ShareAlike 4.0 International License. I