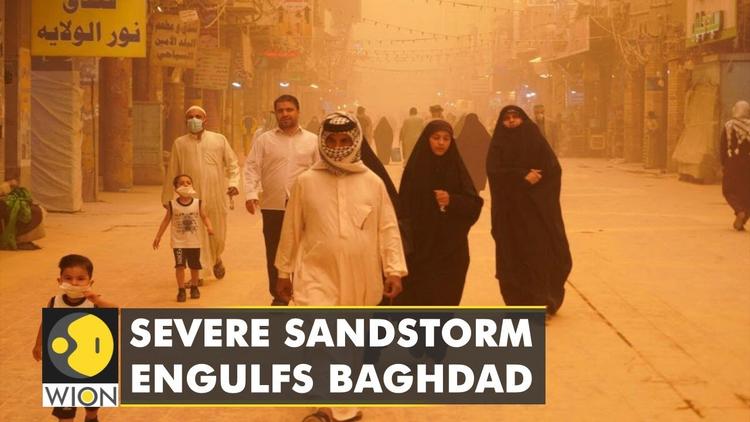 Ann Arbor (Informed Comment) – Some Middle East countries profit off oil and gas, but the very source of their prosperity is threatening their future, since burning these fossil fuels causes global heating, and you wouldn’t want the Middle East to be hotter than it already is. But it will be. The very oil that led the Bush administration to invade the country in 2003 is one of the fossil fuels, the burning of which is now making it unlivable.

Al Jazeera reports that Iraq is suffering its 8th major sand storm since the beginning of April, causing the Ministry of Health to declare a state of emergency and closing schools, universities, offices, airports and most commerce. At least 9 people have died of suffocation and some 4,000 have been sickened. Iraqis say that this number of sand storms for this part of the year is unprecedented.

Refugees in tent cities in the north and west of the country, many of them victims of the ISIL terrorist organization, are suffering the worst.

The country’s lakes and rivers are drying up, sparking alarm. This year’s rice crop looks to be dismal.

Hundreds of people in Baghdad and southern cities have been hospitalized because of difficulty in breathing.

Visibility is so low that Baghdad International Airport and other airports are closed until further notice.

In city streets, nobody can see more than a few yards ahead. A thick yellow dust blankets everything, even invading apartments and settling on furniture.

The sand storms have come at least once a week in recent weeks, as Iraqis say it is the worst wave of such storms in living memory.

Iraqi climatologists are blaming the wave of sand storms on climate change, lack of rainfall and desertification. In other words, on the climate emergency caused by our putting billions of tons of carbon dioxide into the atmosphere every year from burning petroleum, coal and gas. Iraq is estimated to be among the top 5 countries in the world most threatened by the climate emergency.

Emergency rooms were overwhelmed with thousands of patients having extreme difficulty in breathing.

Sayf al-Badr, spokesman for the Ministry of Health, urged people to just stay home, especially if they had respiration or heart problems, and to wear a mask.