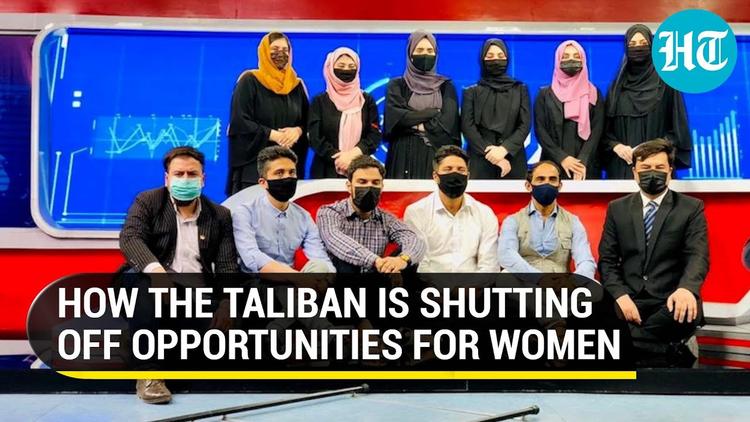 (RFL/RE ) – Male Afghan TV presenters have donned face masks on air in a show of solidarity with female colleagues who were ordered by the Taliban to cover their faces.

The Taliban issued a decree earlier this month that ordered women to cover their faces in public by wearing an all-encompassing burqa or niqab. The decree was then extended to female TV presenters.

After initially defying the order, female presenters on May 22 wore full veils that only exposed their eyes to viewers on major TV networks. On the same day, some of their male colleagues also covered their faces to protest the Taliban’s decree.

“We are in deep grief today,” Khpolwak Sapai, the head of Tolo News, Afghanistan’s leading broadcaster, said in a May 22 post on Facebook. Sapai posted photos of male and female employees all donning black face masks.

The images triggered a social media campaign in which others, including prominent journalists in other countries, have posted selfies of themselves with masks using the hashtag #FreeHerFace.

Since seizing power in August, the Taliban has imposed a series of restrictions on women, including on their appearance, access to work and education, and freedom of movement. The rules are reminiscent of the Taliban’s first stint in power in the 1990s, when the militant Islamists deprived women of their most basic rights.

Rights groups say the Taliban’s order for female TV presenters to cover their faces is an attempt to force them to quit their jobs and remove women from public life. Previously, the women on TV wore loose headscarves that only concealed their hair.

Female TV presenters have vowed to keep working and raise their voices despite the new order.

“We all know that the media is the voice of society and restrictions on the media mean the suppression of freedom of expression,” a female television presenter who did not want to be named told RFE/RL’s Radio Azadi.

“The new [decree] is illogical and it does not have any religious justification,” she said, adding that women should have the right to choose what they wear in public.

Tolo News presenter Banafsheh Binesh said her work was being hampered by the Taliban order.

“Presenting with a mask is very challenging,” Binesh told Radio Azadi. “When your face is covered, it puts a distance between the presenter and the audience.”

Yalda Ali, another presenter with Tolo News, suggested that the new decree was an attempt to take women off the air.

In a video posted online, she thanked her male colleagues for the show of solidarity while asking them how far they would be willing to go in supporting their female colleagues.

“When our voices will be declared [un-Islamic] and women will be removed from the media, will my male colleagues protest by resigning?” she added.

Mohammad Akif Sadeq Mohajir, the spokesman for the Taliban’s Ministry for the Promotion of Virtue and Prevention of Vice, claimed that the group was not against female presenters.

“We have no intention of removing them from the public scene or sidelining them, or stripping them of their right to work,” he told AFP.

But that has been rejected by Afghans and foreigners alike.

Female and male journalists and presenters across the world protested the decree by posting photos with face masks using the #FreeHerFace hashtag, including Spanish journalist and former politician Pilar Rahola and Jon Williams, the managing director of Ireland’s RTE News.

“Faces are windows to our souls and personalities. Our faces are our identities. It is our basic human right to show our identities. Also, when girls are enrolled in schools, they get an identity,” he wrote on Twitter on May 24 while posting a photo of himself with his wife, Toor Pekai Yousefzai, with both wearing face masks.

The New York-based Human Rights Watch (HRW) said in a May 23 statement that foreign diplomats meeting the Taliban should support the #FreeHerFace campaign and speak out against the Taliban’s violations of women’s rights.

“Women journalists are just the latest casualties in what has become the most serious women’s rights crisis in the world,” HRW said. “But the Taliban are not immovable, and coordinated pressure has the potential to impact their decisions. Donors and governments owe it to Afghan women and girls to do more to defend their rights.”

Since the Taliban regained power, many Afghan female journalists have been forced to quit their jobs. Others have fled the country while those remaining have gone into hiding.

In September, the French media watchdog Reporters Without Borders said that, despite the Taliban’s assurances, women journalists would be allowed to keep working, fewer than 100 of Kabul’s 700 women journalists were still working.

RFE/RL’s Radio Azadi is one of the most popular and trusted media outlets in Afghanistan. Nearly half of the country’s adult audience accesses Azadi’s reporting on a weekly basis.