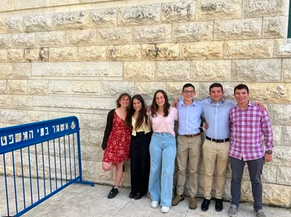 ( Traveling Twins ) – As we celebrate the annual Lag BaOmer pilgrimage to Mount Meron in Israel this week– the 33rd day of the Omer– it begs the question: why are we counting the Omer for 49 days in the first place? As we are in the midst of counting the Omer, it is an opportunity to think about the significance of this ritual. The counting of the Omer is inherently linked to the Jewish calendar. [During this time, religious Jews count the fifty days from the holy day of Passover, which honors the exodus from Egypt, to that of Shavuot, in memory of the revelation by God of the Torah, the Hebrew Pentateuch.]

This reminds us that the very first mitzvah [precept] given to the Jews when liberated as a nation from slavery was the Hebrew calendar, in the form of sanctifying the beginning of each Hebrew month based on the lunar cycle. According to the late Rabbi Joseph D. Soloveitchik, it was the first mitzvah because through it they could express their newly-acquired freedom. Slaves do not have control over their time but are vulnerable to outside forces. They have a schedule imposed on them. Upon emerging from slavery, the Jewish people were now endowed with the ability to control their own existence, and most dramatically, time was now their own. Thus, as free people, the Israelites were commanded to make their own calendar.

Today the Jews are free – whether in their homeland Israel or as citizens enjoying unprecedented, full equality in the overwhelming majority of countries. The countdown (or rather count up) from Passover to Shavuot is a reminder that we must strive to make the world a place where all people are free and able to control their own time.

Witnessing first hand the political reality of Israel as a state occupying and controlling the lives of millions of Palestinians, I see exactly the opposite of the freedom we commemorate with counting the Omer. I grew up learning and believing that Judaism emphasizes justice, but with the oppression perpetrated and maintained by the State of Israel, it’s hard to reconcile the Judaism that I believe in with these actions.

Friends and I Outside the Supreme Court

On April 7, I attended a Supreme Court hearing- also called Bagatz, an abbreviation meaning the High Court of Justice (HCJ)– and encountered behavior I had never foreseen at a formal institution. I attended a hearing challenging the procedure of allocating land in the West Bank to Jewish settlements behind closed doors. In Israel, all public lands must have public bids, yet not in the West Bank. The World Zionist Organization was given extensive power over land in the West Bank in the 80’s, against international law as this privatizes land allocation.

This hearing didn’t necessarily challenge the actual allocation of the land, rather simply the transparency of this allocation. During the hearing a man and teenage boy from an organization called “Im Tirtzu”, a far right settler organization, sat next to my friend Benji and started sending Benji all kinds of articles and links against Peace Now (the organization that filed the petition).

The drama got intense after the hearing, when the “Im Tirtzu” people followed us and they did not stop verbally attacking Michael Sfard (the lawyer) and Hagit Ofran (head of Peace Now settlement watch), calling them self-hating Jews. When they realized Michael and Hagit were explaining the case to us, they proclaimed to them “you are brainwashing these Conservative Jews from Nativ” and live-streamed the whole thing on Facebook.

After my own experience at the Supreme Court and witnessing just how little power and support peace makers receive in court and among the public, it didn’t surprise me that on May 4, the Supreme Court of Israel rejected the legal petitions of the South Hebron Hills [Misafer Yatta] residents.

I’ve written about these villages twice – here and here, having visited the area, talked to residents, heard both sides, and learned in depth about their situation. Whatever hope I had that the justices of the Supreme Court will intervene and allow these poor shepherds and farmers to continue living in their homes – has been crushed. Bagatz did the opposite, giving the green light to the State of Israel to demolish all their houses, expel them, and ruin their livelihoods.

The State argued they need this land for military training, calling it “Firing Zone 918” and the Supreme Court ruled this week that the State can now forcibly remove over 1,000 Palestinians from this area.

To add insult to injury, the justices imposed on these impoverished Palestinians – shepherds, farmers, day laborers – court costs totaling 40,000 NIS ($11,888)! (See paragraph 47 of Justice David Mintz’s decision). Really? Not only will their homes be demolished and lives totally upended, but they have to pay the state 40,000 Shekels just for filing this petition! How cruel and stone-hearted can you get?

I looked up this justice David Mintz – and no wonder, he’s a religious settler, learned his “Torah” at Yeshivat Gush Etzion, and now feels so superior to Palestinians that he needs to show them who’s boss. It’s sad that when he studied Torah at Gush Etzion, they did not teach him that the most frequently-cited mitzvah in the Torah is “do not mistreat the stranger in your land.” In fact, one of the 36 times this mitzvah is mentioned in the Torah happened last week in Parashat Kedoshim: “And when a stranger resides in your land, you are not to maltreat him” (Vayikra 19:33). When justices in the Supreme Court have such a twisted and perverted understanding of Judaism it is so disappointing and demoralizing.

“Proves once again that the occupied cannot expect justice from the occupier’s court. The decision, weaving baseless legal interpretation with decontextualized facts, makes it clear that there is no crime which the HCJ justices won’t find a way to legitimize.”

Reprinted with the author’s permission from the Traveling Twins ) blog.