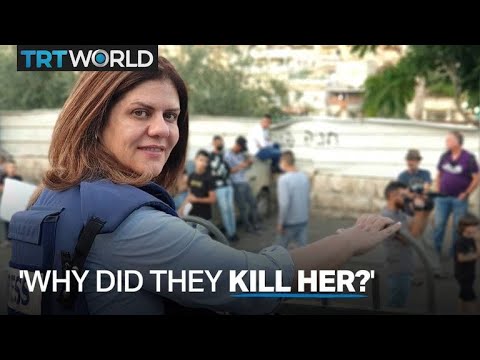 ( Middle East Monitor ) – She carried her belongings and went with the Press team into the field to begin the news coverage. She was ready to deliver her visual news report, as she had done for the past 25 years, but her last report made her the topic of the coverage, which was both shocking and bloody. The Israeli occupation army targeted her with a live bullet to the head during Press coverage from Jenin refugee camp in the northern West Bank and she fell to the ground, while her colleague, Press Producer, Ali Al-Samoudi, was wounded. Her colleagues rushed her in a car in a desperate attempt to rescue her, while the features of her exploded head changed, according to shocking clips documenting the incident. These were the last clips of Shireen Abu Akleh, who is renowned, as she is the Palestinian journalist who has always been present on Al-Jazeera TV and known by generations in every Arab home, present during the daily incidents and major events.

She was a very energetic journalist, always in the field to keep pace and report the land grabs, settlement expansion, home seizure and demolitions, the erection of the bleak grey walls in the West Bank and the crowds of Palestinians gathered at the humiliating military checkpoints set up by the occupation to impede their movement. Abu Akleh reported countless murders committed by the occupation forces in the field against Palestinian citizens of all ages, and then she was the subject of the same event in her last coverage from the field, when the occupation forces killed her in a gruesome manner on Wednesday morning, May 11, 2022, in Jenin camp.

Shireen Abu Akleh’s field coverages bear witness to a reality designed by the occupation in its own way. What she presented in her journalistic work depicts what successive Israeli governments have practiced on the ground, in the shadow of the so-called Middle East Peace Process and the failure of the promises made by the international community, the US, and Europe to establish a viable independent Palestinian state at the end of the negotiating marathon. The famous journalist covered campaigns and raids launched relentlessly by the occupation army in the West Bank, and she was present in Palestinian residential neighbourhoods threatened with demolition or the uprooting of residents for the benefit of Israeli settlers, such as the Sheikh Jarrah neighbourhood. She reported the usual daily arrests in the early hours of the day in various cities, villages and refugee camps, assassinations of a long list of Palestinian leaders, and many killings of Palestinian civilians on the side of the road, which end in the occupation army acquitting the soldiers and blaming the victims, many of whom are children and women.

Shireen Abu Akleh’s career achievements are truly amazing. During her Press work over a quarter of a century, the size of the illegal settlement presence in Jerusalem and the West Bank has doubled several times over, despite the international community’s continuous verbal condemnations. The occupation authorities built a bleak grey wall in the Palestinian territories in the depths of the West Bank and around Jerusalem, despite the also useless international condemnations. A huge number of military checkpoints and crossings were established to restrict the movement of the Palestinian people between cities and villages, while the Israeli settlers enjoy tempting facilities to attract them, and establish their control over the lands usurped from the Palestinian citizens. Her field Press reports witnessed the facts of the Israeli apartheid, which stifled the Palestinians’ opportunities for a free and dignified life in their country, continued to restrict them in housing, studies, work, resources and future life opportunities, and let the extremist settlement gangs loose to abuse the Palestinians, control their land, loot their homes, burn their crops and threaten to kill them as they chant “Mavet le-Aravim” or “Death to the Arabs.” This led to the fascist settler discourse entering Israeli political life, and one of its icons is the extremist settler Knesset member, Itamar Ben-Gvir, who carries out daily incitement campaigns against the Palestinians, and who immediately and brazenly justified the killing of Shireen Abu Akleh, simply because she was providing Press coverage in the field.

Of course, Shireen Abu Akleh realised that the occupation had a problem with the Press that reported the truth about it. She even said in previous statements that she had always felt that she was being targeted by both the occupation army and the armed settlers. Then, at the end of her career, Shireen Abu Akleh joined the list of journalists who were killed by the occupation army while practicing their profession. The Israeli forces suddenly snatched her away from Al-Jazeera and she was not spared by the fact that she was providing media coverage for a globally respected media network, or the fact that this Palestinian woman is an American citizen.

This gruesome killing attests to the fact that the Israeli soldiers’ fingers are so nimble on the trigger that there is no immunity for any Palestinian in the field. They know that they are backed by a government willing to justify every violation they commit, even when they target Press correspondents. Moreover, this assassination came against the backdrop of the first anniversary of the Israeli warplanes’ destruction of the Al-Jalaa Tower in Gaza City, which collapsed before the eyes of the world. This Tower housed the offices of international press agencies, including Associated Press and Al-Jazeera network, but the international community did not dare think to hold the Israeli government and its army leaders accountable for any of these war crimes.