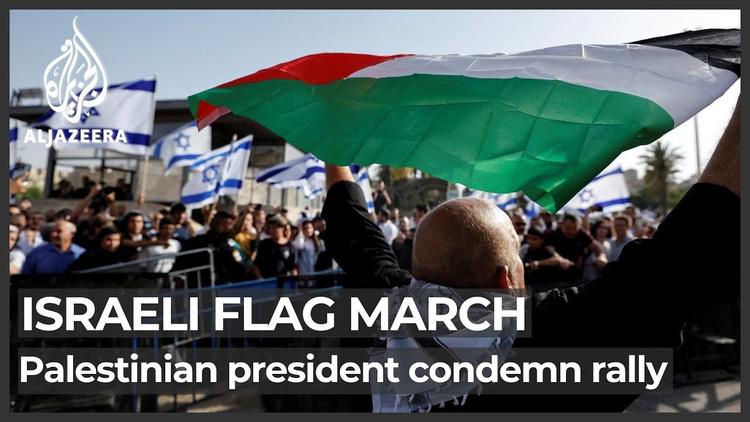 Ann Arbor (Informed Comment) – The Israeli newspaper Arab 48 reports that hundreds of Israeli squatters on Palestinian land organized taunting processions “of the flag” in various parts of the Occupied Palestinian West Bank under the protection of the Israeli army. At the same time, attacks on Palestinians continued as dozens of squatters stormed the al-Aqsa Mosque compound from the Mughrabi Gate, under the protection of Israeli security police, who limited the access of Palestinian Muslims to their own mosque.

The Palestine ministry of pious endowments estimated that nearly 100 Israeli squatters stormed the compound Monday morning, where they paraded around shouting taunts. The Ministry said that the squatters received explanations about the Second Temple, which stood on the site until it was destroyed by the Roman army in 70 A.D. after a Jewish revolt. They then performed worship ceremonies, even though that is forbidden by the Chief Rabbi and by secular Israeli courts. The rabbinate believes that the Third Temple can only be built by the messiah when he comes.

Some Israeli fascist groups were calling for the complete ethnic cleansing of all Palestinians and the wholesale destruction of the al-Aqsa Mosque, the third holiest shrine for the world’s 1.8 billion Muslims. Such an act would cause extreme radicalization. Usama Bin Laden gave Israeli actions in Jerusalem as one of the reasons for the September 11, 2001 attacks on New York and Washington, D.C.

Until the squatters left, the Israeli police kept dozens of Palestinians from entering the mosque.

On Sunday, tens of thousands of far right wing Israeli extremists, which is to say, fascists, had marched through Palestinian East Jerusalem as police locked down those city quarters, in honor of what they call “flag day,” which commemorates the 1967 Israeli military seizure of the Palestinian West Bank, Palestinian East Jerusalem, and the Gaza Strip, beginning an over 50-year-long military Occupation of 5 million stateless Palestinians, whose property is gradually being stolen from them. It is estimated that the occupation has cost the Palestinians tens of billions of dollars.

In 1939, the British colonial authorities had promised a Palestinian state within 10 years, but Zionist colonists organized to prevent that from ever happening.

In the West Bank, militant squatters marched on the road between Jenin and Nablus waving Israeli flags, attacking and beating Palestinians and throwing rocks at passing cars, as Israeli Occupation troops gave them protection.

In Urif, a Palestinian small town south of Nablus, Israeli squatters attacked a school, throwing rocks, and surrounded and trapped the teachers for half an hour. Palestinians gathered to fight them off and they withdrew outside the town. Israeli troops supporting the berserk squatters fired military-grade tear gas at the school, causing several of the teachers to suffer respiratory problems. Principal Ayid al-Qatt said that the teachers spirited the students out a back door when they saw the squatters coming.

The squatters destroyed several solar panels. Then townspeople gathered to confront them and the troops giving them cover.

In Hebron/ al-Khalil, squatters waving Israeli flags invaded Palestinian neighborhoods, shouting “Death to Arabs.” They caused the Occupation army to close the Palestinian retail district, as it maintained a robust troop presence to protect the squatters. The latter also stormed the Ibrahimi Mosque. Palestinian journalists and cameramen were sequestered by the Israeli army and not allowed to cover the attack.