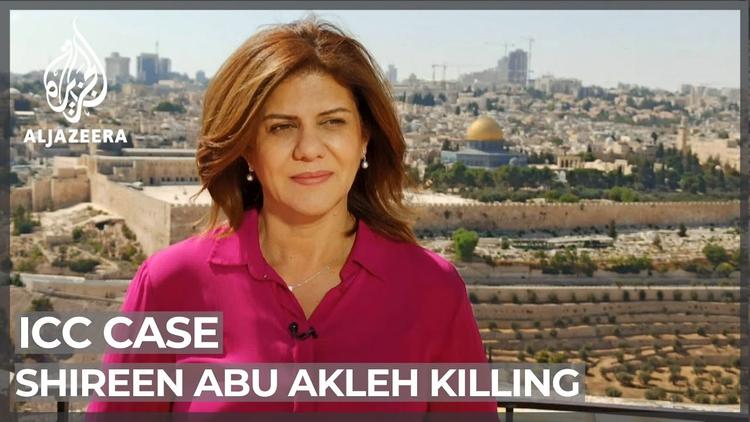 ( Middle East Monitor ) – Ex-Al Jazeera Chief, Wadah Khanfar, has blasted Western mainstream media over its failure to report honestly about the brutal reality of Israel’s illegal occupation. Speaking at a landmark conference in London yesterday, alongside a panel of representatives from all the major human rights groups, Khanfar paid tribute to journalist, Shireen Abu Akleh, who was killed by an Israeli sniper and urged the mainstream media to report honestly about the “naked truth of the apartheid regime that dehumanises Palestinians”. The killing of Abu Akleh is a “tipping point” said Khanfar, who Joined Al Jazeera at the same time as the slain journalist.

Khanfar was one of six speakers at the event organised by the International Centre of Justice for Palestinians. The five other guests were representatives of Amnesty International, Human Rights Watch, Al Haq, B’Tselem and Democracy in the Arab World Now (DAWN). All recently declared that Israel is committing the crimes of apartheid and took part in the event titled: Responding to Apartheid in Israel and the Occupied Palestinian Territories: the UK’s obligation under International Law.

Now the President of Al Sharq Forum, the 53-year-old accused the mainstream media of being complicit in a cover-up to hide the reality of the Israeli apartheid regime under “layers of lies, fabrication and obfuscation”. Why Israel is charged with the crime of apartheid was explained by representatives of the human rights group. In short, there are three components to the apartheid designation under international law: the existence of a regime of racial domination from the river to the sea in historic Palestine; the use of violence to maintain and preserve that regime and the intention to preserve a regime of racial domination. The consensus amongst all the main human rights group is that Israel meets all three conditions.

Khanfar predicts that the powerful image of Abu Akleh’s funeral will prove to be a pivotal moment in defeating Israel’s apartheid regime, in the same way as the funeral of slain African National Congress member and anti-apartheid activist, Ashley Krielas. The image of a police offer attempting to remove the ANC flag draped over the coffin of Kriel during his funeral in 1987 in Langa Township, Cape Town, became a powerful symbol of resistance which led to the release of the late Nelson Mandela. The flag of the ANC was illegal under white South African rule, in the same way as the flag of Palestine is proscribed under Israeli apartheid rule.

Appealing to journalists to end their dehumanisation of Palestinians, Khanfar urged them to live up to the moral standards and uphold the integrity of their position. “Who can hold them accountable?” asked Khanfar rhetorically, speaking of the “deadly impunity” enjoyed by Israel. “Western hegemony created Israel impunity … Israel is an apartheid state legally, politically and morally.”

Khanfar turned his focus to the wider horizon and swiped at the so called “Abraham Accords”. He mentioned his last appearance at the same London venue to speak at an event organised by MEMO to commemorate the killing of Jamal Khashoggi. In the four years between the murder of the Saudi journalist and that of Abu Akleh, an “alliance of authoritarian regime and apartheid regime” has become cemented said Khanfar. They seek to “dominate, suffocate and subjugate all calls for democracy” he warned, while stressing on the need to form an “international front to challenge the authoritarian and apartheid alliance”.

The common theme in the remarks of the six main speakers was Israel’s impunity. Despite consensus amongst major human rights groups, Western governments have been reluctant – if not hostile – to their findings. None, however, have disputed the facts of the reports or explained why they dispute the conclusion. Selma Dabbagh, ICJP’s Chief Operating Officer, made impunity the theme of her opening remarks. “If the law is strong enough to defend Palestinians, it is strong enough to defend anyone,” said Dabbagh. All six speakers viewed ending Israel’s illegal occupation and apartheid regime as a major stress-test for the international community.

B’Tselem’s Executive Director, Hagai El-Ad, began the first of the six main presentations. He spoke of the facts and circumstances that led to the rights group’s designation of Israel as an apartheid state. “There is not a single square inch where Jewish and Palestinians are equal,” said El-Ad, describing Israel’s apartheid regime. “The policy of Jewish supremacy is everywhere,” he continued, explaining that in the territory between the River Jordan and Mediterranean Sea, known as historic Palestine, there exists a “one state reality controlled by a single regime”, which he stressed is committing the crime of apartheid.

What is the responsibility of governments when a country violates a fundamental principle of international law known as peremptory norm? Solomon Sacco of Amnesty International offered an answer. He explained that, when a country violates a peremptory norm such as through the practice of slavey, genocide, torture, and apartheid, they have an obligation to act. No derogation is permitted, and States are obligated to end their support of a government accused of violating peremptory norms. Sacco called on all States to fulfil their obligation under international law, and not to be complicit in the maintenance of a regime that commits the crime of apartheid.

Not only are our governments failing to uphold peremptory norms of international law by continuing their trade with Israel, they are undermining their own liberal democratic identity to preserve ties with the apartheid State, suggested Sarah Leah Whitson, Executive Director of DAWN. Though facts, law and public opinion are converging on Israel’s practice of apartheid, Western governments are passing illiberal laws and endangering the basic principal of free speech by seeking to silence critics of Israel, Whitson explained.

“UK, US must choose to preserve Israel’s interest or the interest of our own citizens,” said Whitson, warning of the threat posed by the highly controversial International Holocaust Remembrance Alliance (IHRA) definition of anti-Semitism. Several political parties and governments have adopted the definition. Seven of the eleven examples in the IHRA conflate criticism of Israel with anti-Jewish racism. Critics, including its main drafter, have said that the adoption of the IHRA definition will have a chilling effect on free speech. “What is the cost of defending Israeli apartheid?” asked Whitson. What does it say about a regime, if calls for equal rights trigger an “earthquake in Israel?”

For the Israel and Palestine Director of Human Rights Watch, Omar Shakir, the reports are the starting point in a long process to bringing down the Israeli apartheid regime. “We are in a unique moment in the history of Israel Palestine,” said Shakir. “Rights groups and global civil society have a clear-eyed assessment and share the same determination.” Ending Israeli’s apartheid regime begins with recognising Israel for what it is, and naming crimes honestly and diagnosing the problem correctly, explained Shakir. “A 55-year occupation is not temporary. Denial of rights is not simply an occupation. Structural repression is not a conflict,” said Shakir. “A single system designed to privilege one over another, alongside apartheid, is not a democracy.” Shakir listed major world leaders, members of the Israeli Knesset and hundreds of European politicians who have warned about Israel’s slide to apartheid. We are way past that moment, said Shakir, adding that the “fig-leaf” of failed peace talks has done nothing over the decades, except to mask the crime of apartheid committed by Israel.

Apartheid is just one of the many crimes Israel has committed over the decades in its takeover of Palestine, argued Shawan Jabarin, Executive Director of Al-Haq. He claimed that, in addition to the crime of preserving and maintaining a racist state seeking Jewish supremacy, ethnic cleansing and settler colonialism targeting Palestinian existence are Israel’s other violations of international law. He said that the UK, having issued the Balfour Declaration, has a “historical obligation” to aid Palestinians in combating the apartheid regime.