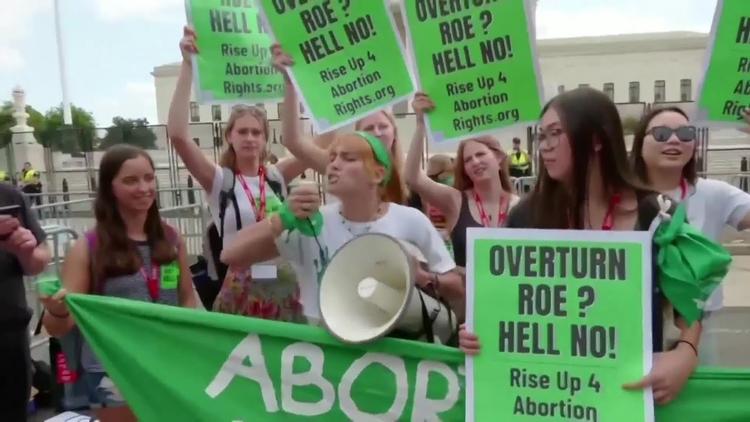 It’s striking that, as with many other gender equality issues, the positions of men in relation to abortion are rarely discussed.

In some regards, this is for good reasons. Abortion is a healthcare issue for women (and trans and non-binary people with uteruses). It’s about them having the right to determine what happens to their own bodies. The fact that, despite all the medical knowledge and tools at our disposal in the 21st century, abortion rights remain under threat in so many countries arguably connects to the desire of patriarchal societies to exercise control over women’s freedom – and deep-rooted patriarchal insecurities about reproductive processes which men don’t have power over. Even now in the UK, for example, a woman needs approval from two doctors to have an abortion.

Politics across the globe remains highly masculinised, so it is largely men in positions of power who are voting to curtail women’s bodily autonomy. Stark photos of male lawmakers signing off anti-abortion legislation remind us of this.

Similarly, many of the people involved in the anti-abortion movement, such as those protesting outside of clinics with often misleading imagery and messaging about dead foetuses, intimidating patients and staff, are men.

Yet it’s also possible for male politicians to vote to improve abortion rights. When the UK’s 1967 Abortion Act was enacted, 96% of MPs were men. One of us previously interviewed the former Labour MP Peter Jackson, whose commitment was fuelled by a woman in his constituency being imprisoned for carrying out abortions. On his role in getting the legislation through parliament, Jackson remarked:

If you ask me what was my most important contribution, it would be my role in bringing about rights for women which they never had before.

So we need more male parliamentarians to recognise their responsibility to act as allies to women. But whilst the situation has improved since the 1960s, we also need much better representation of women in politics, to increase the likelihood that women’s needs and experiences will actually be taken into account in decision-making.

How men benefit from reproductive freedom

Of course, pregnancy would also rarely happen without the presence of (cisgender) men. It’s remarkable how little this is recognised in discussions about abortion. You might sometimes be left thinking women somehow become pregnant by themselves.

It remains a stubborn gender norm in heterosexual relationships that responsibility for day-to-day management of contraception and other aspects of sexual and reproductive health is disproportionately placed on women – even though sex is simultaneously presented as something primarily initiated by men and for male pleasure. We don’t engage nearly enough with men and boys about healthy sex and relationships, and their role in the sexual and reproductive wellbeing of themselves and their partners.

Boys still often receive little education about women’s reproductive health, such as learning about menstruation. At times, abortion debates illustrate this, with male lawmakers showing a lack of basic understanding about female reproduction. It’s also notable that in the UK, rates of vasectomy have been declining in recent years, despite it being a relatively simple procedure.

An important step forward would therefore be for men to recognise how much we gain from women’s right to an abortion, too. Given that an estimated 45% of pregnancies in the UK are unplanned, countless men (including many in positions of power) who were not ready to be parents or had no intention of becoming a parent have been able to live freer lives and enjoy fuller careers because their sexual partner was able to obtain an abortion. With the freedom to only have children when people feel ready to do so, a man could potentially be saved from unwanted parenthood many more times than a woman over the course of his life – without even necessarily being aware of it.

The vast majority of people (86%) in the UK, including men, support the right to an abortion. The majority of people in the US are also in favour. But you might not know it, given the silence of most men beyond the vocal minority who are opposed.

Sexual and reproductive health and parenthood are men’s business and responsibility too, and we would all benefit from talking about them more openly and honestly – with our friends, our sons and by joining calls for social change, as well as reflecting on our own practices.

Making decisions about abortion can be difficult and can lead to a range of complex emotions, which might be hard to know how to deal with when it’s so little discussed. In a conversation we recently had with a gender equality activist in Ireland, he articulated that people telling their personal stories of what abortion meant to their lives moved the conversation away from abstractions about zygotes and embryos. He felt this was a key factor in the landslide Irish vote to legalise abortion in 2018.

Of course, this shouldn’t mean men taking over the conversation or making it all about us. Men can also have too much influence on pregnancy, by seeking to impose their wishes – and reproductive coercion is a common aspect of domestic abuse. It’s important to recognise that this is first and foremost about supporting women’s right to choose what happens to their bodies – and listening much more to their needs and experiences.

However, there have been beneficial outcomes in many men’s lives because of decisions to have an abortion. Perhaps this fundamental human right will only become better protected if we start acknowledging that more.