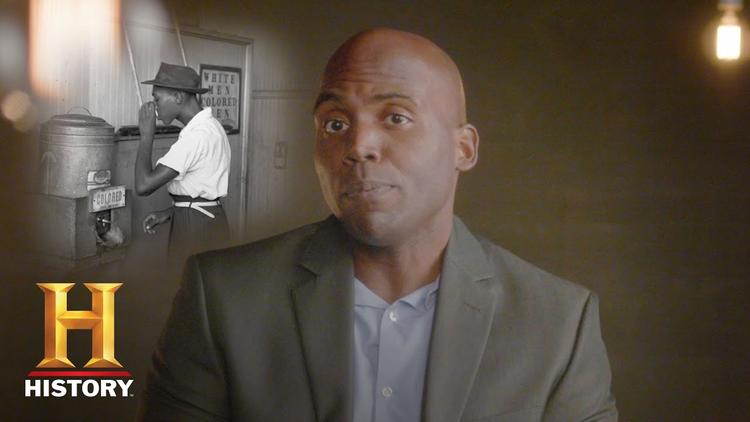 “Although we all learn about the 1857 Dred Scott decision in school, we aren’t usually told that it actually should be called the Harriet and Dred Scott decision, since Scott’s wife was also a plaintiff in the suit. History.com explains that Dred Scott had been enslaved by Dr. John Emerson. Emerson then moved with Scott first to Illinois and then to the Wisconsin territory, where slavery was not allowed, but where Emerson nevertheless kept Scott in bondage. In Wisconsin he allowed Scott to marry Harriet Robinson in a civil ceremony, having arranged to buy her (what a creepy phrase). Dr. Emerson traveled with them some more and died in Iowa. He had by that time acquired a wife, Irene.

The two enslaved persons were inherited by Irene Emerson like so many sticks of furniture, and despite their pleas, Irene refused to free them. She returned with them to St. Louis. Dred and Harriet then sued her, with the help of abolitionists and church groups, because of a Missouri law saying that if an enslaved person was taken to a free state, that individual could not thereafter be re-enslaved. Missouri also allowed free Blacks to sue in state courts. They won in a lower level court in 1850, then in 1852 the Missouri Supreme Court combined Dred’s and Harriet’s separate lawsuits into one and then ruled against them. They and their abolitionist backers took the case to the federal courts and ultimately to the US Supreme Court, which in 1857 ruled against them. Harriet was devastated, according to this capsule biography of her…

In his opinion, Chief Justice Roger Taney said that members of the “Negro race” were not U.S. citizens and that they had no federal rights at all that white men were bound to respect, including the right to sue in federal court. He actually spoke of whites as the “citizen race” to the exclusion of “Negroes” and “Indians,” who were not eligible (unlike white immigrants from Europe) for naturalization.”

This horrible Nazi-like ruling was undone by the Fourteenth Amendment, which recognized as citizens all those born in the United States. Republican fascists are plotting to repeal this amendment.

2. Plessy v. Ferguson (1896): Some readers may have seen the Richard Attenborough film, Gandhi, which contains a scene of young Indian lawyer Mohandas K Gandhi in Apartheid South Africa being unceremoniously ejected from a train for trying to sit in the white section. The story of Plessy is very similar.

“that petitioner was a citizen of the United States and a resident of the state of Louisiana, of mixed descent, in the proportion of seven-e ghths Caucasian and one-eighth African blood; that the mixture of colored blood was not discernible in him, and that he was entitled to every recognition, right, privilege, and immunity secured to the citizens of the United States of the white race by its constitution and laws; that on June 7, 1892, he engaged and paid for a first-class passage on the East Louisiana Railway, from New Orleans to Covington, in the same state, and thereupon entered a passenger train, and took possession of a vacant seat in a coach where passengers of the white race were accommodated; that such railroad company was incorporated by the laws of Louisiana as a common carrier, and was not authorized to distinguish between citizens according to their race, but, notwithstanding this, petitioner was required by the conductor, under penalty of ejection from said train and imprisonment, to vacate said coach, and occupy another seat, in a coach assigned by said company for persons not of the white race, and for no other reason than that petitioner was of the colored race; that, upon petitioner’s refusal to comply with such order, he was, with the aid of a police officer, forcibly ejected from said coach, and hurried off to, and imprisoned in, the parish jail of New Orleans.”

Homer Plessy was only an 8th Black and people couldn’t even tell he wasn’t just white.

The Supreme Court noted that the train company’s charter said that it would provide separate but equal train accommodations for people of different races, and agreed that that would just peachy. The court thus authorized six and a half decades of radical white nationalist Jim Crow laws and rule in the American South, during which some 4,000 African-Americans were lynched and most were prevented from voting or holding high office.

Contrary to what the far right judges on the court just alleged, Plessy was never overturned. A much more narrow ruling in Brown v. Board of Education (1954) only found that the separate but equal notion was not applicable to public schools. The rest of Jim Crow was only gotten rid of by legislation — the Civil Rights Act of 1964 and the Voting rights Act of 1965. Usually it is the legislature that cleans up the court’s messes. And the legislature only acted when successfully pressured by the Civil Rights and Black Power movements. Take a lesson, folks.

3. Hammer v. Dagenhart (1918): In 1918, the Supreme Court said that Congress couldn’t prohibit child labor at a cotton mill in North Carolina using its constitutional remit to regulate interstate commerce, because the boys being made to work weren’t transported across state lines (!) Uh, was the cotton cloth they helped make exported? Why was the Supreme Court so interested in seeing children made to work in factories?

Hammer was overturned in 1941 when the Supreme Court of that era accepted the constitutionality of the Fair Labor Standards Act in U.S. v. Darby Lumber Company (1941).

4. Korematsu v. United States (1944). In this decision the wretched Supreme Court decided that it had been all right for the US government to expel American citizens from their homes and round them up into concentration camps, costing them everything they had. The citizens involved were Japanese-Americans rather than white, you will notice. The fascist justices actually wrote,

“We uphold the exclusion order as of the time it was made and when the petitioner violated it . . . In doing so, we are not unmindful of the hardships imposed by it upon a large group of American citizens . . . But hardships are part of war, and war is an aggregation of hardships. All citizens alike, both in and out of uniform, feel the impact of war in greater or lesser measure. Citizenship has its responsibilities as well as its privileges, and in time of war the burden is always heavier.”

A bigger load of horse hockey was never shoveled into the faces of the American public. Americans of European descent were not treated this way, so why did the burden happen to fall on Asian-Americans. Gee, I wonder what the difference could be?

5. Citizens United v. FEC (2010). The monumentally wicked and terminally stupid John Roberts found that speech is the same as money, and so the First Amendment protects the right of rich people to buy congressmen. Roberts will go down in history as another Roger B. Taney, whose rigid ideology, imposed on the American people, cast the country into Civil War in the Dred Scott ruling.

Money is not speech. Money is money. If we cannot regulate money in politics, as France, Germany and other civilized countries do, then we will become a plutocratic dictatorship. Ooops. I think that has already happened.

In many ways, Citizen United allowed the Federalist Society and its billionaire backers to buy the Supreme Court, too, and to deprive women of the right to control their own bodies. Roberts signed on to that. Now they are going to try to invade our bodily privacy in a whole host of other arenas, throwing the country into decades of unrest and potential chaos. They may also prevent the government from dealing with the Climate Emergency by limiting the EPA’s ability to curb deadly carbon dioxide emissions that are wrecking the planet. There will also be violence over that.

As for the sixth in this series, which may be the second worst after Dred Scott, which caused the Civil War, you all know what that is, since it was just issued this week. Dobbs v. Jackson. It is the opening salvo of more such decisions inviting state governments to regulate our genitals and family life, which is the stealth agenda of the allegedly anti-government Republican Party.

When a small clique of unelected ideologues impose their will on 330 million people in a way that offends the vast majority of them, it calls forth a movement. Malcolm X and Martin Luther King each in his own way, coming from Islam and from Christianity, knew what to do about Jim Crow. They organized. Eventually even the Congress became concerned enough to strike down segregation and interference in voting rights. We may need to do the second all over again in this generation. And now there is the challenge of freeing the bodies of American women, and, indeed, of all Americans, from the death grip of the New Puritan Plutocrats.