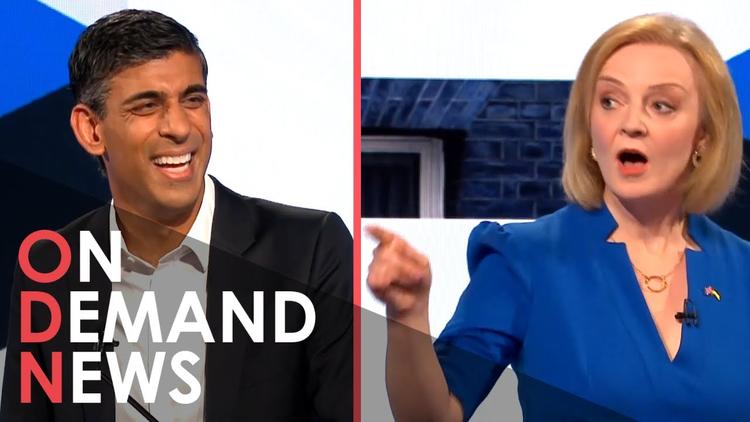 Oxford (Special to Informed Comment) – The two candidates selected by the Conservative members of the British Parliament to replace Boris Johnson, Liz Truss and Rishi Sunak, went head-to-head in their first TV debate organized by the BBC on Monday night, 25 July. The new selection of Conservative Party leader and therefore Prime Minister comes after the current Prime Minister Boris Johnson was forced to resign.

After of a series of scandals, Johnson’s opponents called for a vote of confidence in Parliament on 6th June. Although he won the support of 211 Conservative MPs, 148 MPs or 41% of Conservative MPs voted against him. The size of the rebellion against him encouraged his opponents to pile the pressure on him.

A number of new scandals provided an excuse to push Johnson out of office. Last February, Johnson appointed Chris Pincher as the Government Deputy Chief Whip. After allegedly groping two men while he was drunk, Pincher resigned on 30 June 2022. Johnson who had allegedly described him as “Pincher by name, pincher by nature”, denied that he had known of the extent of his sexual misconduct, but the intervention of a former top civil servant Lord Simon McDonald who in an interview with the BBC confirmed that Johnson had been informed of the incident sealed his fate.

During Prime Minister’s Question Time on 6th July, a Conservative MP, Tim Loughton, asked “Does the prime minister think there are any circumstances in which he should resign?” Johnson replied that only a couple of years ago he had won a landslide election with the biggest Tory majority since 1987, and that it was his duty to continue and implement his mandate. However, during the day, 51 ministers including some of the most prominent members of his cabinet resigned and by the evening he discovered that he had no government to run. On 7th July, an unrepentant Johnson appeared in front of the black door of 10 Downing Street and announced his resignation. He said that he had wanted to deliver his mandate, “But as we’ve seen, at Westminster the herd instinct is powerful and when the herd moves it moves, and, my friends, in politics no one is remotely indispensable.”

According to the British Constitution, the members of the ruling party in parliament, in this case the Conservative Party, select two candidates out of all those who have put themselves forward for election in a series of secret ballots, and then the members of the party in the country select one of them to be the party leader and therefore the Prime Minister.

A remarkable aspect of the race among the candidates vying to be the next British prime minister has been that out of eleven original candidates, five of them were either foreign born or were the children of immigrant families.

Sajid Javid (born 1969), the former Chancellor of Exchequer, Home Secretary and Health Secretary, is the son of Muslim Pakistani Punjabi parents who migrated to the UK in the 1960’s.

Nadhim Zahawi (1967) is an Iraqi-born Kurdish Muslim politician whose parents fled to England when he was 11 years old. He also served as the last Chancellor of Exchequer and a health minister.

Suella Braverman (1980), a lawyer who has served as the Attorney General for England and Wales, is the daughter of Indian parents who migrated to Britain from Kenya and Mauritius. Her mother was born to a Hindu Tamil Mauritius family. Braverman herself is a Buddhist.

Kemi Badenoch (1980) is the daughter of Nigerian parents, who spent part of her childhood in Lagos and the United States before returning to the United Kingdom at 16. She was elected to the House of Commons in 2017 and when Boris Johnson became Prime Minister in July 2019, he appointed Badenoch as Parliamentary Under-Secretary of State for Children and Families, and the following year as Exchequer Secretary to the Treasury and in 2021 she was appointed as Minister of State for Local Government, Faith and Communities and served as Minister of State for Equalities from 2021 to 2022.

Rishi Sunak (1980) who served as Chancellor of Exchequer from 2020 until he resigned in protest at Johnson’s policies, was born in Southampton to Punjabi parents, and is a practicing Hindu. Sunak is believed to be the richest man in the House of Commons, thanks to his past career as a banker and his marriage to Ms Murty, the daughter of one of India’s most successful entrepreneurs. The Sunday Times Rich List values Mr Sunak and Ms. Murty’s fortune at £730m (nearly $860m). Before going into politics Sunak worked for the US investment bank Goldman Sachs and had a U.S. Green Card.

This says a great deal about how much the Conservative Party has changed during the past few decades. In the past, Conservative cabinets were mainly staffed by rich and privileged white people educated at Eton or one of the other exclusive private schools, moving almost automatically to Oxbridge. Mrs Thatcher was the first Conservative prime minister to have a relatively large number of Jewish ministers from East European origins. The late patrician prime minister, Harold Macmillan, sarcastically quipped that Mrs Thatcher had filled her cabinet with Estonians, instead of Etonians.

Boris Johnson’s cabinet by contrast was the most diverse cabinet in British history, with some of the most prominent posts in the cabinet, including the Chancellor or Exchequer, Home Secretary, Education Secretary, Business Secretary, Secretary of State for Europe and North America, etc being held by the children of immigrants. It is no wonder that some of the leading candidates for succeeding him also come from diverse backgrounds.

The election (or rather selection) of the next British Prime Minister is rather bizarre. Johnson’s replacement will not be elected by the 47 million adults registered to vote, but by around 160,000 grassroots Conservative Party members who are not at all representative of the British population as a whole. The members of this rather exclusive club can start voting from the beginning of next week, and the winner will be announced on September 5.

According to the most recent research, 63% of Conservative Party members are male, and 37% female. 6% are under 24-years-old, 36% are aged 25 to 49-years-old, 19% are aged between 50 and 64-years-old, and 39% are over 65. 24% backed Remain in the EU referendum, and 76% backed Leave. 56% live in London and the south-east of England, 18% in the Midlands and Wales, 20% in the north of England and 6% in Scotland. 80% belong to the highest social economic groups known as ABC1, with an income of more than £100,000 a year. Therefore, a very small number of mainly white, middle-aged, wealthy, male Brexiters, most of whom live in the affluent London or south-east of England, will select the next British prime minister who will be in office until the next election which is due to be held on 17 December 2024.

So far, there has been little discussion of issues such as inflation, climate change, the cost of living, levelling up, to name a few. Instead, both candidates are competing with each other to see which of them can appeal most to right-wing Conservative voters. Both of them are in favour of Brexit. Although initially Liz Truss was a Remainer, but since joining Johnson’s cabinet, she has been among the most ardent Brexiters. Both of them are in favour of overriding the Northern Ireland Protocol, and deporting asylum seekers to Rwanda. Truss has announced plans for a “bonfire” of EU laws retained after Brexit. She has promised to scrap or replace all such laws which she argues hinder growth, by the end of 2023.

She also promises immediate tax cuts, while Sunak who wishes to portray himself as a fiscally responsible candidate believes that tax cuts must start next year, after he has tamed the rate of inflation at 9.1%, the highest for 40 years.

Both Sunak and Truss are staunchly pro-NATO and believe in maintaining close ties with the United States. Both of them will continue British support for Volodymyr Zelensky’s government and believe that Russian forces must be forced out of all the territory they have occupied in Ukraine, including Crimea.

Rishi Sunak has said that he would put the UK on a “crisis footing” on day one as PM. He believes the country is facing a national emergency, including on the economy, the NHS and migration, and therefore radicalism, change and moral courage is needed in order to overcome the problems that Britain is facing.

In an interview with the Times, he said a “business-as-usual mentality isn’t going to cut it” when it comes to dealing with challenges that are “staring us in the face”. “Having been inside government I think the system just isn’t working as well as it should. And the challenges that I’m talking about, they’re not abstract, they’re not things that are coming long down the track,” he said.

It is strange that both candidates are very critical of the government in which they served as Chancellor of Exchequer and Foreign Secretary.

Most polls show that Liz Truss is the favourite among the Conservative voters and the bookies. According to YouGov’s latest poll, Truss is leading Sunak by 62% to 38% among Tory members, a lead that will be difficult to overturn. A sizeable number of Conservatives believe that Sunak stabbed the prime minister in the back, and there seems to have been a concerted effort by Johnson’s supporters to prevent Sunak from winning the vote. A recent YouGov poll showed that even now 25% of Tories wish that Boris Johnson was still Prime Minister, 60% would prefer someone else and 15% don’t know.

With a difficult winter ahead as the result of Covid, a looming recession, high inflation, exorbitant gas and energy prices, an accelerating climate crisis, the now emerging problems of Brexit seen during the past few days in long lines of cars and trucks stuck at border crossing points to Europe, ongoing war in Ukraine threatening to get out of hand, and the unresolved Northern Ireland Protocol, the next prime minister will have a mountain to climb. No matter which of the two candidates wins, it is clear that the next government will be more populist and more right-wing. Whether with such policies they can defeat the Labor Party in the next general election remains to be seen.