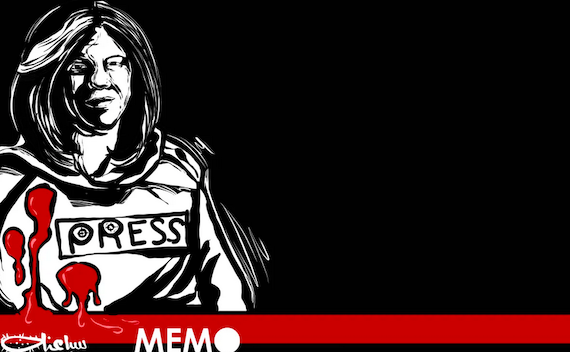 ( Middle East Monitor) – The Palestinian Authority’s refusal to hand over the bullet which killed Palestinian journalist Shireen Abu Akleh was short lived. So was any hypothetical expectation of justice from an Israeli investigation supervised by the US. According to the Israel Defence Forces (IDF), Israeli soldiers did not fire deliberately at Abu Akleh in Jenin on 11 May, thus refuting accusations of her death being an extrajudicial killing. Moreover, the IDF stated that the source of fire “could not be determined based on the available information.”

The US State Department’s press release on this matter boosts Israeli impunity. The forensic tests were performed at the Israeli police lab in Jerusalem, in the presence of a US security coordinator and an expert on ballistics. “Ballistic experts determined the bullet was badly damaged, which prevented a clear conclusion,” declared US State Department Spokesman Ned Price, while calling Abu Akleh’s killing “a result of tragic circumstances.” Colonial violence has yet to enter the US government’s stock repertoire of phrases. So, apparently, has “whitewash”.

Only one concession was given: that the IDF was “likely responsible” for Abu Akleh’s killing. Only the US State Department prefers to say “death” rather than “killing”, no doubt to reinforce the dissociation between the act of shooting a bullet at a human being and the deadly end result.

There were expectations earlier that Abu Akleh’s killing would prompt some form of justice, given her prominence as a journalist with Al Jazeera, as well as her dual Palestinian-US nationality. Mainstream media, including the New York Times and CNN placed the blame directly upon Israel. It was a rare occurrence to read the words “targeted killing” in a mainstream media article. But now the diplomats have stepped in to shield the IDF from the slightest reputational damage to its absurd claim to be the most moral army in the world. So no surprise there.

Abu Akleh’s case was given a lot of attention in the media, yet the commotion faded away, albeit gradually, as often happens with such incidents involving Israelis. “Justice for Shireen” became a slogan for a brief period, while Israel simply waited for the furore to die down before it could list the journalist’s murder as yet another notch on its occupation’s obscenely high tally of collateral damage.

Israel isolates its crimes from its settler-colonial occupation of Palestine, as does the UN through its selective focus on specific international law violations. While Abu Akleh’s murder deserves its own specific focus, of course, losing sight of the fact that this was yet another extrajudicial killing in Israel’s decades-long history of targeting Palestinian civilians only adds to Israel’s impunity.

The IDF killed Abu Akleh, yet evidence is purportedly “inconclusive”, despite the existence of eyewitness accounts and video film. This claim resonates with the way that the international community and human rights organisations impart details of Israeli international law violations and war crimes. The element of doubt is never missing from reports and investigations, even when evidence is readily available to prove culpability.

Nevertheless, in response to the US State Department’s declaration, the Israeli human rights organisation B’Tselem said, “As far as Israel is concerned, its policy regarding the killing of Palestinians has never been anything other than an organised whitewash meant to enable the continuation of the killings with impunity, and it is no different when it comes to a US citizen as in the current case.”

Israel’s narrative is that Shireen Abu Akleh was one of many disposable Palestinians which the state has killed since the 1948 Nakba. Eliminate the word disposable, and the enormity of Israel’s culpability looms large. Had the Palestinian leadership, along with the international community, refused to isolate Israel’s atrocities into separate incidents, its impunity would by now have been considered a legitimate target for justice. Instead, it has been boosted by the US whitewash of Abu Akleh’s killing.