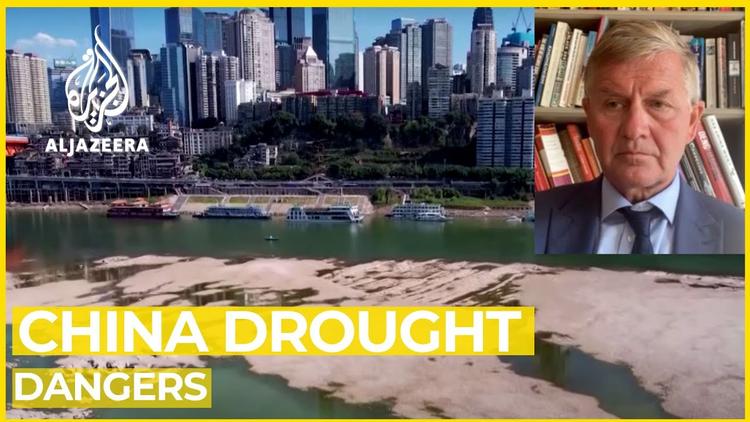 ( China Dialogue ) – Since mid-June, China has been facing the most intense and enduring heat waves since records began in 1961, according to the National Climate Centre. In the past week, the middle and lower Yangtze River basin has experienced exceptionally hot and dry spells in what is supposed to be the flood season, forcing provinces to suspend or restrict power to businesses to ensure supply for households.

The Poyang and Dongting lakes, the two largest lakes in the Yangtze basin, as well as part of the river itself, are experiencing water levels 4.7 to 5.7 metres lower than the historical average and the lowest since records began. In Chongqing, 51 rivers are cut off and 24 reservoirs have dried up. Where the Yangtze reaches the sea in Shanghai, the river is experiencing saltwater intrusion, which is usually a winter phenomenon, due to a lack of freshwater running against it. This is threatening the municipal water supply.

An expert told the press that there has been a tendency toward more frequent and intense drought in the Yangtze basin in recent years, with the current drought caused by an atmospheric circulation anomaly.

Power shortages are particularly severe in Sichuan, where hydropower accounts for nearly 80% of the energy mix. On Monday, the provincial government announced the suspension of power to a wide range of industrial users for 6 days, including those once listed as priority users. On Tuesday, Chongqing also announced power restrictions for business users until next Wednesday. In addition, Anhui, Zhejiang and Jiangsu provinces are reportedly running on tight electricity supplies with rationing schemes activated.

This is having a major impact on several strategic industries with global supply chains. Sichuan, in particular, is a major production hub for lithium salts, lithium batteries, silicon materials for solar PV, and semiconductors. Chongqing is also a key hub for electronics manufacturing.