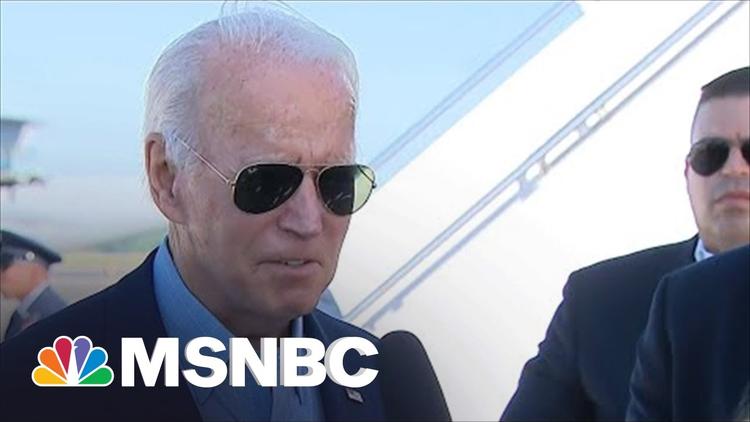 Ann Arbor (Informed Comment) – Joe Biden has been easy for the pundit class to write off. He isn’t, unlike Bill Clinton or Barack Obama, a great speechifier. He overcame his childhood stutter, but he still sometimes hesitates just as he gets to an applause line. He is still the little guy who got picked on, still scrapping to come back from behind. But what a scrapper! Supporters used to say of Harry Truman, also a man from the working class, “Give’m hell, Harry.” Now Joe is givin’em hell.

Biden’s achievements are by now legion, especially compared to his predecessors. Aside from a big tax cut for his rich buddies, Trump accomplished nothing. Nothing. All that big talk about redoing US infrastructure and making La Guardia like Dubai’s airport was so much hot air. Mostly he seems to have sat around in his pajamas watching Fox “News.” He constantly talked up his own alleged achievements. But he lied. The trade deficit with China was the same when he went out of office as when he came in. The percentage of the US economy devoted to manufacturing shrank on his watch. He so badly mishandled the pandemic that he lost 22 million jobs, more than any president in history.

The Republican Party did not let Barack Obama accomplish much of lasting consequence with the exception of Obamacare, which passed before he lost Congress in 2010.

George W. Bush squandered trillions on his fruitless Middle East wars and accomplished little domestically before his anti-regulation policies pushed the economy off the cliff in his last year of office. What is it with Republican presidents and losing millions of jobs?

Bill Clinton was a good manager of affairs but his tilt to the right made it impossible for him to do anything that would structurally improve the country. In fact he weakened the social safety net.

Biden came into office under the cloud of the pandemic and Trump’s lackadaisical response to it, which resulted in hundreds of thousands of deaths. It is true that Biden had the advantage that the vaccines had been developed, in part with Trump’s investment in Moderna. (Pfizer marketed the German Biontech vaccine). But under Trump, few federal resources had been mobilized and one leak suggested that Jared Kushner deliberately hurt New York’s response to punish it for voting Democratic.

Biden mobilized the US military to provide vaccinators, because there were too few civilian ones, and coordinated with states and localities. In 6 months he got those adults vaccinated who were willing, and began the process whereby getting Covid for most of people was no longer life threatening. As for the die hard Trumpist old people who refuse to get vaccinated, they are harming themselves and those around them.

Biden’s pandemic intervention is estimated to have saved a million lives.

Biden put America back to work, getting the unemployment rate down to levels not seen since the Woodstock Music Festival and the craze for paisley.

So much production had temporarily cut back during the pandemic that when consumers wanted to buy again, there were bottlenecks that caused inflation. These supply problems are easing, though prices of staples remain too high. In some instances, Vladimir Putin’s war on Ukraine caused spikes that won’t be easy to overcome, both in energy prices and in wheat prices. Still, gasoline prices have fallen steadily for two months now.

Biden charged the Department of the Interior to jumpstart the US offshore wind industry, with a goal of 30 gigawatts by 2030, by leasing federal waters offshore to private companies. We will see some new, enormous wind farms come on line in as little as four years, some of the biggest in the world.

Biden glad-handed and wheedled to get the bipartisan $1.2 trillion Infrastructure Investment and Jobs Act passed, which will among other things build out electric vehicle charging stations throughout the country and help schools buy electric buses, along with investments in bridges (10% of which seem to be on the verge of falling down) and other key infrastructure. It even has $65 billion in it to ease access for all Americans to the internet, which should increase productivity.

Biden got a new industrial policy with the $52 billion in the CHIPS Act for revving up a US-based semi-conductor industry, which is key to progress in fighting climate change, as well. He arranged funding for veterans suffering the after-effects of toxic burn pits in Iraq and Afghanistan.

Then this month he succeeded in encouraging Democrats in the Senate to pass the Inflation Reduction Act, which he will sign this week, with $369 billion for the green energy transition. It will also make seniors’ medicines cheaper and help the 40% of the country stricken by long-term drought owing to the climate emergency adopt resiliency measures.

Despite leftist criticisms of Biden, much of the big legislation he signed has a bias toward union labor, something we haven’t seen in recent decades.

This presidency does not look like Trump’s, or Obama’s, or Bush’s, or Clintons. It may not be Lyndon Johnson’s Great Society, but it is probably the closest we’ve come in the succeeding 56 years.

Biden may just keep the Senate this fall, what with the Republicans putting up goofballs like Mehmet Oz and Herschel Walker and Ron Johnson.

Trump’s cascade of legal problems may have temporarily given him a lift, but they will likely eventually cripple him as a national politician if they have not already.

And Democrats may benefit this fall from a strong backlash among their voters and even many suburban Republican women against the misogynist Supreme Court and male politicians’ interference in women’s health care, with the anti-abortion decision and state laws. We got a glimpse of that in Kansas this summer.

Joe Biden should not be underestimated. He is powerfully reshaping the country, along with the rest of his party, and preparing us for the challenges of the twenty-first century. Write him off at your peril.