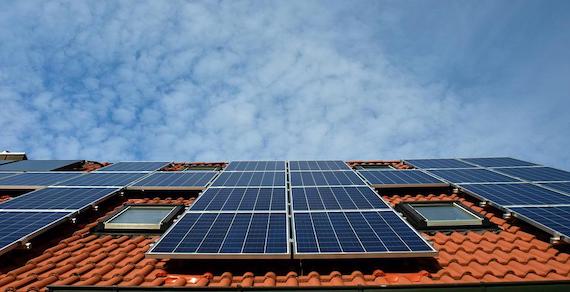 Ann Arbor (Informed Comment) – The Inflation Reduction Act (IRA) has established a 10-year 30% tax credit for installing solar panels on your roof.It is a worthwhile thing to do if someone is planning on being in their house for the long term. And it isn’t only the panels themselves that the IRA subsidizes through hefty tax rebates.

Toby Stranger at Consumer Reports lists the following expenses you can take a 30% tax credit on for household solar systems, according to the Department of Energy.

Solar panels last around 25 years. Before we had ours put on in 2013, we had our house re-roofed in hopes that the new tiles would last just about as long as the new panels. Our 16 solar panels cost $18,000 and produce over 4 megawatt hours of electricity a year. The sun hardly shines at all in December and January in Ann Arbor, so those two months are a loss. The panels, however, almost entirely cover our summer usage, and since our air conditioning is electric, that is what you would want.

You will hear lots of things, many of them wrong, about how long it takes to pay off the panels in savings on your electricity bill. The panel array we have would probably cost $12,000 – $14,000 today, since the cost of the panels has fallen significantly. With the passage of the IRA, you can take 30% off in tax credits, assuming you owe that much in taxes. On a $14,000 system, that would take the cost down to $9,800. But consider this: Zillow estimates that solar panels add 4% to the value of your home. On a $200,000 house, that is an $8000 increase in equity value.

The average home in the US this year, though, sold for, $348,000, and putting solar panels on its roof would be a $13,920 increase in equity. So between the tax credit and the equity increase, the panels can be almost free, depending on the kilowattage of the array you have installed. If the tax credit and increase in home value are figured in, you are probably getting savings on your electricity bill, if not immediately, then not so long after your purchase. Of course, the increase in equity only matters if you sell before the panels reach the end of their life, so not everyone will want to count on it.

Even without figuring the equity increase, in my part of the country the pay-off time for the $14,000 system would, after the tax credit, be a little over 7 years, which is not that much on a 25-year system. The payback period shortens, moreover, with any increases in the cost of fossil fuels. In Britain it is estimated that solar panels would now pay for themselves in only 4 years, because of the spike in fossil gas prices.

The payback period can be cut in half if you combine your solar panels with a home battery system like the Powerwall. And, as noted above, there is a tax credit on the purchase of those, as well.

Moreover, if you get an electric car, for which you can get a $7,500 tax credit under certain circumstances, and you charge the car from the solar panels with a fast charger during daylight hours or using a home battery system like the Powerwall, the pay-off of both the car and the panels in saved gasoline and electricity casts is shortened.

Some states offer additional incentives, on top of the federal ones.

Honestly, the way I look at it, if you are a homeowner and will be in your current house another decade, you are probably costing yourself money by not putting up solar panels.

Cost aside, you have the satisfaction of reducing your carbon dioxide output. Our panels have generated dozens of megawatt hours from sunlight, cutting our carbon production significantly, if still not enough. We don’t think we’ll stay in this house much longer or we’d put up some more panels and put in a heat pump, for which there is also a big tax credit now.