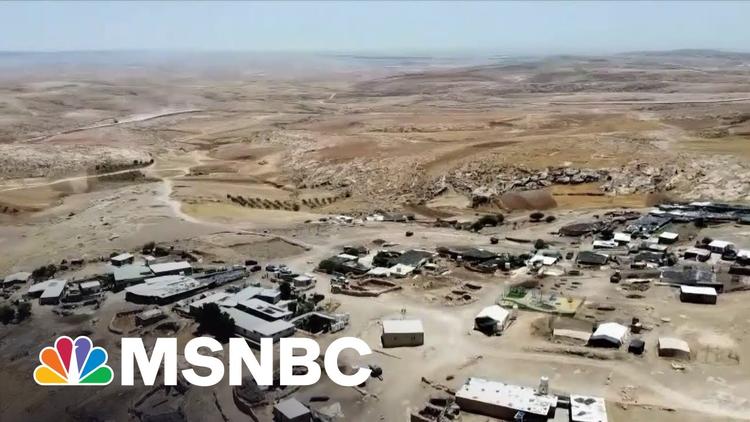 Ann Arbor (Informed Comment) – The Israeli usurpation of nine Palestinian hamlets of Misafer Yatta near Hebron has driven some of the residents to shelter in caves, after their domiciles were demolished by Israeli Occupation troops. So report Allyson Horn, Fouad AbuGosh and Haidarr Jones, writing at the Australian Broadcast Network. They quote one such refugee from militant Israeli expansionism, Emad Husheyah, as saying that he had to try to clear the caves of snakes, scorpions and rats, and now he is afraid of the unsupported roof falling on him and his nine children. Even so, one of his daughters was bitten by a scorpion.

The Israeli military has stolen Misafer Yatta’s lands for a firing range, and having done so, has declared that the 1,144 Palestinians whose families have made their homes there for decades may be relocated. Some Israeli demolition of homes and a school have already taken place or been scheduled. The residents had gained a reprieve in the late 1990s when they sued in Israeli courts to stop their eviction, but the Right-leaning Israeli Supreme Court found against them. Israeli squatters also have an eye on these Palestinian lands.

Most Palestinians in the West Bank come from families that had long pursued agriculture in what is now Israel or Jordan, living in hamlets. But some of the people of Misafer Yatta had been transhumants before Israel was established in 1948. Transhumants are not pure “nomads” but pastoralists who move between sites seasonally. Pastoralists raising sheep and goats in the arid Middle East make use of marginal land by seeking out pasturage whenever it pops up. Often the bottom of a hill will have some snow melt, which feeds the grass, in the spring. Other sites might have some fall rains. Transhumants go back and forth between two such sites, which have seasonal pasturage. Often they mix agriculture with pastoralism by sowing some seeds at their habitual sites as they are leaving, and harvesting them six months later on their return. Transhumants’ diet is heavily skewed toward meat, animal products and milk and yogurt, because they make use of the products of their livestock. They, however, need grain for certain vitamins and for dietary bulk. Either they have to barter for the grain from farming villages or they have to plant and harvest it themselves.

All this is to say that there is no such thing as a “pure nomad.” Various forms of pastoralism — raising sheep and goats and sometimes other animals — typically involve a territory that is regularly traversed between habitual camping grounds.

The Israeli authorities are doing to the Palestinians what 19th century whites did to American Indians, as with the Trail of Tears, where they were ethnically cleansed and expelled to the West. We think of Cherokee as a Western tribe now only because they were forced out of Georgia and the Carolinas. The difference is that whites in the US ethnically cleansed the American Indians before there was much in the way of international law, and before Hitler gave expelling minorities from their homes a bad name. Nowadays, behaving this way is a war crime and the individuals who commit it could be hauled up on charges at the International Criminal Court.

So this Israeli land theft is why Emad Husheyah and his nine children are living in a cave, and why one of his little girls was bitten by a scorpion.

The Palestinian Authority has allotted resources to clean and decorate and strengthen the ceiling of such caves.

The Geneva Convention of 1949 on the treatment of populations occupied during war forbids the occupying nation (in this case, Israel) from deporting them or altering their life ways significantly. The Geneva Conventions were passed in a bid to prevent the kind of ethnic cleansing the Nazis pursued in Occupied Poland. These provisions on the treatment of refugees were adopted into the Rome Statute, which is the charter for the International Criminal Court. The Palestinian Authority is a member of the ICC, which has begun an inquiry into human rights in the West Bank. The ethnic cleansing of Misafer Yatta will ultimately be an item on their docket.