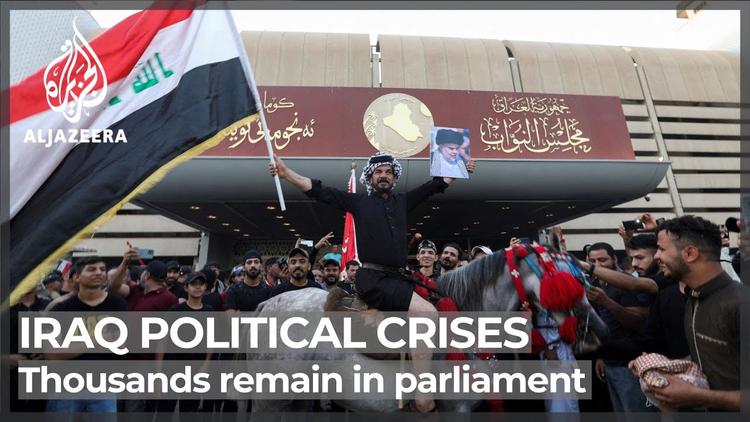 ( Middle East Monitor ) – Why does the occupation of the Iraqi Parliament building in the Green Zone in Baghdad, not arouse feelings of enthusiasm, as it did in the case of the protesters’ occupation of the presidential palace in Sri Lanka, enthusiasm towards which reached the Arab nations and gave some a level of optimism?

Is it because the occupiers of the building in Baghdad do not represent the people despite their claim that they are the oppressed people? Or is it sectarianism that, after achieving the success of attracting power in favour of Islamic parties and militias of one sect in the last twenty years and since the invasion of Iraq in 2003, and in the absence of a common, unifying enemy for it, has brought the termites and corruption to the land of “Ahl Al-Bayt, allowing it to gnaw at the “house” from the inside? What about the banner of reform raised by those who stormed the building, as they jumped on the chairs and inside the offices, filming themselves inside the health facilities, and talking about water and electricity being available to MPs, while the people are deprived of it?

Is this not the spirit of the oppressed people rising up against corruption, who have the right to take back ownership of the building and turn it into whatever they want, even if what they want is another additional arena for performing the rituals of mourning and hitting? Perhaps the lack of enthusiasm at the storming of a building that is a symbol of corruption, located in a fortified area that is a symbol of the occupation, is the people’s despair at the broken record, after it has been repeated several times by the head of the Sadrist movement, making it the embodiment of an egg from which no bird will emerge, as the late poet Muzaffar Al-Nawab says?

There are many reasons for not being optimistic about the storming of Parliament, not including the lack of belief in the necessity of change and the ability of nations to change and live decently in a country that can accommodate everyone. However, the storming of the Iraqi Parliament differs from the demonstrators storming the presidential palace in Sri Lanka, which occurred after mass protests and massive demonstrations, which lasted for a long time and spread throughout the country, demanding the resignation of the head of state and the prime minister, after the latter announced the collapse of the country’s economy completely, in the worst economic crisis since the country’s independence in 1948. In addition to this, the people are suffering from severe shortages of food, fuel and medicine. Although the Iraqis suffer from a lack of basic needs, which is a point of similarity with Sri Lanka, the reasons for storming Parliament differ in several ways, perhaps the most prominent of which are firstly, Iraq is one of the rich countries in the world, and its oil income has reached, at present, the highest percentage in its history. Secondly, the storming operation was limited to followers of Muqtada Al-Sadr, the leader of the Sadrist movement and the Shia militia, Saraya Al-Salam.

Thirdly, the storming came in protest against the nomination of a rival to the Sadrist movement, by another Shia bloc known as the Coordination Framework, for the position of prime minister based on previous manoeuvres that Al-Sadr wanted to demonstrate the populism of his leadership of the movement and the militia. Among the manoeuvres that occupied the country and disrupted people’s lives: ordering the withdrawal of Sadrist MPs, united Friday prayers, and announcing plots aimed at assassinating Al-Sadr after human rights activist, Ali Fadel, leaked tapes of former Prime Minister Nouri Al-Maliki exposing their incitement to violence, which have been reason for Al-Maliki to be brought to trial. Fourth, the leader of the Parliament stormers does not represent the people, not even the majority, but rather his role is often exaggerated when needed to provoke violence and chaos.

What increases the limitations of the Sadrist movement is the fluctuation of its leader’s behaviour from the far right to the far left, due to the severe psychological ups and downs that he has been suffering from since his childhood and is clearly evident in his speeches, language and behaviour. Fifth, the number of times that Al-Sadr supported the corrupt and war criminals, most notably his current enemy, Nouri Al-Maliki, exceeded the fingers of one hand and, what is even worse, is that it was one of the main reasons that played a decisive role in eliminating the October 2019 demonstrations because they truly represented the voice of the Iraqi people. The demonstrations had revived the hope of reclaiming the homeland until Al-Sadr and his followers realised that it would bring about real political change, threatening his populism, so he sent his followers and militias to disperse them.

Muqtada Al-Sadr is not unique in his compulsive behaviour and moods, which is strongly reflected in the political situation. The first example of this is US President Donald Trump, who, with his speeches and fabrications provoked the feelings of racism and false patriotism. So much so that the storming of the Iraqi Parliament is almost identical to the attack on the Capitol building in Washington and its occupation by Trump followers, who demanded the rejection of Joe Biden’s victory in the presidential elections. They stayed in the building for more than three hours before Trump, who was enjoying watching them on television, asked them to return to their homes. Similarly, Al-Sadr’s followers remained in Parliament, in the first storming, for three hours, until Muqtada’s order reached them, when he tweeted, “Your message has arrived. Beloved, you have terrified the corrupt, pray two rak’ahs and return to your homes safely.”

At the same time, Nouri Al-Maliki, Sadr’s strongest rival in occupying ministerial and institutional positions from the “Shia home”, leaked pictures of him carrying a weapon among a group of his guards inside the Green Zone. The message intended from the leaked images was clear. It expresses Al-Maliki’s seriousness in implementing what he once declared: that he would not give power to anyone else, although his message at that time was directed as a threat to those who dared oppose him from the Sunnis and not the Shias, as is happening now. This proves that the cocktail of clinging to power and corruption is stronger than sectarian loyalty. Al-Sadr realised that the first storming did not have the desired effect, but rather benefited his rivals, so the second storming was supported, this time, by the presence of the commander of the Saraya Al-Salam militia to display the force of arms, with the blessing of Al-Sadr. A picture was published showing Al-Sadr reading the Qur’an and addressing the invaders “I pray to God, beloved, for your safety, security and success”, so that he and his followers continue to appear honest, pious, religious and patriotic, although they have and still control the most corrupt and terrorist state administrations and institutions. Their current sit-in is just a continuation of a black comedy, for which Iraq is paying the price dearly under changing names according to the marketing agency.

–
Haifa Zangana is an Iraqi author and activist. She was an advisor for the UNDP Report Towards the Rise of Women in the Arab World (2005) and as a consultant for ESCWA (United Nations Economic and Social Commission for Western Asia) she contributed to “Arab Integration” report and “Towards Justice in the Arab world” report which was withdrawn by UN general secretary. Her writings published regularly by Arab & western media and she is a weekly columnist for Al Quds Al Arabi. She currently works with former women political prisoners in Tunisia to write their own experiences as part of transitional justice process.