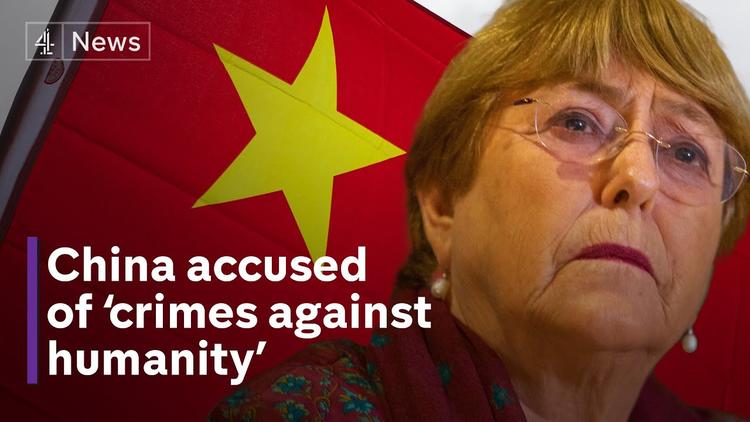 Human Rights Watch – (Geneva) – A groundbreaking United Nations report published on August 31, 2022, says the Chinese government has committed abuses that may amount to crimes against humanity targeting Uyghurs and other Turkic communities in the Xinjiang region, Human Rights Watch said today. The report by the outgoing UN High Commissioner for Human Rights, Michelle Bachelet, contains victim accounts that substantiate mass arbitrary detention, torture, cultural persecution, forced labor, and other serious human rights violations, and recommends that states, businesses, and the international community take action with a view to ending the abuses, and advancing justice and accountability.

“The UN human rights chief for the first time lays bare the Chinese government’s grave abuses and concludes they may amount to crimes against humanity,” said John Fisher, Global Advocacy Deputy Director at Human Rights Watch. “Victims and their families whom the Chinese government has long vilified have at long last seen their persecution recognized, and can now look to the UN and its member states for action to hold those responsible accountable.”

The high commissioner’s report challenges the Chinese government’s blatant disregard for its international human rights obligations, Human Rights Watch said. It calls on businesses to meet their responsibilities to respect human rights, and for follow-up by UN member countries and bodies, which could take the form of an investigation to interview victims and survivors, identify those responsible, gather evidence, and recommend strategies for accountability. Similar recent UN Human Rights Council mechanisms have included commissions of inquiry, fact-finding missions, and independent international monitoring missions. This could also lead to the identification of all those missing and forcibly disappeared so that they can be reunited with their families.

The report should be formally presented to the Human Rights Council as a matter of priority, Human Rights Watch said, so that states can discuss the report’s findings and take the steps needed to implement its recommendations.

In the report, the high commissioner details widespread abuses, including targeting of cultural and religious practices, family separation, arbitrary arrests and detention, rape, torture, and enforced disappearances, across Xinjiang. The report concludes that “[t]he extent of arbitrary and discriminatory detention of members of Uyghur and other predominantly Muslim groups, pursuant to law and policy, in context of restrictions and deprivation more generally of fundamental rights enjoyed individually and collectively, may constitute international crimes, in particular crimes against humanity.”

Detainees interviewed for the report described conditions in so-called “vocational training centres” that would amount to torture or other forms of ill-treatment, including “being beaten with batons, including electric batons while strapped in a so-called “tiger chair”; being subjected to interrogation with water being poured in their faces; prolonged solitary confinement; and being forced to sit motionless on small stools for prolonged periods of time.”

The report noted that Chinese authorities continue to openly criticize victims and their relatives now living abroad for speaking about their experiences in Xinjiang, engaging in acts of intimidation, threats, and reprisals. In the words of one interviewee: “We had to sign a document to remain silent about the camp. Otherwise, we would be kept for longer and there would be punishment for the whole family.”

The report also draws on analyses of Chinese laws, regulations, and policies. The findings are consistent with those of academics, journalists, and human rights organizations, published since 2017 documenting grave international crimes. In the past five years, Human Rights Watch has documented mass arbitrary detention, pervasive surveillance, and crimes against humanity across the region.

In May, Bachelet visited China, despite being unable to travel or engage with interlocutors freely, and had little direct engagement with affected communities. In an end-of-mission statement delivered on May 28, Bachelet underlined that the visit was not an investigation, which she noted would require “detailed, methodical, discreet work of an investigative nature.” The new report lays a solid foundation for further UN and Human Rights Council action towards accountability in China.

“Never has it been so important for the UN system to stand up to Beijing, and to stand with victims,” Fisher said. “Governments should waste no time establishing an independent investigation and taking all measures necessary to advance accountability and provide Uyghurs and others the justice they are entitled.”