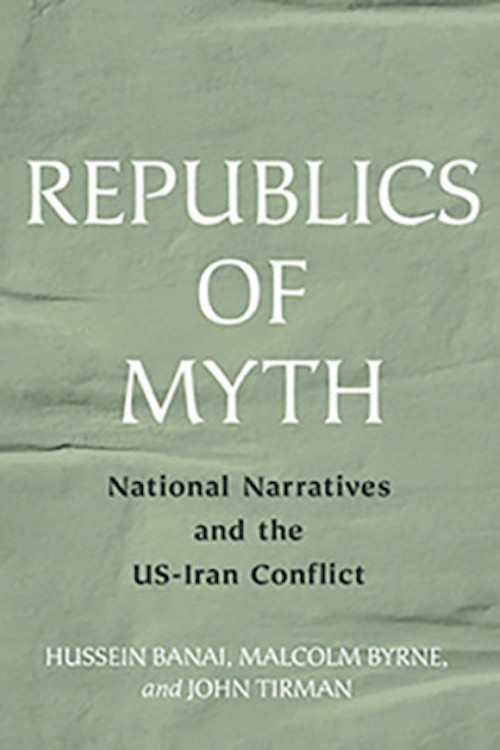 The enmity between the United States and Iran following the 1978-79 Iranian Revolution constitutes one of the most studied international rivalries. This notwithstanding, the recently published book Republics of Myth: National Narratives and the US-Iran Conflict presents original insights that will enrich a four-decade-old conversation that shows no signs of abating.

The core thesis of Republics of Myth is that both US and Iranian self-conceptions about their national identity have decisively fueled the rivalry between Washington and Tehran. These self-conceptions have contributed to the continuation of tensions despite the existence of sometimes-convergent national interests.

The authors of the book, Hussein Banai, Malcolm Byrne, and John Tirman, see Iran’s national narrative as stemming from two main foundational myths: Persian history stretching back to Cyrus the Great (r. 559–530 BC) and the “Karbala Paradigm”, which revolves around the death of Imam Hussein at the hands of the Umayyads in 680 AD.

Both the secular and the Shiite roots of the Iranian national narrative converge in a deep rejection of foreign influence, the privileging of action over passivity in front of injustice and a certain Manichean approach to world events. Meanwhile, the US narrative is based on the notion of American exceptionalism, according to which the United States “shall be as a city upon a Hill”, an illuminating example of virtue for mankind. This exceptionalism is intertwined with the “Frontier Myth”, which mandates America’s expansion and the civilization or extermination of the native.

As the authors remark, “the clashing qualities of the narratives enlarge the possibility of each side misunderstanding the other.”[1] This is why interactions between Iran and the United States have frequently fallen into what Banai, Byrne and Tirman aptly call “the narrative trap.” The national narratives too often operate as catalysts of conflict, entrapping both sides in the demonization of ‘the Other’. In the eyes of US leaders, Iran appears as “lying, cheating, dangerous, armed, irrational, and seething with anger and revenge.”[2]

Meanwhile, for the Iranian leadership, the United States is “a permanent enemy to be reviled”[3], the “Great Satan” in Ayatollah Khomeini’s worldview. The anti-Americanism of the Islamic Republic has deep roots. In fact, the 1978/1979 Iranian revolution had a dual nature: it was an uprising against both ‘American imperialism’ and the despotic rule of Shah Mohammad Reza Pahlavi, which were seen as complementary oppressions due to the prevailing Iran-US alliance under the Shah.[4]

Republics of Myth presents a comprehensive account of the ebbs and flows of the Iran-US rivalry in the last four decades. Using the clash of narratives as the common thread, the book moves from the 1979 US embassy takeover by Iranian revolutionaries to the inauguration of Joseph Biden as the 46th US President and the possibility of a return to the Iran nuclear deal signed in 2015, formally known as the Joint Comprehensive Plan of Action (JCPOA).

The story of Iran-US tensions is replete with missed opportunities for reconciliation. The 1996 bombing of the Khobar Towers in Saudi Arabia, carried out by a group with links to Tehran, resulted in the death of 19 US soldiers. It also closed the doors to a rethinking of the ‘dual containment’ policy promoted by the Clinton administration to counter Iran and Iraq.

Similarly, the inclusion of Iran alongside Iraq and North Korea in the ‘Axis of Evil’ described by George W. Bush in his 2002 State of the Union Address thwarted the possibilities of a rapprochement between Washington and Tehran. During the last months of 2001, the reformist administration of President Mohammad Khatami had collaborated with the US in discussions over the future of Afghanistan after the fall of the Taliban. As Arash Azizi puts it, “geopolitical realities had put Tehran and Washington on the same side. It was the United States that broke the pact.”[5]

That so many opportunities were squandered should not come as a surprise, however. As the authors explain, “in the absence of ordinary diplomacy, the national narratives actually gain more relevance and power.”[6] Banai, Byrne and Tirman argue convincingly that not even the JCPOA — undoubtedly the most significant diplomatic interaction between Iran and the United States — did significantly affect the narratives that have dominated Iran-US interactions since 1979. There is perhaps no clearer proof of that than one of the key sentences in Barack Obama’s speech after the signing of the JCPOA: “This deal is not built on trust; it is built on verification.”

One of the major strengths of Republics of Myth is its focus on why the emergence of shared national interests — such as the common will to stabilize Afghanistan after the 2001 US invasion — has never been sufficient for a significant rapprochement between Iran and the United States. National interests, write the authors, are “significantly the outgrowth of narratives, seeded and nourished by the durable myths, legends, and habits of mind that narratives and the broader political culture provide.”[7]

The authors’ conclusions emphasize the need to work toward building a common narrative of the Iran-US rivalry if relations between both countries are to be advanced beyond a limited agreement such as the JCPOA. Republics of Myth shows why this is badly needed but, at the same time, a significantly complex endeavor.

Given this complexity, it is surprising that the authors devote little attention to how a common narrative can come to fruition. Some of the recommendations remain very general. This is the case, for instance, when it comes to the authors’ call for the creation of an open-ended truth and reconciliation commission “populated by former policy makers, a range of experts, some current legislators, and so on.”[8]

Truth and reconciliation commissions have traditionally been set up to deal with the aftermath of civil wars — such as the case of the Solomon Islands — or long-time discrimination against national groups, with South Africa and Canada being two prominent examples. It is by no means clear how an international truth and reconciliation commission between Iran and the United States would operate, as the authors do not delve into any detail.

Republics of Myth is better at identifying the drivers of the Iran-US rivalry than at proposing ways to move beyond them. However, the book’s careful examination of how national self-conceptions and narratives feed the conflict is a highly original and significant contribution that makes Republics of Myth a relevant work. With this book, Banai, Byrne and Tirman provide the reader with a new lens through which the past four decades of Iran-US tensions and the current negotiations to revive the JCPOA can be better understood.