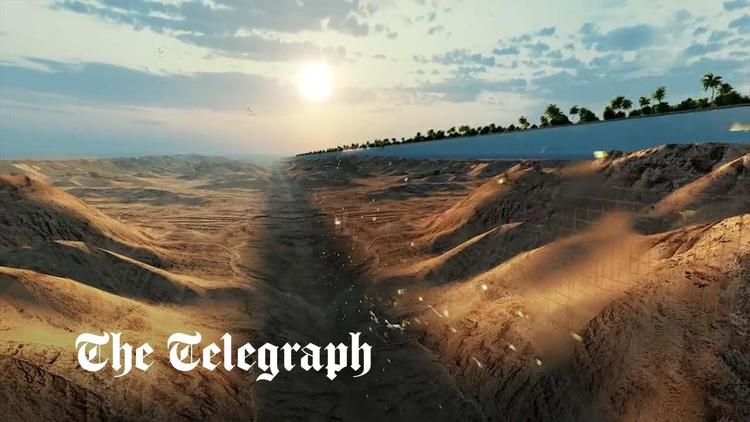 ( Middle East Monitor) – Saudi Arabia’s The Line has been lauded as the world’s most futuristic city plan, and for good reason. The vertical, walled smart city will run entirely on renewable energy and aims to revolutionise urban planning, putting humans first.

Catering for some nine million residents, the mirrored twin-skyscraper city will stretch over 106 miles across the north-west of the kingdom and will be situated within the prospective NEOM city, part of Crown Prince Mohammed Bin Salman’s ambitious Vision2030 project. Funded in part by the Public Investment Fund (PFI), the country’s sovereign wealth fund, The Line is expected to be completed by 2025.

“At The Line’s launch last year, we committed to a civilisational revolution that puts humans first based on a radical change in urban planning,” said Bin Salman in July. However, rather than the utopian image being projected and promoted by Riyadh, The Line has been described by critics as dystopian and resembling something out of a sci-fi movie.

Much has already been written about the controversy surrounding the city functioning as a state surveillance hub, especially as Artificial Intelligence (AI) will form the backbone of its infrastructure, replete with “countless sensors, cameras and facial recognition technology”.

Yet this cyberpunk megaproject is also potentially unsettling for another interesting, albeit overlooked reason: the occult dimension concerning the Islamic belief in jinns in the ultra-conservative country.

To this day in the holy city of Makkah there exists the Mosque of the Jinn, one of the oldest in the city, where according to narrations, a group of jinns pledged allegiance to Prophet Muhammad (peace be upon him) after hearing him recite from the Qur’an. There is also an area known locally as Wadi Al-Jinn, some 30 kilometres north-west of Madinah, a mysterious valley famed for peculiar occurrences of vehicles apparently moving without the driver behind the wheel, although scientific probes have deduced that the cause of such optical illusions are the high magnetic fields in the area.

Article continues after bonus IC video
The Telegraph: “Saudi Arabia’s Neom city design shows what life would be like living in ‘The Line’”

The belief in the existence of jinns is indisputable for most of the world’s estimated 1.8 billion Muslims, including the minority “Qur’anists” who rely solely on the Holy Qur’an as a source of authority in Islam. This is because these created beings are mentioned several times in the Divine scripture.

They are also mentioned in the narrations of the Prophet. Jinns are beings unseen to the human eye made of “smokeless fire” whose world exists in parallel to our own; the name derives from the Arabic root j-n-n denoting that which is hidden or concealed. Like humans, they can be among the believers and non-believers and are capable of performing both good and bad deeds.

Recorded in pre-Islamic literature in the region, jinns have captivated and continue to captivate popular imagination, be it in folklore and cultural “jinn stories” that continue to permeate much of the Islamic world from Morocco to Indonesia, or even in the west, not only among the Muslim diaspora but also in contemporary arts and literature.

The abode of the jinns is particularly fascinating as they are mostly thought to live in highly remote areas, including the desert. According to Professor Ali A Olomi, a historian and scholar of the Middle East and Islam at Penn State University in Abington, some jinns choose to live among humans while others live in a hidden realm alongside ours.

One legendary jinn is said to have a “massive carnelian and gold palace”. We can find similar mention of this in western creative writing, in the Oz books for example, with a recurring character,

Olomi has also pointed out that in folklore jinns are also known to be builders, credited with constructing many cities and monuments of the ancient world. This is perhaps influenced by the Qur’anic mention of Prophet Sulaiman (peace be upon him) ordering jinns to build a grand palace with a floor made of glass. In present-day Oman, there even exists a fortress and city named Bahla, believed by locals to have once been a jinn city.

Jinns featuring in Saudi news stories was not uncommon or unheard of prior to June 2017 when Bin Salman became the de-facto ruler and started to implement his reformist and modernising project. Earlier that year, though, Al-Arabiya did a small feature on the village of Laynah in northern Saudi Arabia which is “famous for its miraculous water wells that go back to the reign of Prophet Suleiman. The legend has it that the wells once reached 300 in number, and that they were carved in the solid rocky soil in Laynah by King Suleiman’s army of jinns to provide water for the king’s army.”

However, the hidden beings did make a slight comeback in the news back in 2019 when it was reported that the Saudi authorities had started to promote and develop pre-Islamic sites amid efforts to boost the kingdom’s tourism industry. It was all part of the effort to diversify the economy away from oil revenues.

Al-Ula in northern Saudi Arabia is some 300 kilometres from NEOM, with its notable landmark being the rock-hewn tombs of Madain Saleh, which is hoped will attract millions of tourists. The development was met with disapproval from some members of the clerical establishment, who have traditionally discouraged Muslims from visiting such sites as they are deemed to be the ruins of cursed past nations, or haunted by jinns. At the time, Al-Monitor observed that beliefs about jinns being present at desolate archaeological sites are prevalent across the Middle East, but do “not usually take on as sinister a tone as it has in Saudi Arabia.”

For the Saudis, Al-Ula and NEOM represent the old and the new; the ancient and the modern: “Both cities are centre pieces of the crown prince’s determination to grow and diversify the nation’s economy away from reliance on fossil fuels, and living examples of how the great strategic plan is focused not only on building the nation’s future, but also on safeguarding its past.”

As a fundamental belief, jinn will continue to feature in Saudi society and culture, even if the country is becoming more secular as it undergoes rapid social transformations and modernisation. In the case of The Line, and unlike the Valley of the Jinn, driverless cars will be explained through the existence of AI rather than supernatural occurrences, and the “glass palace” will most likely be constructed by cheap, foreign, underpaid labourers, rather than invisible beings. The project’s success is still far from certain, though, and it is already beset with several challenges. Nevertheless, it will be interesting to see what future narratives may emerge from the envisioned shiny structure in the far northern corner of the Arabian Desert.