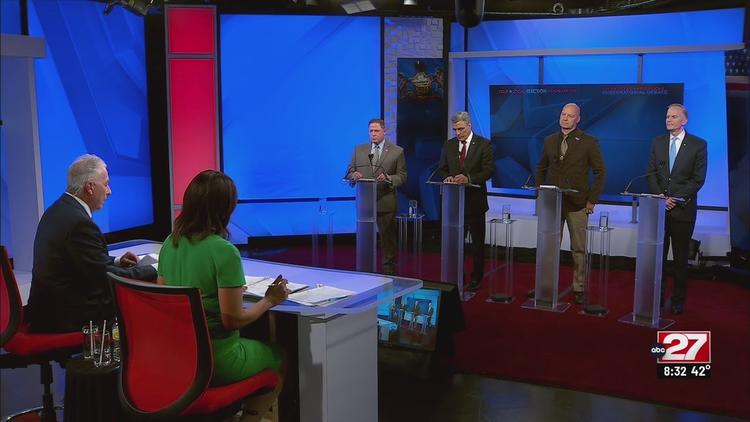 Chicago (Special to Informed Comment) – Fury at the MAGA majority on the Supreme Court and disgust at the lunatic extremism of MAGA candidates have helped make abortion the central issue of the 2022 midterms and have improved the odds of defeating the fascist Trumpists. The economy is improving and gas prices are dropping, even as Democrats finally got it together to pass significant gun safety laws, healthcare reforms, and climate change initiatives. At the same time, GOP whining and lying about crime, immigration, and Critical Race Theory have become boring, irrelevant, propagandistic nonsense. While Democrats are fighting the war against inflation and authoritarianism, Republicans have declared war on women.

“The conversation in the nation has changed,” said Michael Podhorzer, former chief political adviser to the AFL-CIO and chair of the Analyst Institute, a collaborative of progressive groups that conducts extensive public polling. “In 2021, the conversation was about what Democrats were or were not doing — inflation, Afghanistan, crime — the classic context for a party-in-power rout. Since June, the conversation has shifted to what returning Republicans to power would mean.” That shift in the conversation, he argues, is “reminding the 81 million people who voted against Trump in 2020” about why they turned out to oppose him and increasing the odds that more of them will show up again in 2022. The towering red tsunami, predicted by the media, now looks like a polluted puddle circling the sewer drain.

That conversational change occurred when five MAGA collaborators in black robes — three of them benefactors of a disgraced president not elected by a majority — voted to overturn Roe, undermining a fundamental right that for decades had been the fabric of people’s lives. The decision created a Class 9 magnitude earthquake that tectonically shifted the political landscape. It turns out that American women don’t like being told that they don’t have a right to make decisions about their own bodies. The backlash became clear when, in conservative Kansas, voters decisively rejected a constitutional amendment that would have nullified a state supreme court decision guaranteeing the right to an abortion.

Embed from Getty Images
Demonstrators with signs of U.S. Supreme Court Justices during an abortion-rights protest in New York, U.S., on Tuesday, May 3, 2022. Abortion rights suddenly emerged as an issue that could reshape the battle between Democrats and Republicans for control of Congress, following a report that conservatives on the U.S. Supreme Court were poised to strike down the half-century-old Roe v. Wade precedent. Photographer: Stephanie Keith/Bloomberg via Getty Images.

Learning to embrace their inner culture warrior, Democrats are going hard at Republicans on the forced birth issue, stressing that reproductive rights will be on the ballot. Supporting abortion bans with no exception for rape or incest demonstrate how extreme MAGA Republicans have become. The GOP candidate for Illinois Governor — religious zealot Darren Bailey — said that the Holocaust “doesn’t even compare” to abortion, which he called “one of the greatest atrocities of our day.” In Pennsylvania, Doug Mastriano — the far-right Trumpist nominee for governor — said in a debate: “I don’t give a way for any exceptions.”

Trump puppet Pennsylvania Senate candidate Dr. Mehmet Oz declared that abortion at any stage of pregnancy is “still murder” because “I do believe life starts at conception, and I’ve said that multiple times.” Oz further argued that incest isn’t a problem “if you’re more than a first cousin away.” A true believer when it comes to the oppression of women, incumbent MAGA Senator Ron Johnson — who is anti-abortion without exception — told the women of Wisconsin to move if they didn’t like the total abortion ban. Even Republicans who express support for limited abortion rights are getting hit, as Democrats successfully paint the entire GOP as a threat to women’s bodily autonomy — which it is.

Embed from Getty Images
Mehmet Oz, who is running for the US Senate, speaks as former US President Donald Trump stands behind him during a campaign rally in support of Oz and Doug Mastriano for Governor of Pennsylvania at Mohegan Sun Arena in Wilkes-Barre, Pennsylvania on September 3, 2022. (Photo by Ed JONES / AFP) (Photo by ED JONES/AFP via Getty Images).

Some extremist Republicans have been forced on the defensive, scurrying around, trying to avoid getting swallowed by the backlash over Roe. Several nefarious MAGA candidates scrubbed hardline, anti-abortion language from their campaign websites. For example, Arizona Senate candidate Blake Masters — a darling of MAGAverse — removed language that said he was “100% pro-life,” he supported a “federal personhood law” that grants rights to fertilized eggs, and he backed the nationwide criminalization of abortion.

A truly loathsome politician, Masters called the Supreme Court nominee Ketanji Brown Jackson a “pedophile apologist,” insisted that Democrats celebrate looters, arsonists, and pedophiles as heroes, while turning brave people like Kyle Rittenhouse into villains, and called for the dismantling of American democratic institutions, which he described as a “dystopian hell-world.” Like other Republicans trying to conceal their radicalism, Masters can’t hide his MAGA toxicity.

Democrats will be positioned to preserve reproductive freedom by enshrining it into federal law if they can upset historical midterm trends and overcome the GOP’s partisan gerrymandering and plans to subvert voting. Correcting the rogue Supreme Court’s abortion ruling requires them to not only keep their majority, but to expand it — a challenging prospect in an off-year election.

“Women are registering to vote in numbers I never witnessed before,” said Tom Bonier, CEO of TargetSmart a data and polling firm. “I’ve run out of superlatives to describe how different this moment is. This is a moment to throw old political assumptions out the window and to consider that Democrats could buck historic trends this cycle.”

Aside from abortion, the most politically potent anti-GOP issue is the former president’s stranglehold on the throat of the GOP. Democrats’ effort to make the election about Trump, rather than inflation or border security, has received a strong assist from the Con Man since he was dragged kicking and screaming from the White House after attempting a coup and inciting a treasonous paroxysm of violence that swallowed the Capitol.

His theft of classified documents has dominated headlines; his worse-than-Nixon corruption is detailed in a book Holding the Line — published Tuesday — by fired US attorney Geoffrey Berman that prompted a new Senate investigation; and, the repellent Clown Master continues to lead circus rallies for his crowd of racists, sociopaths, and celebrity worshippers who — against all self-respect and common sense — blindly adore this detestable anti-American. All of this provides a non-stop reminder of Trump’s malignant impact, of his danger to democracy, and of the need to stop him and his Republican Cult.

Bowing to the feral horde, also known as the Republican base, GOP leaders rushed to defend the brazen traitor after the FBI executed the search warrant on his Florida club. Florida Senator and spineless groveler Marco Rubio set the pace for abject devotion when he tweeted the day of the search: “Using government power to persecute political opponents is something we have seen many times from 3rd world Marxist dictatorships. But never before in America.” Rubio and Republican toadies have hitched themselves to the crime boss demagogue and will ride him to the bitter end. “We’re just waiting for him to die,” said a former Republican congressman, quoted in Mark Leibovich”s book Thank You for Your Servitude.

Threatening democracy, MAGA voters elevated legions of Trump-endorsed election-deniers. A recent CNN tally found that at least 20 GOP nominees out of this year’s 36 gubernatorial races — including Wisconsin, Kansas, and Maryland — have questioned or outright dismissed the 2020 election results. In Michigan and Nevada, the Republican party’s nominees for secretary of state — people who will oversee the 2024 election — have completely disappeared down the Stop-the-Steal rabbit hole.

Yet, for overall Mar-A-Lago madness, it is tough to beat Arizona, where GOP voters went all in on reality-challenged MAGA psychos. Election-deniers rode Trump’s Hellship to a clean sweep of all the top GOP nominations in Arizona, including governor, attorney general, secretary of state and US senator. These lunatics argue not only that loser Trump won the election in 2020, but also that the state’s results should be decertified.

In the midst of this anti-democratic menace, Democratic intensity and confidence is on the rise. President Biden’s job approval ratings have ticked up. Democrats over-performed in multiple special elections, including one in deep red Alaska where Native Alaskan Mary Peltola — abortion rights supporter and environmental activist — defeated the abominable, proto-Trumpist Sarah Palin.

Democrats have made steady gains on the generic congressional ballot and now have a slight advantage, according to FiveThirtyEight’s tracker. Political handicappers, like the Cook Political Report, have tweaked their predictions in Democrats’ direction. On Tuesday, Trumpist Senator Lindsey Graham introduced a nation-wide ban on abortions that would eliminate abortion access everywhere and reminded voters of the extremism that will come if Republicans take back the Senate and House. Further, the Biden-supported Ukrainian offensive against MAGA hero Vladimir Putin demonstrates that, with dogged persistence, the seemingly impossible is possible.

The vengefulness, veniality, and sheer lunacy of so many Ultra MAGA House members terrifies all rational people. Democrats must make clear that electing more vile Trump-lackeys like Marjorie Taylor Green, Gym Jordan, Matt Gaetz, and Lauren Boebert will increase the House ranks of white nationalists who will spout boundless stupidity and cause non-stop chaos.

If they win a majority, this MAGA Goon Squad will abuse the House’s power to launch probes of the Justice Department and the FBI for investigating Trump. They will impeach Biden. They could use the House’s fiscal powers to defund or hobble any prosecutions of Trump’s criminality. They are even capable of shutting down the government and defaulting on the debt-ceiling, which would send the global economy into turmoil.

Biden recently described MAGA Republicans as representing an extremism that threatens the foundations of the American republic. He also likened the MAGA ideology to “semi-fascism.” This rhetoric re-framed the 2022 election as a high-stakes contest between democracy and a return to Trumpism. He made clear that if you want to beat Trump in 2024, you need to beat him in 2022. With Trumpism, democracy, and abortion on the ballot, rational humans should be enthused about voting and even optimistic about winning because losing is unthinkable.