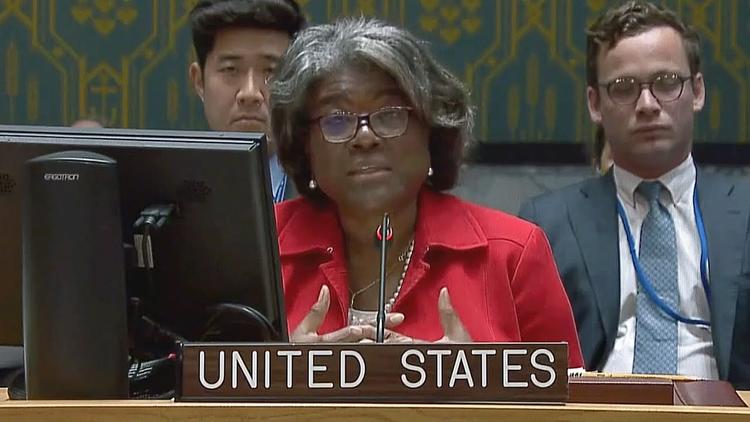 Ann Arbor (Informed Comment) – On Wednesday, US Ambassador to the United Nations Linda Thomas-Greenfield castigated Russia for having deported large numbers of Ukrainians from the parts of Ukraine that the Russian military had occupied, referring to these as “filtration operations.”

“Of course, I need not remind this Council that the forcible transfer or deportation of protected persons from occupied territories, to the territory of the occupier, is a grave breach of the Fourth Geneva Convention on the protection of civilians, and constitutes a war crime.”

She asked, “So why are they doing this?” and answered her own question: “The reason is simple: to prepare for an attempted annexation.”

Actually, what Article 49 of the Fourth Geneva Convention of 1949 says is “Individual or mass forcible transfers, as well as deportations of protected persons from occupied territory to the territory of the Occupying Power or to that of any other country, occupied or not, are prohibited, regardless of their motive.”

It isn’t just wrong to kidnap people from their homeland and take them to the lands of the Occupying power. It is illegal to move people out of an Occupied territory to any other place.

Thomas-Greenfield is right that what Russia is doing is horrible, and is a war crime. What she refuses to say is that Israel is guilty of precisely the same war crime.

East Jerusalem is part of the Occupied Palestinian West Bank. It has been illegally annexed by Israel and its hundreds of thousands of Palestinian residents have no real right to live in their own homes. In a report for the Office of of the UN High Commissioner on Human Rights in 2017, the Badil organization for refugee care reported that “Since the commencement of Israel’s occupation of Jerusalem, the residence rights of more than 14,500 Palestinians have been revoked, with more than half of these revocations having occurred in the… years between 2006 and 2015.”

That’s what Ms. Thomas-Greenfield calls a “filtration campaign” when Russia does it.

Then there is Hebron. The OHCHR report says, “Under the terms of the 1997 Hebron Protocol, Hebron was divided into two administrative areas: ‘H1’, and ‘H2’. The former, inhabited at the time by roughly 140,000 Palestinians, was assigned to the control of Palestinian Authority (PA), while control of H2, in which 30,000 Palestinians and the aforementioned Israeli colonies were located, was to be controlled by the Israeli occupying forces.3 Inside and adjacent to H2, Israel subsequently implemented a range of severe restrictive and discriminatory policies, creating a uniquely coercive environment for Palestinian residents of Hebron. This environment has resulted in significant
forced displacement.”

Human Rights Watch notes that in 1967 and after, when it seized the Palestinian West Bank and Gaza by main force, Israel engaged in “the denial of residency rights to hundreds of thousands of Palestinians and their relatives, largely for being abroad when the occupation began in 1967, or for long periods during the first few decades of the occupation.”

The report specified, “Israeli authorities refused to register at least 270,000 Palestinians who were outside the West Bank and Gaza when the occupation began in 1967 and revoked the residency of nearly 250,000, mostly for being abroad for too long between 1967 and 1994.”

Being temporarily abroad is not a legitimate grounds for denying the people of militarily occupied territory residency rights.

Indeed, Article 49 specifies that where the Occupying power temporarily evacuates civilians from Occupied territory for military reasons, “Persons thus evacuated shall be transferred back to their homes as soon as hostilities in the area in question have ceased.” They have to put them back. Israel has permanently exiled “hundreds of thousands of Palestinians” from the territory it is occupying. That is a war crime, as Ms. Thomas-Greenfield- points out for the Russian case.

There is solid historical evidence that moving the Palestinians out of Occupied Palestine has been an explicit Israeli policy and not just a set of random ad hoc measures.

The 2017 OHCHR report says, however, that it is not necessary to find that the Occupying power has an explicit plan of expulsion. Rather, “it is sufficient to demonstrate that transfer was at least a possible consequence of the act or policy in question. Israeli acts and policies which include residency revocation, denial of access to basic services, home demolitions and the active targeting of civilians and civilian objects make it clear that forcible transfer was not only possible but likely. In fact, in many of these instances forcible transfer was explicitly intended. Each case study, therefore, represents a prima facie grave breach of international law and confers a number of legal obligations.”

Ms. Thomas-Greenfield is especially outraged at the Russian plan permanently to annex the parts of Ukraine it has militarily occupied. But Israel permanently annexed Palestinian East Jerusalem and adjacent territories. Only a couple of years ago, then prime minister Binjamin Netanyahu was pushing a plan to annex more of the Palestinian West Bank.

Article 49 of the Fourth Geneva Convention also says, “The Occupying Power shall not deport or transfer parts of its own civilian population into the territory it occupies.”

The US case against Russia has signally failed to convince the Global South. In some instances, those countries have strong economic ties with Russia that they are loath to lose. But in many instances, it is just that they have heard too much hypocritical verbiage from the US and suffered too much from forms of imperialism openly backed by the US, to pay much attention to howls of outrage from Washington.