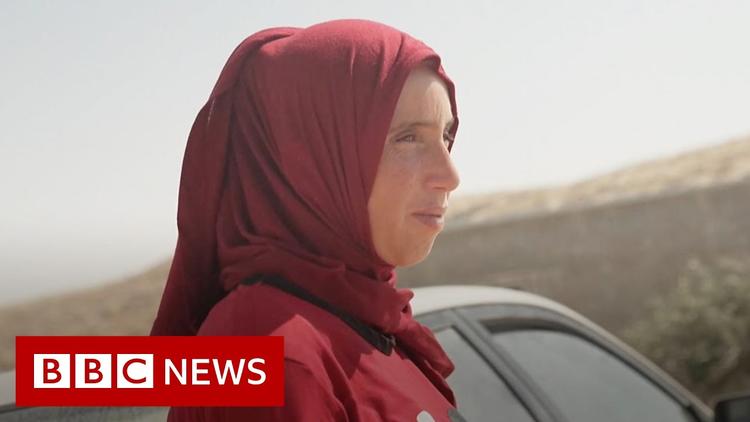 ( Waging Nonviolence) – Since a ruling of the Israeli Supreme Court on May 4, the Israeli military has been actively training in Masafer Yatta, in the middle of eight villages and hamlets where more than 1,100 Palestinians are living. More than half of the residents are children.

On a recent trip, I witnessed how Israeli military training is making life unlivable for Palestinians in Masafer Yatta. But they are more determined than ever to resist.

Masafer Yatta covers more than 210 square miles, an area about the size of the Gaza Strip. It is located 16 miles south of Hebron down to the 1949 Armistice Line and consists of a collection of 33 villages and hamlets that go back to 6,500 years, with around 3,000 Palestinians living there as shepherds and farmers.

The region has been under the risk of forcible expulsion since 1948. In the 1950s and 1960s, the Israeli occupation authorities bombed Masafer Yatta villages and expelled some of the resident families. In 1980, 12 villages had been declared a zone for Israeli military practice. Firing Zone 918, they call it.

During this period the Israeli authorities started building settlements at the edge of the firing zone and continued to demolish the houses and shelters of the residents. They were laying the groundwork for the forcible expulsion of the people to Yatta city.

In May 2022, the Supreme Court of Israel rejected the appeal by residents of eight villages of Masafer Yatta to overturn this designation of the area as a practice firing zone and let the Israeli occupation forces decide when they will expel the residents from their villages.

Troops established checkpoints to restrict the movement of the residents, aiming also to prevent other Palestinians, Israeli activists and internationals from coming to stand beside the people of Masafer Yatta.

At the beginning, the Israeli occupation army surveilled and counted the villagers. They followed the shepherds and farmers in the fields and prevented them from practicing their daily routines. Then they started live ammunition practice, three days a week. This disrupts the life of the villages and is especially frightening for children.

Last month I was there in the village of Al Majaz, one of the eight villages located in “Firing Zone 918.” The army arrived to locate the targets that they will start shooting at, which are essentially cartoons in the shape of human beings mounted on pillars. They put the targets at the entrance of the village, less than 100 feet from people’s homes.

I asked the soldiers why they are shooting here at the road of the village. When the commander arrives, he will not allow the soldiers to talk to me, so I take the opportunity to approach to the young soldiers —most of whom are 18 years old — when the commanders are not there because they usually have no idea what is going on. If someone needs to go to the hospital while you are shooting, I asked, how we will take them to the hospital? One solider told me, “You are right, that’s why we put the targets at the road of the village.” Then I asked, why they are conducting military training? He said, “We want to protect our state from the enemies.” Which enemies, he did not say. Iran? Gaza? Arabs?

It is a scary scene when you see the live ammunition everywhere and hear the sounds of shooting. And they do physical damage too. One house ceiling in Khaleit Al Dabi’ village was smashed by the army’s bullets during the training.

Israeli training is taking place three days every week. That means no movement three days a week. The occupation forces established checkpoints in strategic locations to prevent people from entering the areas. Shepherds are unable to go out and graze their livestock because the army will not allow them. They are scared that if they try they will put themselves and their sheep at risk.

The military training in Masafer Yatta is part of a systematic policy to forcibly expel the people. Most of the people’s work is outdoors, in the fields and with their sheep, and the military training is jailing the people in their homes. There are no other homes for these people, because the Israeli authorities are demolishing any construction.

According to the mayor of Masafer Yatta, more than 40 brick rooms, shelters, and tents were demolished since May 2022. The only safe space left for them is to live in caves as their ancestors did. There are now more than 200 families living in caves.

After more than 70 years, military training is the final step toward expelling the people. For the people, military training means no movement, no cultivation of the land, no grazing of their sheep, no life in the villages. They are only able to stay in their caves. The Israeli occupation authorities want people to sell their sheep, stop cultivating their land, and leave the area for Yatta, the closest urban area controlled by the Palestinian Authority.

But the military training in Masafer Yatta is also sparking backlash on the occupation authorities. Masafer Yatta residents have been resisting the forcible expulsion through different nonviolent tactics for decades. Now they are managing to gain media coverage and network with internal and external solidarity groups. International delegations have visited the area.

International solidarity and the Israeli activists play a crucial role in documenting, protecting and advocating for the people’s rights. The local struggle has also mobilized Palestinians from all over Palestine to come and support the residents of Masafer Yatta. The new generation of Masafer Yatta is more committed to stay there with their parents and families than any time before. The determination of the new generation to stay is cumulative, fostered by years of resistance, the resilience of the Palestinian people and their belonging to their families and the land.

Since the writing of this article, attacks by the Israeli military have continued in Masafer Yatta. including an assault on the author’s friend and activist, Hafez Hureini, on Sept. 12. Details of this incident can be found here.

This story was produced by Resistance Studies

Mahmoud Soliman is a Palestinian nonviolent activist and academic. He has over 15 years of experience organizing nonviolent campaigns, and is a founding member of the Popular Struggle Coordination Committee. Mahmoud is an affiliate faculty member with UMass Amherst Sociology department. His PhD focused on mobilization of Palestinian society towards nonviolent resistance from 2004-2014.