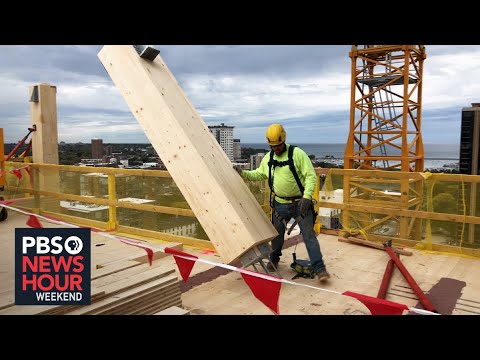 ( Clean Energy Wire ) – A large-scale transition to using wood for building construction in “timber cities” could avoid more than 100 billion tonnes of greenhouse gas emissions by the end of the century, about 10 percent of the remaining carbon budget for the 2°C climate target, according to a new study by the Potsdam Institute for Climate Impact Research (PIK).

“Production of engineered wood releases much less CO2 than production of steel and cement,” said PIK scientist Abhijeet Mishra, lead author of the study published in Nature Communications. Engineered wood also stores carbon, making wooden cities a unique long-term carbon sink. “We can house the new urban population in mid-rise buildings – that is four to 12 stories – made out of wood,” Mishra said.

Since trees take up CO2 from the atmosphere to grow, wood carries the lowest carbon footprint of any comparable building material. More than half of the world’s population currently lives in cities, and that number is expected to increase significantly by the end of the century, potentially leading to a dramatic rise in CO2 emissions if new city dwellings are built with steel and concrete.

Transitioning to wooden buildings would require the establishment of new timber plantations, as well as harvesting from natural forests. This would not interfere with food production, but a loss of biodiversity may occur if not carefully managed, the researchers cautioned.

“Increasing carbon storage in cities in parallel to land ecosystems is very important for this transition to succeed as a climate change mitigation strategy. Forests have to regrow after harvest and accumulate at least as much carbon as they stored before. The lifespan of timber buildings has to be at least as long as the time needed to repay ‘the carbon debt’ in harvested forests on a sustainable basis,” said co-author Galina Churkina.