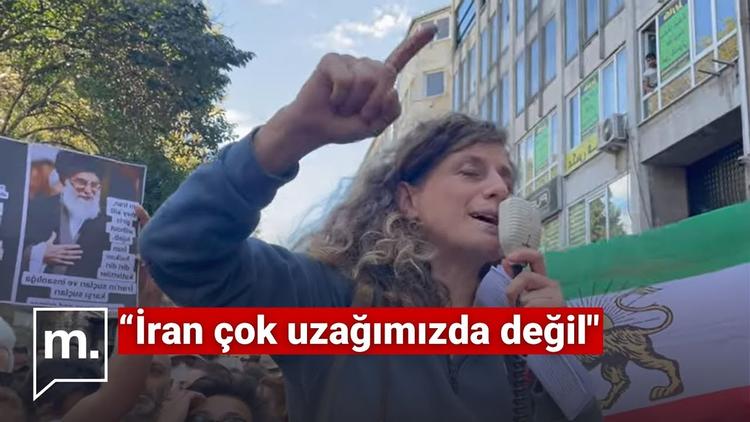 From video campaigns circulating on social media to street protests and singers cutting their hair on stage — women from all walks of life in Turkey have expressed solidarity with the ongoing protests in Iran. In a country where women’s rights keep deteriorating, the murder of Mahsa Amini hits close to home. 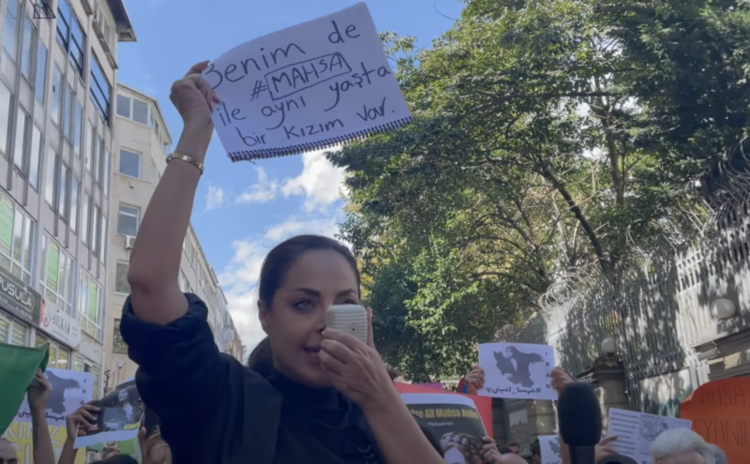 Screenshot taken from the video report by Medyascope TV from a rally held outside of the Consulate of Iran in Istanbul on September 21, 2022.

On September 21, crowds gathered outside the Consulate of Iran in Istanbul, holding Mahsa Amini’s photographs and banners. Local police prevented a similar protest from taking place in Istanbul’s iconic Taksim Square on September 20, according to local reports.

Women from cities across Turkey joined protests in solidarity in the days following the news of Mahsa Amini’s death at the hands of Iran’s morality police.

“We support the revolt of women and tell them, ‘Your protest is our protest.’ This struggle is the joint struggle for freedom because we all know very well this mentality of animosity against women. We are against the male-dominated system that tries to remain standing by seizing women’s rights and lives. We will continue to call (authorities) to account for all femicides. And once again, from here, from everywhere we struggle, we salute the protests on Iran streets, the slogans of ‘Jin, Jiyan, Azadi’ by also uttering the slogan of ‘Jin, Jiyan, Azadi.’”

HDP’s jailed leader, Selahattin Demirtas, also joined the protests in solidarity from his jail cell by shaving off his hair.

During her concert on September 26, Turkish singer Melek Mosso cut strands of her hair before she said, “Tonight I sing my songs for all the women, no one can take our freedom from us.”

Turkish musician Melek Mosso who had previously been targeted Turkey's government and got her concerts restricted multiple times, cut her hair on stage in solidarity with #IranProtests for #MahsaAmini. pic.twitter.com/HJjvEhX6IK

Founder, artistic director, and conductor of the well-known Bogazici Jazz Choir tweeted “Enough!” sharing a clip of the choir that went viral.

Speaking to journalists in Ankara on September 29, the leader of the opposition Republican People (CH) Party, Kemal Kılıçdaroğlu, said, “Women should not be the ones paying the price in any country or the corner of the world. What we have to do is respect women.”

In a Twitter thread, the woman leader of the right-wing Iyi (Good) Party said,

It is the most basic and sacred right of women to lead a happy and peaceful life, to be free in their choices and to live without being pushed around.

We can never accept the contrary.

On this occasion, I wholeheartedly greet the women who took to the streets for their freedom and rebelled against oppression in Iran;

I call on the Iranian administration to listen to the right voice raised by women for a dignified life and to make urgent reforms that befit human dignity.

The vocal support for protests in Iran was absent among members of the ruling Justice and Development (AK) Party.