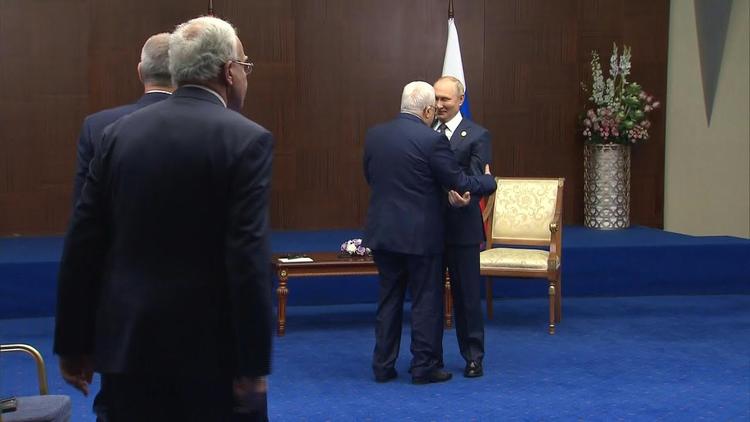 Ann Arbor (Informed Comment) – Barak Ravid at Axios reports that Biden administration officials are furious about remarks by Palestinian President Mahmoud Abbas saying he lacked confidence in the US as a mediator.

What Ravid does not say is that Washington has no right, none, to get on a high horse. Since the US sponsored and co-signed the Oslo Peace Accords in 1993, which guaranteed Palestinians a state in the West Bank and Gaza by 1997 in return for PLO recognition of Israel, Palestinians have been royally screwed over. Not only did the Israelis not withdraw from Areas C, B, and A in turn, as the accords specified, they doubled the number of squatters they sent from Israel to take over private Palestinian land just in the 1990s alone. That squatting process has accelerated in recent years. In the Trump era, the US cut the Palestinians off at the knees, defunding aid programs left and right.

The Biden people appear to think that Abbas owes them for restoring several hundred million dollars of aid to the Palestinians.

But, and I wish administration officials could hear this loud and clear, Palestinians don’t want to sell, for some aid money, their aspiration for statehood. They don’t want to sell their birthright to the land that their ancestors had farmed for, in many cases, thousands of years, and which has now been usurped from them by the Zionist movement, which originated among modern European Jews.

The US has played a very sinister role in prolonging and deepening the suffering and expropriation of the Palestinian people, clearly siding with the far right wing governments of Israel at every turn.

Is it any wonder that the Palestinians have lost patience?

On Thursday, Abbas had met with Vladimir Putin at a summit in Astana, Kazakhstan. Abbas said that he had lost confidence in the United States as a mediator in the Israeli-Palestinian conflict.

The Moscow-educated Abbas said, “We have no confidence in America, and you know our opinion. We just don’t have any confidence in it and do not rely on it, and we don’t accept that America should be under any circumstance the only party in resolving the problem.” He added that the Palestinians would only accept American mediation if it was part of the Quartet that includes Russia.

The Quartet consists of the European Union, Russia, the United States, and the United Nations, and has conducted negotiations between the Israelis and the Palestinians since it was established by the UN Security Council in 2002. Its main principles are non-violence, recognition of Israel, and implementation of Security Council resolutions (on a two-state solution). I’d just make the editorial comment that the Quartet, and Putin’s Russia, has not been more effective as a mediator than the US, which is to say that both of them have completely failed.

Abbas urged a rebooting of the Quartet process, saying that the negotiations simply cannot be left to the United States on its own. Palestinians have complained for three decades that there is no difference between the US position and the Israeli one whenever they have engaged in negotiations, so that the US acts as an echo chamber for Tel Aviv rather than as an independent referee.

Abbas said during the meeting, “Mr. President, we are completely satisfied” with Russia’s stance towards the Palestinian people. He added, “Russia adheres to justice and international law, and that is enough for us.”

In the context of the Israeli aggressive theft of Palestinian land and settling of hundreds of thousands of Israelis on the stolen land, the comment about Russia’s commitment to international law (i.e. the two-state solution) makes some sense.

In the context of the Russian invasion of Ukraine, however, Abbas’ comment sounds tone deaf. You would think he would sympathize with another occupied people, the Ukrainians, rather than praising the occupier.

Except that the Ukrainians have no sympathy, either, for another colonized people and have been stridently pro-Israel. Kyiv seems hurt and upset that Israel has tried to remain neutral between Russia and Ukraine and to keep on Putin’s good side, but that hasn’t stopped President Volodomyr Zelensky and his cabinet officials from their strong backing for Israel.

So since he is getting no support from Ukraine, and since the US has its thumb on the Israeli side of the scale, it makes sense to Abbas to seek Russian support for the Palestinians. Hence, his attempt to turn to the Quartet.