Ann Arbor (Informed Comment) – The ayatollahs who rule Iran claim to do so in the name of Islam. Their interpretation of Islam, however, is often rooted in a medieval commentary tradition that added accretions to the central scripture, the Qur’an.

The Qur’an was recited in Mecca and Medina by the Prophet Muhammad in the period 610-632 of our common era, according to the Muslim tradition — some six centuries after the ministry of Jesus of Nazareth. Although it is rooted in west Arabian society, it is a cosmopolitan document that reflects the historical situation of that day. The Hijaz, or western Arabia, was wedged between the Christian Eastern Roman Empire to the north and the Zoroastrian, Sasanian empire of Iran to the south and east. Iran had what is now Yemen and Iraq, and from 603 it gradually conquered the Near Eastern possessions of the Eastern Roman Empire– eastern Anatolia, Syria, the provinces of Palestine and Egypt. People in western Arabia must have worried that they would be next.

We do not have very much in the way of information from primary sources for the position of Arabian women before Islam. In ancient times, there were Arabian queens. Even in late antiquity, there is reason to believe they had their own property, since this shows up in the Safaitic inscriptions in Old Arabic in the four centuries after Christ. This point is important, since in many cultures, such as medieval and early modern Europe, married women lost ownership of their property when they married.

The Qur’an commands people to avoid aggressive conflict, to avoid thinking themselves better than others, and generally urges a compassionate and open-minded approach to the other.

I wrote that in my book, Muhammad: Prophet of Peace amid the Clash of Empires, of one passage in the Qur’an:

‘People, we have created you male and female and made you nations and tribes so that you may come to know one another. The noblest of you in the sight of God is the most pious of you. God is knowing and aware.’

The Qur’an here celebrates gender and ethnic diversity as an enrichment of the human experience. Encountering someone very different, it says, presents an opportunity to learn, and should not be viewed as a source of potential bigotry or conflict. The verse makes explicit the idea that men have something to learn from women, which seems a progressive notion in late antiquity. Further, the Qur’an here puts forward the principle that social status is determined not by ascriptive identity, not by how powerful or wealthy a group one is born into, but by piety. Again, given the mention of women, it is implying that a pious woman is better than a powerful but impious man.”

As for dressing modesty, the Qur’an is primarily concerned with nudity.

When I wrote about Bonaparte’s 1798 invasion of Egypt, I read large numbers of French memoirs of the campaign. One thing that surprised many French observers was the state of undress they often found women in, especially in rural villages. They said many village girls and boys didn’t wear clothing until puberty. Even adults seemed to think nothing about disrobing by the side of a body of water and diving in for a bath, regardless of audience. Poor women’s clothing was often in tatters and didn’t cover up much. Some holy men and women went nude to stress their difference from ordinary folk.

Even in the twentieth century, a lot of people were casual about some nudity in the tropics, where it is hot and humid and clothes can be a hassle. I lived and traveled in Africa in my youth, and in some parts of that continent at that time it was common for women not to wear anything over their breasts. This was true in villages even in Muslim societies such as Senegal.

My suspicion is that Arabian women were similarly used to going about without much clothing and perhaps in some circumstances, as when bathing in the Red Sea, nothing at all.

Even just decades after Muhammad, one of the murals at the Qusayr Amra desert palace of the Muslim Umayyad kings show women in a state of partial undress, including a tall woman in a mixed-gender public bath wearing nothing above the waist.

I slightly revised the translation by British Arabist A. J. Arberry of Qur’an, Sura of Light, 24:31, one of the key texts having to do with women’s appearance, here:

Despite what the learned Muslim schoolmen of the medieval period concluded, which is upheld by many contemporary Muslim clerics, this verse does not have the slightest thing to do with covering up a woman’s hair or wearing anything on her head, as should be obvious from a logical examination of it.

The custom of veiling in the sense of wearing a head covering or a diaphanous veil over the face was common among Byzantine upper class women and among the same class in Sasanian Iran. Those Muslims who adopted this custom borrowed it from these other civilizations (both of which Muslim armies ultimately overwhelmed). It isn’t in the Qur’an.

So the first line about covering their furūj is clearly an insistence that they wear a loin cloth to cover their private parts.

As for their “charms” zīnah, these fall in two parts, what should be hidden and what is clearly visible. Women have many charms, and different cultures have fetishized some over others. We don’t really know what “charms” are here. But they likely include the breasts, which is indicated by the phrase about wearing a shawl over the breasts.

The charms obviously do not include a woman’s face or hair, since the latter are outwardly visible.

Moreover, it would not make the slightest difference if a women wearing a hijab stamped her feet or not, nothing would show by doing so. In contrast, if she stamped her feet her breasts would jiggle, and if they were loosely covered, the cloth might slip. It might be a way to catch the eye of that handsome Arabian guy she had her eye on, but the Qur’an advises against it. That is wisdom, since in such matters, less is usually more.

My interpretation of the bit about being allowed to reveal some of their charms to close relatives and servants is that women did not have to wear the shawl over their breasts at home.

I suspect that the middle class South Asian Muslim way of veiling may exemplify what the Qur’an had in mind. In India, Pakistan and Bangladesh, at least before Saudi influence, almost all Muslim women went bareheaded, and many still do today. But when they are in public they wear a folded shawl over their shoulders that extends down also to cover their breasts. It is called a dupatta, from a Sanskrit root meaning “two-ply.” They wouldn’t wear it just sitting around at home. 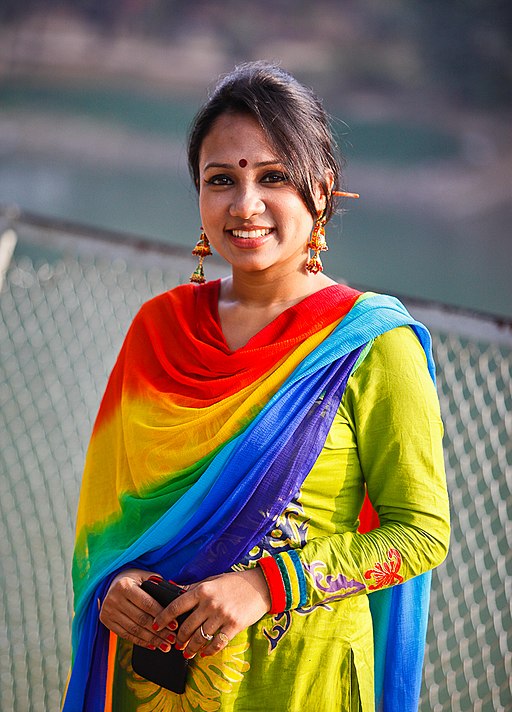 So this practice exactly fits the language of the Qur’an and I suspect that somehow South Asian Muslim women have preserved a very early Islamic sartorial tradition. There are far more South Asian Muslim women than Middle Eastern women, by the way, though not all Middle Eastern women have gone in for the vogue of the hijab or niqab in the past 50 years. (When I first went to the Middle East in the late 1960s almost all women went about bareheaded.) A friend tells me that urban young women in Tunis are mostly unveiled nowadays. I wonder if the Iranian protests will have an effect on the Arab women’s movement.

My own guess is that the modern bra does the work the Qur’an wanted the khumur to do.

I should underline that I entirely respect the decision of women to veil if that is what their own beliefs and conscience dictate. I’m just doing history and philology. There are legitimate reasons for women to wish to avoid objectification and to preserve their privacy in public. I think the US and Turkey get it right in allowing women to dress as they please, and that Iran and France are both wrong to dictate, the former mandating veiling and the latter forbidding it.

In any case, the religious oppression in countries like Iran appears to be turning some in Generation Z away from religion entirely, so that they might not have much patience with this column.