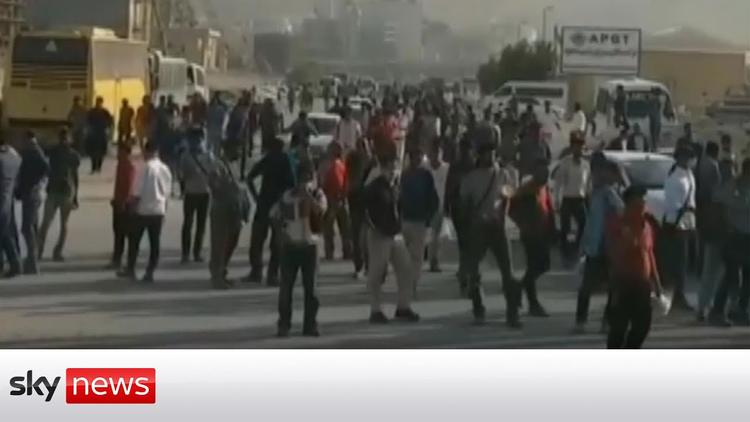 Ann Arbor (Informed Comment) – Because of internet blackouts, news of Iran’s ongoing protests only leaks out in dribbles and drabs, sometimes a couple of days later.

Reports did circulate on Friday of a large demonstration in Zahedan after people left Friday prayers to gather in the city center. Police allegedly used live fire to break up the rally. Zahedan is the southeastern Iranian city where government security forces committed a massacre On September 30.

Activists claim that as many as 90 people were killed two weeks ago, while the government puts the number of dead at 25. It is alleged that 5 revolutionary guardsmen were also killed that day.

Local activists say that protesters had gathered two weeks ago before the police station, and that security forces had subjected them to live fire, shooting them down. The Iranian government dismisses them as “separatists and terrorists.” There has been a Sunni Baluch separatist movement for years, which has sometimes engaged in terrorism, but there is no evidence that these considerations produced the showdown of two weeks ago. Rather, Baluch in the city were protesting against the authoritarian character of the government, just as Iranians across the country were demonstrating for the same reason.

Local passions are thus inflamed against the Tehran government. These are exacerbated because most people in this area of Iran are of Baluchi heritage and are Sunni Muslims, while the central government is avowedly Shiite and dominated by Persian speakers.

🎥 Today, Friday Mher 22nd, at the same time as the 27th day of nationwide protests, according to the videos published by the protesters in the city #زاهدان, they have captured the main street of the city with a large presence.#OpIran#مهسا_امینی#پرواز۷۵۲ #زن_زندگی_آزادی pic.twitter.com/mudPPzeem0

According to a major Teachers Union, on Thursday, female students in Shahid High School in Ardabil, northwest Iran, staged a rally in which they chanted slogans against the government.

The teachers write, “uniformed forces attacked this school and beat a number of students after which some were arrested. Also, uniformed forces attacked some parents of students. Eyewitnesses said that some 10 students were injured and were taken to Fatemi Hospital for treatment. Seven of the students have been handed over to the security forces with the cooperation of the school principal, and there is no news of their whereabouts.”

On Twitter, it was reported that the students had been chanting “Death to the Dictator,” and that the police beat these girls so badly that several were hospitalized and one died of her injuries.

The disappearance of the seven students raises alarms, since dozens of children appear to have been taken by the regime, and their fates remain unknown.

On Wednesday, at least 7 people were killed in demonstrations, 4 of them Iranian security personnel, and shopkeepers went on strike in several Iranian cities in sympathy with the youth protesters

We have seen some oil workers go on strike in sympathy with the protesters, and now it is alleged that some shopkeepers are closing up for the same reason. It may be that the protests are spreading beyond their initial base in youth activists.

Also on Wednesday, a video went viral showing police raping a young woman, which sparked widespread outrage in the country.