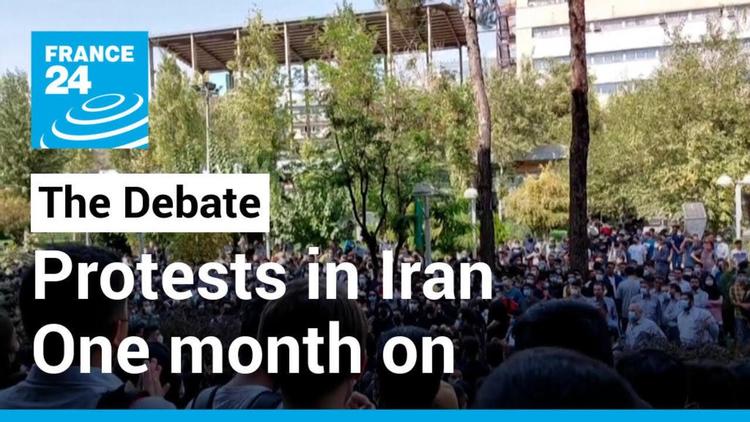 They appear to be wearing the uniforms of the Basij paramilitary forces, a branch of Iran’s powerful Islamic Revolutionary Guards Corps (IRGC).

The photos have led to accusations that the authorities are using minors to help crush the demonstrations.

Protest rallies erupted soon after the September 16 death of Mahsa Amini, who died days after she was detained by Iran’s morality police. Iran’s Society for the Protection of Children’s Rights expressed concern over the photos, noting that the use of child soldiers was against international law.

Last week, over 500 members and supporters of the Imam Ali Society, a local charity, said the authorities had recruited children from impoverished families to help “suppress” the ongoing street protests. In exchange, the minors received a “few bags of food,” the charity said.

Hadi Ghaemi, the executive director of the New York-based Center for Human Rights In Iran, told me that the “desperate and morally bankrupt government” in Iran “has no regard for its own people” and “its only concern is brutal self-preservation.”

Why It Matters: Iran has a record of using children as combatants, including during the 1980-1988 Iran-Iraq war. More recently, Tehran has been accused of recruiting Afghan refugee children living in Iran to fight in the conflict in Syria. There were also reports that the authorities had recruited minors to suppress protests in 2011.

Journalist Roza Mohtasab from the fact-checking site Factnameh.com said the recent photos, believed to have been taken in Tehran, appear to be genuine. She said the children in the photos appear to be wearing the uniforms of the Student Basij, a subgrouping of the Basij.

“These images have not been manipulated, they’re new,” Mohtasab said. “From the evidence that emerged online, we can say that children have been employed in the current round of protests.”

Mohtasab said it was not clear what role the minors were playing in the government crackdown. “It could be that this was part of a maneuver for them to become familiar with the situation,” she said.

What’s Next: Tehran could employ a greater number of minors to help control the angry protests. There have been mounting reports of security forces becoming exhausted from quelling rallies across the country for nearly four weeks.

“Distributing all your special police forces becomes challenging when the protests are spread out throughout [the country],” analyst Saeid Golkar, who has authored a book on the Basij, told me.