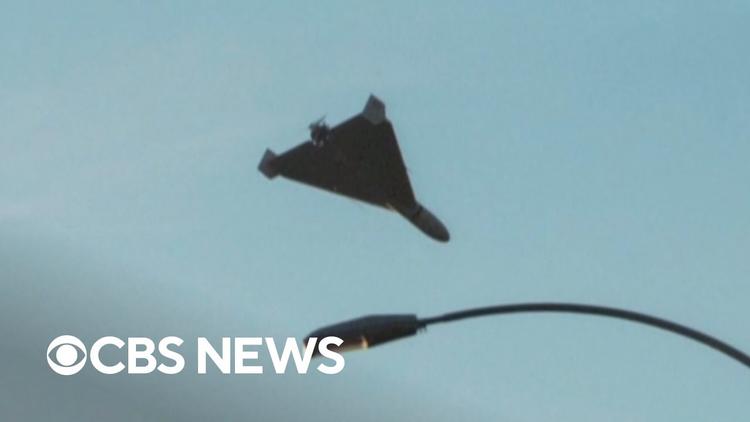 Many Ukrainians are facing the prospect of a winter of power outages after about 30% of the country’s power stations were knocked out in just over a week. The deputy head of the president’s office, Kyrylo Tymoshenko, has warned that the country needs to be prepared for “a hard winter”.

It has been reported that a great deal of this damage is being inflicted by Shahed-136 “kamikaze” drones, acquired by Russia from Iran in recent weeks. On Monday October 17 alone, Russia launched 43 Shahed drones at Kyiv, killing four civilians as the focus of Russia’s attacks turned again to Ukraine’s cities.

Ukraine’s power and water infrastructure has been the most common target in recent days. Iran’s drones have a proven track record in this respect, having reportedly been used by Houthi rebels to strike at oil facilities in Saudi Arabia in 2019.

But drones have been deployed in numbers by both sides since the beginning of the war. The Turkish Baykar Bayraktar TB2 was used effectively in the first months to destroy Russian artillery systems and armoured vehicles. TB2s are the size of a small plane with a range of 300km and a flight ceiling of 7,500 metres. They rapidly acquired an almost mystical aura for Ukraine’s soldiers who composed songs in their honour.

But TB2s are expensive – about US$2 million (£1.78 million) each – compared with kamikaze drones which are available for US$20,000 (£17,800) each. And in a war in which neither side has gained control of the sky, these large drones are likely to be shot down by the adversary’s air defences, which disqualifies TB2s from more extensive use on cost grounds.

Another of the large drones is the Mohajer-6, also supplied by Iran (although it should be noted that Iran has consistently denied supplying drones to Russia for use in Ukraine). Ukrainian forces recently captured a Mohajer-6, which has a maximum flight speed of 200kmh, a ceiling of 5,400 metres and can fly for 12 hours.

Closer inspection can allow the Ukrainian defenders to work out the best way to counter these weapons. The fact that Russia appears increasingly to be relying on cheap Iranian drones also suggests a diminished capacity to produce its own Orion armed drone, which saw action in Syria.

But it is the relatively radar-immune, low-flying Shahed drones that have attracted headlines recently. These are what is known as “loitering munitions” – so-called because they can wait in the air to identify the target before smashing into it. Hence the nickname, kamikaze drones.

Ukraine has been using several types of loitering munition since the start of the conflict. These include the RAM II, a Ukrainian-designed-and-manufactured drone with a range of 30km and a weapons payload of 3kg, which the Ukrainian public crowdfunded US$9.5 million to acquire in recent weeks. There is also the ST-35 Silent Thunder, which has a 3.5kg payload and can also attack targets within a range of 30km.

Ukraine also acquired hundreds of US Switchblade 300 drones in March, which are small and light enough to fit in a backpack and have a range of 15km and a payload of just under 3kg.

In addition to the Iranian drones, Russia has been deploying its catapult-launched Lancet drone, which has a payload of 3kg and was used in Syria with devastating results. They also have the KUB-BLA, one of which was recovered in Kyiv in March – prompting speculation it was deployed as part of an assassination attempt on Ukrainian president Volodymyr Zelensky. The KUB is hard to detect and has a payload of 1kg of ball bearings – a classic anti-personnel weapon.

But the Shahed-136 offers Russia a different capability, with its 2,000km range giving the ability to strike targets much deeper into Ukrainian territory. Deployed in large numbers, Russia can use a rudimentary swarming tactic to try to overwhelm Ukrainian air defences.

So are these drones a gamechanger?

To call these kamikaze drones “gamechangers” in the war in Ukraine would be to overstate their significance. While they keep a low profile on radars and are relatively cheap, they remain dependent on Russian military intelligence to guide them towards targets.

They are also, according to Ukrainian reports, vulnerable to being shot down due to their low sophistication and relatively slow airspeed of about 118mph. Ukraine claims to have shot down more than 80% of the drones deployed against Kyiv this week.

The Guardian: “Ukraine police appear to shoot down Russian drone

Iranian drones are relatively low-tech and guided by a civilian GPS system which can be jammed. Ukraine has acquired Polish SKY CTRL drone jammers, although these have a range of only 10km. To improve Ukraine’s anti-drone defence, Nato defence ministers recently agreed to provide hundreds of drone jammers. The US has also promised to speed up delivery of the more powerful Switchblade 600 drone, which has a range of up to 90km.

For both sides in this conflict, drones have been most effective in a less sensational, enabling function. By providing cheap “eyes in the sky”, they improve the precision of artillery fire and increase situational awareness to the level of a foot soldier. In this way, drones have effectively changed the operational tempo of artillery assault from about half an hour (using traditional means of target acquisition) to just three-to-five minutes.

But drones on their own will not give either side a decisive advantage in winning this war. The bulk of the fighting and occupation of territory will still be done by soldiers in armoured vehicles.

However, drone attacks seem to maintain psychological pressure, undermining the morale of the military and civilians alike. And being able to strike at people and infrastructure hundreds of kilometres behind the actual lines of contact in effect offers Russia a new “front”. Ukraine’s defence chiefs must redouble their efforts to secure adequate defensive technology to ensure that this threat is quickly countered.