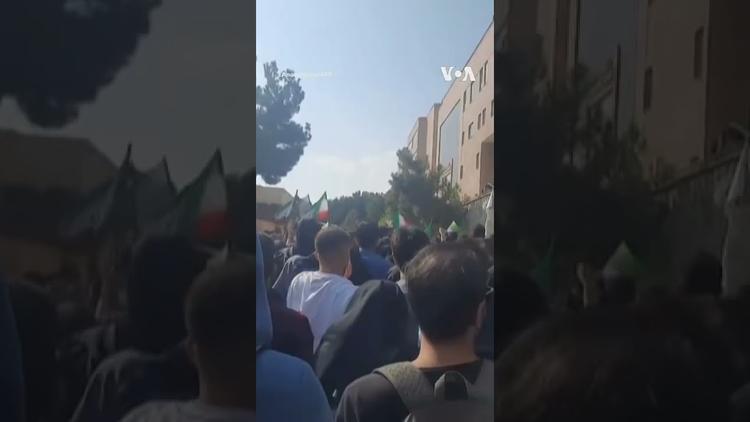 By Golnaz Esfandiari and Mohammad Zarghami | –

( RFE/RL ) – Dozens of students protested outside the law faculty at Tehran’s Allameh Tabatabei University on October 19, chanting, “dishonorable, dishonorable,” as a government official addressed a conference inside.

When government spokesman Ali Bahadori-Jahromi later came outside, he was confronted by around 100 students. The official IRNA news agency said the official “appeared among the protesting students” and “talked with them.” IRNA accused the protesters of chanting “inappropriate and immoral slogans.”

It was the latest demonstration at a university in Iran since nationwide protests erupted following the death on September 16 of Mahsa Amini, a 22-year-old woman who died shortly after she was detained by Iran’s morality police for allegedly violating the country’s hijab law.

As the scattered anti-government protests rage across Iran for a fifth week, universities have turned into a major battleground between the protesters and the authorities.

“The driving force behind the protests is now universities, which are providing the fuel for the survival of the protest movement,” says Washington-based political analyst Ali Afshari, a former student leader who was jailed in Iran for his activism.

Numerous protests have been held at universities, particularly in Tehran, where many students have refused to attend class. Protesting students have chanted “woman, life, freedom” and “death to the dictator” during the rallies. Some female students have removed and burned their head scarves.

Male and female students have also broken social taboos by holding hands and singing together. Meanwhile, some art students have covered their hands in red paint to protest the deadly state crackdown on the demonstrations.

The authorities have cracked down violently on the university protests, beating and detaining dozens of students.

The most violent incident occurred at Tehran’s prestigious Sharif University of Technology on October 2. More than 30 students were detained after security forces raided the university.

Monitoring groups outside Iran have documented the detention of more than 200 students in the past month, although they believe the real number is higher.

Tara Sepehrifar, senior Iran researcher at Human Rights Watch, says the protests at Iran’s universities are a “testament to the resilience” of the students who are mobilizing in the face of “very restrictive circumstances.”

“Despite great risks to their safety, each demonstration, sit-in, protest is echoing the broad progressive demands, while insisting on their immediate ones such as release of detained students and at the same time pushing the boundaries on campus by removing head scarves and mixing the gender-segregated dining halls,” Sepehrifar told RFE/RL.

Universities and students have been at the forefront of the struggle for greater social and political freedoms in Iran. In 1999, students protested the closure of a reformist daily, prompting a brutal raid on the dorms of Tehran University that left one student dead.

Over the years, the authorities have arrested student activists and leaders, sentencing them to prison and banning them from studying.

Some university professors and lecturers have expressed solidarity with the protesters.

In a joint statement on September 29, over 200 university staff called for the release of detained student protesters and criticized the government’s crackdown on the peaceful demonstrations.

Iran’s Baluchistan Under Lockdown, Blackout In Wake Of ‘Bloody Friday’

In a rare act of protest, Encieh Erfani resigned from her post at the Institute of Advanced Studies in Basic Sciences, which is located in the northwestern city of Zanjan. Erfani, an assistant professor in physics, stepped down while she was out of the country.

“Student protesters were chanting ‘the streets are soaked with blood, our professors are silent,’” she told RFE/RL’s Radio Farda. “So I submitted my resignation.”

She said the protests were the result of students’ “accumulated anger” towards Iran’s clerical establishment, which has stifled free speech and severely limited Internet freedoms.

A student at Sharif University, who did not want to be named for fear of retribution, told RFE/RL that authorities closed the university after students held protests.

“But the prevailing atmosphere is not calm, and as soon as the university reopens there is a high possibility of clashes and demonstrations,” the student said.

Student protesters have called for the release of Mohammad Nejad, who studies aerospace engineering at Sharif University. Nejad, who was arrested on September 21, is being held at a prison outside Tehran.

“My dear student Mohammad Nejad is among the best students in the aerospace faculty,” lecturer Mahdi Salehi wrote on Twitter on October 19. “Mohammad doesn’t belong in jail.”

Golnaz Esfandiari is a senior correspondent for RFE/RL focusing on Iran. She has reported from Afghanistan and Haiti and is one of the authors of The Farda Briefing newsletter. Her work has been cited by The New Yorker, The New York Times, The Washington Post, and other major publications. Born and raised in Tehran, she is fluent in Persian, French, English, and Czech.

Mohammad Zarghami is a senior journalist and anchor at RFE/RL’s Radio Farda who reported from Tehran before moving to Prague. He focuses on Iran’s politics and social issues. Zarghami has conducted dozens of interviews with prominent Iranian and international public figures.