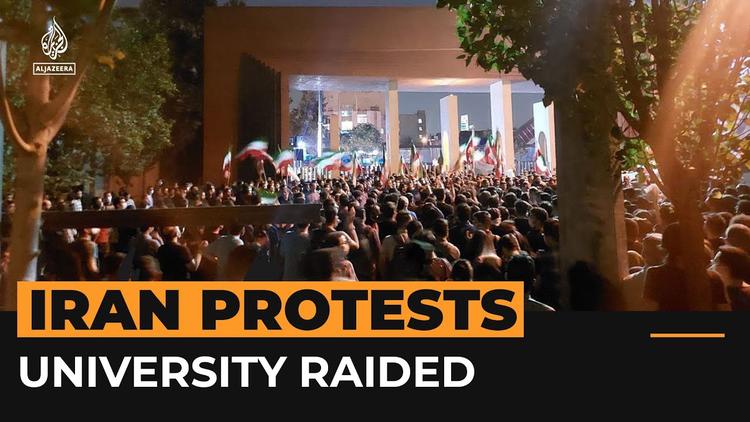 Ann Arbor (Informed Comment) – On Monday in Iran, demonstrations, marches and rallies continued for the 17th day, spearheaded by high school and college students. Many universities entered a third day of class boycotts by students, who said they would not return to their studies until the government released imprisoned students. At some universities students staged sit-ins, according to the London-based Kayhan International. Nerves were still raw about the brutal attack by security forces on students in the parking garage at Sharif University of Technology, one of the best educational institutions in Iran. It would be like the National Guard beating up students at MIT. Some 37 students were arrested for protesting, though the Iranian state said 30 had been released. Some of the remaining seven were sent to the notorious Evin prison, where, leaked video last year showed, authorities have tortured prisoners. Students in universities all around Iran demonstrated against the brutal treatment of the students at Sharif University.

Iran International, a Saudi-funded newspaper that nevertheless has done solid reporting on Iran, said that there were demonstrations Monday at Tehran University, Allamah Tabatabai University, and Beheshti University in the capital. Among the slogans they chanted was “You raise the standard of Husayn but kill the people.” Imam Husayn was the grandson of the Prophet Muhammad who was martyred by the armies of the Umayyad king Yazid I in 680 A.D. Shiites commemorate his martyrdom with tears and processions annually. The students were throwing the Shiite symbols of the Islamic Republic in the faces of the ayatollahs. It would be like Christian students saying to a fundamentalist government that ‘you mourn Christ on Good Friday but you are killing the people.”

University students also rallied against the government in universities in Mashhad, Semnan, Tabriz, Isfahan, Shiraz, Kermanshah, Sanandaj, Zanjan and Yazd, among other such institutions.

Ethnic groups, including Kurds in the west and Baluch in the southeast, have protested, as well. On Monday members of the Arab minority in Khuzestan Province in the southwest urged that group to participate in the demonstrations. There are about 5 million Arabs in that province, about half of them Shiite and the others Sunni, and they have sometimes been restive over their treatment by the Persian majority. Many of them are no longer Arabic speakers, so that the “Arab” identity is mostly a matter of family and history.

School girls without their hijabs confront and chase off a director of education.

They chant “Bisharaf!” towards the end which is a harsh insult in Persian meaning dishonorable and unethical. #MahsaAmini #ZhinaAmini pic.twitter.com/gXNjMtOHm7

Schoolgirls in schools in Tehran and Karaj attended rallies bareheaded and changed “down with the dictatorship,” and “we don’t want the Islamic Republic!”

The clerical leader, Ali Khamenei, who is in frail health, nevertheless addressed military cadets on Monday, denouncing the demonstrations as mere hooliganism and sabotage, saying it was stirred up by the U.S. and Israel (it wasn’t). The official IRNA news site reprinted his rambling attack on the protesters. He praised the country’s security forces for putting down the protesters, and warned that anyone who fought back against the police or army or Basij paramilitary was weakening the security of Iran.

His speech dismissed the protesters as a tiny sliver of dissidents who did not represent the vast bulk of the country. Shades of Tricky Dick Nixon and his dismissal of students protesting the Vietnam War as being outweighed by the “silent majority.”

The most interesting thing Khamenei said was, “Behind the scenes in the recent cases, these ruffians are there, and the fight is not over the death of a young girl or over a head wearing a hijab or not wearing a hijab. Many of those who do not wear full hijab are among the serious supporters of the Islamic Republic and participate in various ceremonies. The fight and debate is about the independence and standing and strengthen and authority of Islamic Iran.”

I’ve never seen a cleric of the Islamic Republic say that poorly veiled women (bad-hejab) could nevertheless be valued supporters of the Islamic Republic of Iran. It seems these Gen Z women have scared even Khamenei into backing down a bit on the veiling issue. That would be a remarkable achievement in itself, if I am reading his statement correctly.