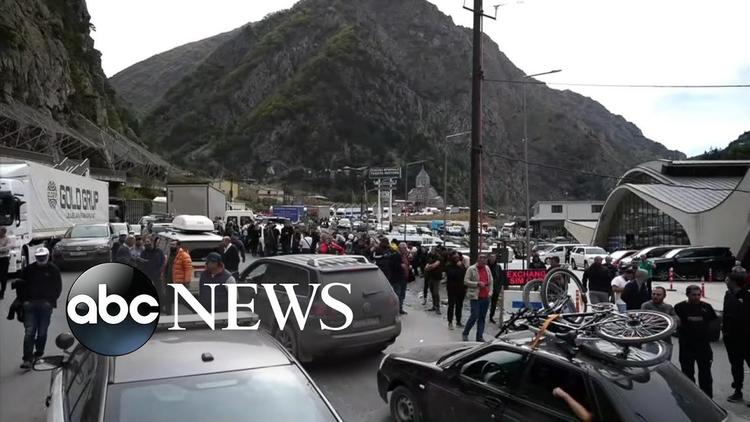 ( Foreign Policy in Focus ) – The sudden mass exodus last week of Russian men fleeing military service is a positive development. It is a sign of shifting political momentum in Russian society against the war.

Encouraging and supporting those who refuse to participate in an unjust mission deserves greater attention as a potential means of countering Russia’s military aggression against Ukraine.

So why have Finland and other European governments

The scale of the recent exodus is enormous. Nearly 100,000 Russians entered Kazakhstan in the week following Putin’s military call-up, and large numbers entered Turkey and Armenia. More than 50,000 crossed into Finland before the border was closed, double the rate of previous weeks.

The sudden flight of so many reflects deep unease with the war. When combined with evidence of low morale and disaffection among Russian troops in Ukraine, it exposes Putin’s vulnerabilities and creates new opportunities for attempting to undermine the war.

The experience of Russians avoiding war in Ukraine echoes what many of us in the United States faced during the Vietnam War. Hundreds of thousands refused the draft, with tens of thousands fleeing to Canada and Sweden. Others like myself entered the military but spoke out against the war from within. Morale and discipline deteriorated, desertion rates soared, and combat effectiveness eroded. The situation in Russia is not identical, but the rush to escape conscription shows widespread unwillingness to fight.

From the beginning of the conflict Russian forces experienced significant morale and disciplinary problems. News sources have reported incidents of dissension, desertion, and refusal to fight among some units, including members of the elite Russian National Guard. A senior British intelligence official spoke of Russian troops refusing to carry out orders and sabotaging their own equipment. Radio Free Europe reported a combat refusal in July by 78 soldiers in an Air Assault Brigade near Luhansk. Family members of soldiers have spoken up on social media to ask when the war will end.

In August, paratrooper Pavel Filatyev went public with a 141-page journal describing the ordeal his unit faced during combat in Kherson and Mykolaiv, declaring, “I will not participate in this madness.” He told a reporter:

I am not afraid to fight in war. But I need to feel justice, to understand that what I’m doing is right. And I believe that this is all failing not only because the government has stolen everything, but because we, Russians, don’t feel that what we are doing is right.

Military recruitment offices have come under attack. Newsweek reported in May that a dozen attacks occurred in the early weeks of the war, quoting a senior official of the Russian General Staff that “arson attacks on military registration and enlistment offices have become a constant feature of life in Russia.” Additional fires at recruitment centers and administrative buildings were reported in response to Putin’s recent call-up. An independent Russian media site claimed there were 18 attacks in the days after the mobilization was announced, with a total of 52 incidents since the war began. The Washington Post reported anger and panic among recruits and their families as the mobilization started. Videos on social media showed shouting matches and fighting at some locations.

Given the censorship in Russia and pervasive information campaigns emanating from both sides in the war, it’s impossible to verify all the claims of military unrest and disaffection. What’s undeniable, though, is that Russia’s vaunted army has performed poorly in its campaign to subjugate Ukraine. Low morale and discontent in the ranks have likely contributed to that result.

Research shows that defections and loyalty shifts among members of security forces can be crucial to campaigns for political change. When recruits and members of the military are unwilling to cooperate, the power of corrupt authority erodes, and policy begins to change. Putin’s war cannot succeed if recruits avoid service and soldiers refuse to fight.

Western policy can help by encouraging and aiding Russian dissent. Under international law and European Union regulations, those who face punishment for refusing to participate in illegal acts such as Putin’s war qualify for legal status as refugees. The United States and European governments should open their doors and allow tourist visas for potential recruits and soldiers who refuse to serve in Ukraine, making it easier for opponents of the war to apply for asylum and refugee status.

Civil society groups can help by setting up networks of counseling and hospitality in frontline states. Some are doing so already, offering sanctuary and legal and other support services for Russian recruits and soldiers seeking to escape the war.

During the Vietnam era, American antiwar activists created the

Encouraging and supporting those who refuse to participate in unjust missions has been an effective strategy against militarism in the past. It deserves greater attention now as a potential means of countering Russia’s military aggression against Ukraine.

David Cortright is Professor Emeritus at the University of Notre Dame’s Kroc Institute for International Policy Studies and the author or editor of more than 20 books, including Soldiers in Revolt: GI Resistance During the Vietnam War.