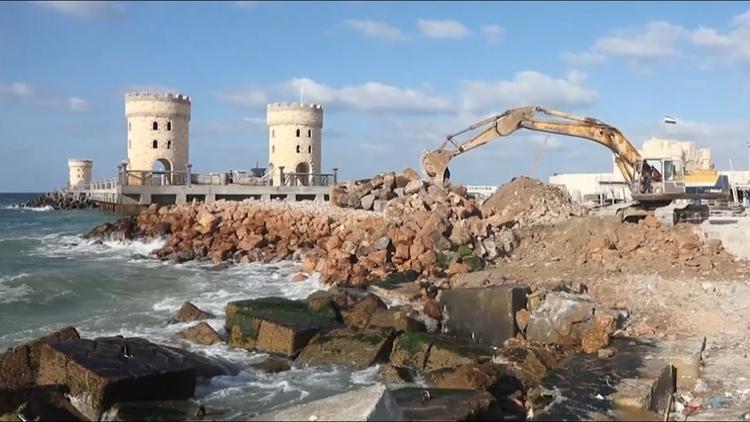 Ann Arbor (Informed Comment) – The second-largest city in the country hosting this year’s international climate change conference, Alexandria in Egypt, will struggle for its life the rest of this century and may be 33% under water in only 30 years. We may be seeing the end of a city founded 2,353 years ago.

The Conference of Parties (COP) to the United Nations Framework Convention on Climate Change first met in Berlin in 1995 and later negotiated the 1997 Kyoto Protocol as well as the 2015 Paris Climate Agreement. COP27 is being convened this weekend in Sharm El Sheikh, Egypt. It is in some ways the best place for such a conference, considering that Egypt is one of the countries most threatened by the human-caused climate emergency. In other ways, it is less than ideal, since the Egyptian state is not very good on climate issues and has even harassed environmentalists. It is a highly authoritarian state that has jailed the heroic youth of the 2011 revolution, with one of them, Alaa Abdel Fattah, nearing death owing to a prison hunger strike.

Alexandria was founded by Alexander the Great in 331 BCE after he took Egypt away from the Achaemenid Empire of Iran. Alexandria is synonymous with culture, having been the home town of Euclid and the site of the ancient Library, as well as the crucible of Neoplatonism (Plotinus was from Egypt). The great Jewish philosopher Philo lived and worked there. One of the foremost women philosophers and scientists, Hypatia, hailed from this city, where fanatical Christian mobs cut her down as a pagan in 415 CE. In modern times, Napoleon Bonaparte invaded it in 1798 (I wrote a book about all that). Because of the cotton boom in the 19th century, the city attracted large Greek, Italian, French and British populations, attaining a cosmopolitanism immortalized in Lawrence Durrell’s Alexandria Quartet.

Today, Alexandria and its surroundings are the site of 40% of Egypt’s industrial production. It is the country’s major port, and important for its “manufacturing, shipping, warehousing, banking, food processing, and the production of petrochemicals and cement.”

Alexandria is at the mouth of the Delta created by the Nile River. It is surrounded on three sides by the Mediterranean and has a big lake just behind it. It is vulnerable to rising seas on several accounts. Because the Nile was dammed at Aswan from 1958, it no longer deposits new silt in the Delta, which is therefore experiencing an erosion of its topsoil. The sediments in river valleys are also young and soft, given to sinking as a result. This sinking is accelerated by drilling for fossil gas deposits. Finally, the Mediterranean is rising, and could rise 3 feet by 2050. Since a good third of Alexandria is lower than that, much of the city will likely go under water. The city is already seeing substantial shoreline erosion, visible by satellite. The amount of rainfall the city receives is rapidly increasing, contributing to fears of flooding of low-lying areas.

Sea level rise is caused by the melting of land ice, which flows into the oceans and raises their level. The ice is melting at both poles because of the heating of the earth caused by spewing billions of tons of dangerous heat-trapping gases into the atmosphere every year, such as carbon dioxide. Greenhouse gases are released when we burn gasoline in our cars, make electricity with coal or heat our homes with it, or use fossil gas.

Scientist Sayed Hemeda notes, “The Egyptian Ministry of Water Resources and Irrigation says that the sea level rose at an average rate of 1.8 mm per year until 1993. Over the next two decades, the water level rose to 2.1 mm per year, and since 2012 it reached 3.2 mm per year, which is enough to threaten building foundations.”

The Egyptian government is building some breakwaters in front of Alexandria to help limit damage from storm surges, but they won’t help with rising sea levels.

Alexandria is not the only Egyptian city in danger. Some 60% of Egyptians live in the low-lying Nile Delta. Bassem Aboulabbas at AFP observes that a third of the Delta would go underwater at 3 feet of sea level rise. This is Egypt’s breadbasket and the site of important depot cities like Mansoura and Tanta. Losing a third of the Delta would displace over 20 million people, as though Florida or New York were emptied of people. And, where will they go?

I remember Alexandria fondly from my time in Egypt. Most of the foreigners left with WW II and then the rise of Egyptian nationalism after 1952, but the old art deco architecture is still there. I remember a nice restaurant overlooking the sea that served the most amazing pink caviar. Alexandrians are an enterprising and resilient people, and played an important role in the 2011 Egyptian Revolution, about which I also wrote. I last talked to Alaa Abdel Fattah on the phone in 2014 when I was in Cairo. I found him on a train to Alexandria, to commemorate the death of the youth martyr Khaled Said, who died in police custody. Now Alaa is dying, and Alexandria is on the verge of dying. The Egyptian government, more or less a military junta, shows no sign of doing much about either.