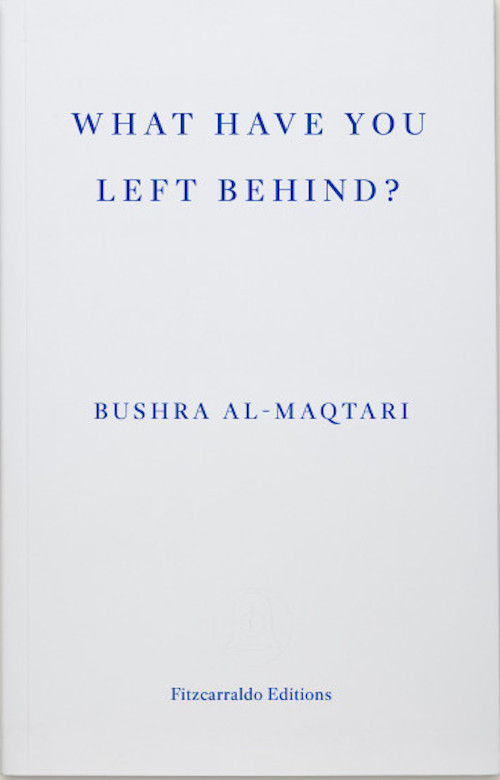 Barcelona (Special to Informed Comment) – Review of Bushra Al-Maqtari, What Have You Left Behind? (London: Fitzcarraldo Editions, 2022.)

“Only victims are real in this war, victims crushed by violence.”[1] The writer behind this sentence is Bushra Al-Maqtari, a human rights activist, journalist, and novelist. The war she refers to is the ongoing conflict in Yemen, her home country.

In the book What Have You Left Behind? the Yemeni writer places these very real victims at the center of history, listening to them and documenting their personal stories for the world to read. Al-Maqtari’s book was originally published in Arabic in 2018 and has recently been translated by Sawad Hussain in a translation that deserved an English PEN Translation Award.

Approximately 150,000 people have died as a direct result of violence in Yemen – around 15,000 of them civilians – since the beginning of the civil war in the Southern Arabian country in 2015. According to a UN estimate, by the end of 2021 – and including direct victims – the conflict had caused over 377,000 deaths, many of them due to hunger and disease combined with a lack of appropriate healthcare.

These are staggering figures and give us an essential overview of the human costs of a war that, although far more complex than this, pits the rebel Houthi movement – in alliance with former President Ali Abdullah Saleh until December 2017 and with limited support from Iran – against the Saudi-supported and internationally recognized government of Yemen. The conflict shows no signs of abetting, especially after the collapse of a six-month ceasefire in October 2022 and the difficulties to agree on a new one. Even though it is important to keep in mind the harrowing numbers mentioned above, a single focus on this sadly growing death toll would prevent us from better understanding the specific cases of human suffering that statistics can only synthetize. Giving names and voices to the people behind these figures is what Al-Maqtari sets out to do in “What Have You Left Behind?”.

Bushra al-Maqtari, What Have You Left Behind?, Translated by Sawad Hussain. (London: Fitzcarraldo Editions, 2022.). Click Here.

One of these voices belongs to Atika Amin, who lost two daughters and two granddaughters in 2016 when the Houthi-Saleh militia bombed her neighborhood in Taiz. Speaking about the tragedy that befell her family, Atika explains to Al-Maqtari: “They went out laughing, full of life, and came back as corpses on stretchers.”[2]

Also in Taiz, but in this case as a result of the Saudi-led coalition’s indiscriminate airstrikes, a whole family of five died in 2015 after their house was bombed. Adnan Saeed Amir, who defines himself as an ad-hoc rescue worker and found the bodies of the slain family, describes what it is like to always be among the first people to reach the bombed sites: “This isn’t like the images of war or massacres we see in newspapers and films. These terrifying images from our reality carve themselves onto our minds, living on even if the people in them are dead and gone. What we see can never be unseen.”[3]

What Have You Left Behind?shows how bombs, missiles or sniper fire make their presence felt in family meetings, work routines or encounters with friends. In the best case, civilians are left with a renewed scare in their bodies and souls. In the worst case, life – or life as they knew it, when the survivors lose their loved ones – comes to an end. Not even funerals offer safety, as they are often attacked, feeding new vicious cycles of death and grief.

The book does not spare very graphical descriptions of the targeting of civilians. There is no doubt that the details are certainly distressful. However, it would have been unreasonable to sanitize, only for the comfort of the reader, the crudeness that the victims themselves wanted to convey with their stories.

Many of the testimonies Al-Maqtari collects are from the southwestern city of Taiz, her hometown, which has been suffering from a Houthi siege since March 2016. However, there are also interviews with residents of Houthi-controlled Sanaa and the districts around the port city of Al-Hodeida, which saw some of the fiercest fighting of the war in 2018.

When one reads What Have You Left Behind? it appears only pertinent that an open question gives the book its title. Al-Maqtari’s interviewees have endless and poignant questions that cannot meet any satisfactory answer. Munira Mahyoub Qaid Al-Hamidi’s two daughters and husband were killed by shelling and sniper fire from the Houthi-Saleh militias in Taiz in 2015. She asks herself: “This war that killed my family, what is it for? Why all this death and destruction? What are they fighting over? What is worth all this death?”[4]

Meanwhile, Mohammed Ahmad Daghmoush, a fishmonger whose brother was killed in Al-Hudayda in 2017 by Saudi Apache helicopters, puts the following questions: “What did we ever do to them? We’re civilians, why do they want us dead?”[5] Hashim Mohammed Thabet Hajib Al-Qudsi, who lost his wife and two children in a Saudi-led coalition’s bombing in Taiz in 2015, tells Al-Maqtari: “What did they do to deserve it? They weren’t armed or sided with any part of the war; they were civilians.”[6]

In fact, one of the common threads in the multiple testimonies collected in the book is how the victims’ feelings of relative security, driven by the knowledge that as civilians they have no active part in the war, are soon followed by the realization that their civilian status actually has little importance. Being a civilian is no guarantee when war hardly discriminates between non-combatants and fighters.

In a 2015 op-ed for The New York Times, Al-Maqtari denounced the Saudi-led intervention in Yemen while expressing her opposition to “the Houthis’ coup and their vengeful campaign against Yemenis in the north and the south.”[7] In a more recent interview with Deutsche Welle, Al-Maqtari expressed her disappointment about the fact that a majority of Yemeni writers and journalists have “turned into a whip in the hands of the politicians after we saw them as a lifeline.”[8]

The author of What Have You Left Behind? rejects any partisan position and takes a different, high-minded stand, that visibly permeates her work. Al-Maqtari’s chief concern is documenting the suffering of Yemeni civilians, not apportioning blame to the different actors that have subsumed Yemen in a conflict with no clear end in sight. War is paradoxically made by humans and yet seems nothing but inhumane. However, this ambivalence does not apply to war’s victims, whose humanity is stressed once and again in the multiple testimonies brilliantly documented in What Have You Left Behind?.