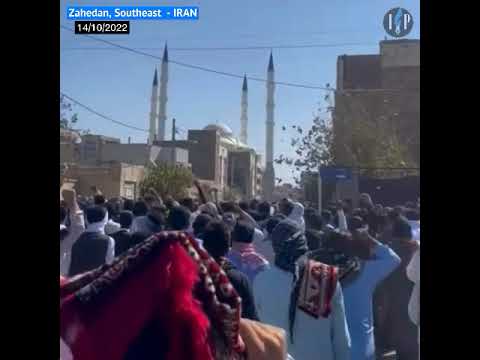 ( Middle East Monitor ) – A month after a brutal massacre, protests continue in Iran’s restive region of Balochistan, home to the Baloch-Sunni ethno-religious minority. Six more people, including three children, were reported to have been killed on Friday as Iranian security forces opened fire on the demonstrators in Zahedan, the capital of the south-eastern Sistan-and-Balochistan province. Earlier, security forces had killed at least 82 people in the city; 66 of them lost their lives in a single incident on 30 September, now known widely as “Bloody Friday”.

The people had gathered outside a police station in Zahedan on that fateful day to demand accountability for the reported rape of a 15-year-old girl by an Iranian police commander in Chabahar area of the province. Frustrated by days of nationwide protests sparked by the death of Mahsa Amini in custody after being arrested by the country’s morality police, and emboldened by the orders of their commanders to ‘mercilessly confront’ the protesters, the security forces considered it opportune to demonstrate their power by using live ammunition against the unarmed Baloch protesters.

According to rights groups, more than 90 people were killed and hundreds of others were injured or arrested during this brutal incident. Amnesty International has confirmed the massacre of at least 82 people, including children, in Zahedan. According to reports, most of those killed were shot in the head or torso, indicating the use of snipers and the intent to kill. This has also been confirmed by Maulana Abdul Hamid, an influential local leader, and by a neurosurgeon in Zahedan.

The incident was reminiscent of another bloody day at the same location in 1994, when security forces attacked the demonstrators who had gathered outside the Makki Mosque in Zahedan to protest against the government’s demolition of the Sunni Shaikh Fayz Mosque in the city of Mashhad, in the Khorasan province. Dozens of people were killed and injured. Very little has changed for minorities in Iran over the decades since.

As usual, Tehran has described the ongoing protests as a foreign plot against Iran. However, it fails to say if the heinous incidents — the death of one girl and rape of another in police custody — that led to the ongoing wave of protests were perpetrated by foreign agents. Were the police operating under the command of foreign powers? Were the Iranian security forces who are fuelling the fire by killing protesters doing so by order of foreign handlers? It has been the policy of the clerical regime in Tehran to label any action it dislikes as being part of a “foreign agenda” and “enmity against God”. In the same way, the government deliberately conflates its brutal crackdown on Baloch activists with operations against drug trafficking in the border region.

The Baloch people have suffered discrimination, repression and marginalisation for many years under successive Iranian regimes. Sistan-and-Balochistan is the second largest but least developed and most deprived province of Iran. In the east, the province borders the contiguous Baloch regions of Afghanistan and Pakistan. During the late 19th century (1871-96), this part of Balochistan was split from the Baloch Khanate of Kalat by the British, who divided the country into British and Persian “spheres of influence”. However, Persia failed to establish its control over the area, and it continued to be ruled by local Baloch chiefdoms until its annexation by Persia in 1928 after a brutal military campaign. Since then, this region has remained in conflict with the Persian-Shia dominated centre.

The conflict between Persia and Baloch is not a new phenomenon, but a centuries old struggle between the former’s desire for hegemony and the defiance of the latter. It can be gauged by the desire of the Sassanid Emperor Khusrow I, as narrated in the legend of Shahnameh, to wipe the Baloch from the face of earth.

Similarly, the erstwhile Pahlavi monarchy and the incumbent Shia-Persian theocracy have both been blamed for systematic exploitation and persecution of minorities in Iran. The Balochistan region has been oppressed by both regimes. Their ethno-religious assimilationist policies have led to continuous conflict between the region and the centre. Both regimes, determined to achieve the assimilation of Baloch into a greater Iranian national identity, have followed a comprehensive Persianisation policy in Balochistan. Pahlavi rulers banned the use of the Balochi language in schools and government offices. The publication and possession of Balochi literature were declared criminal offences. Even now, the use of the Balochi language is discouraged in official and public spheres, with undeclared curbs on the language and literature.

Over decades, through a series of divisions, Baloch areas were made part of other provinces adjacent to Balochistan. Historic names of various cities and towns have been replaced with Persian names. Baloch people are forced to adopt Persian names. The name of Balochistan itself was first changed to Balochistan-and-Sistan, and then to Sistan-and-Balochistan. There exists genuine apprehension about Tehran’s plans to drop Balochistan from the name entirely and split the region into several smaller provinces. Iran is also attempting to carry out demographic change in the region, all to weaken and dilute the Baloch identity.

The Iranian regime refuses to grant equality of cultural, political and economic rights to all; such demands are termed as antireligious and counterrevolutionary. Activism and campaigning on these lines results in detention, and charges of “enmity against God”. The government does not allow any kind of political or press freedom in Balochistan. The cases of the bloggers Yaqub Mehrnahad and Sakhi Righi are shocking examples of this: the former was hanged for his activism, while the latter was sentenced to 20 years in prison. Reports by international rights groups suggest that the Baloch suffer disproportionately from government atrocities. They make up around five per cent of Iran’s population, but account for a disproportionate percentage of the number of executions, at least 26 per cent during 2022, an 19 per cent last year.

Bloody Friday in Zahedan is exemplary of the general attitude of the Iranian state towards the Baloch and what it means to be a minority in Iran. The situation in Balochistan and the ongoing wave of countrywide protests should be a moment of self-accountability for the regime. It should reconcile with the people and give up the desire of depriving the masses of their basic rights and forcing the assimilation of nationalities by suppressing their voices in this age of information.

Samand Muhammad-Shahi is a researcher based in Balochistan. He holds an MPhil in Government and Public Policy.

This work by Middle East Monitor is licensed under a Creative Commons Attribution-NonCommercial-ShareAlike 4.0 International License. If the image(s) bear our credit, this license also applies to them. Creative Commons License.