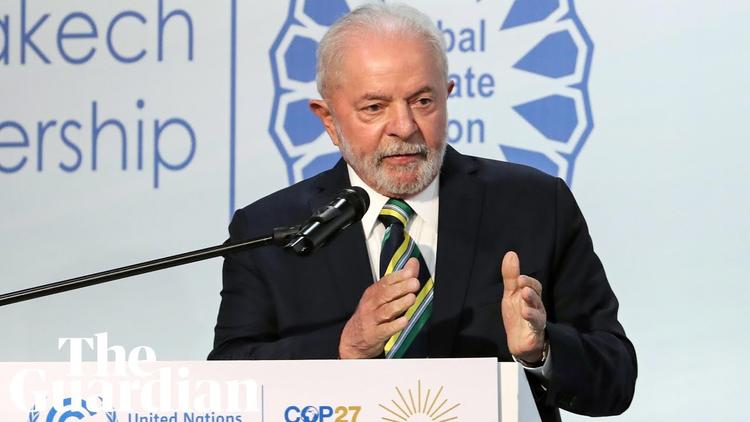 Ann Arbor (Informed Comment) – The president-elect of Brazil, Luiz Inácio Lula Da Silva, addressed the COP27 climate summit in Egypt on Wednesday, announcing that “Brazil is back.” He said, “Ladies and gentlemen, I am here today to say that Brazil is ready to join again in efforts to build a healthier planet, a fairer world, capable of welcoming with dignity the totality of its inhabitants – and not just a privileged minority.” Lula’s predecessor, the far right crank Jair Bolsonaro, had canceled a planned COP climate summit in Brazil itself, and did whatever he could to destroy the Amazon rainforest and thereby to remove a major carbon sink that is helping the planet avoid an even worse climate emergency.

In his speech, Lula recognized that the conference’s invitation to him to speak even before his inauguration was an “acknowledgment that the world is in a hurry to see Brazil participating again in discussions about the future of the planet and all the beings that inhabit it — the planet that always warns us that we need each other to survive — that alone we are vulnerable to the climate tragedy.”

Lula’s life has been one of fighting for the collective good, whereas Bolsonaro had been about individual greed and selfishness, and the devil take the hindmost.

The president-elect of the world’s ninth-largest economy by nominal GDP lamented, “We spend trillions of dollars on wars that only bring destruction and death, while 900 million people around the world have nothing to eat. We are living in a time of multiple crises – growing geopolitical tensions, the return of the risk of nuclear war, food and energy supply crisis, erosion of biodiversity, intolerable increase in inequality.”

He said that what was needed to reverse the acceleration of global heating was better “leadership,” in achieving the goals set in climate agreements already concluded. He pointed out that the world’s poorer nations need help from the wealthy ones in addressing climate change, and noted that the wealthy nations were primarily responsible for the planet’s surfeit of CO2, but the poorer nations are most vulnerable to the resulting climate disruptions.

Some environmentalists have urged the countries with advanced economies to simply pay Brazil to maintain and restore the Amazon rainforest for its carbon-absorbing role (20% of this capacity has been lost in the past 50 years). Now would be the time to follow through on such a plan, which Lula is signalling he would welcome.

Lula lauded the recent election in Brazil, won by the Left, on the grounds that it would “help contain the advance of the authoritarian and undemocratic extreme right and of climate denialism in the world.” He added, “And also because not only the peace and well-being of the Brazilian people, but also the survival of the Amazon and, therefore, of our planet all depended on the results of the election in Brazil.”

Lula correctly links authoritarianism and the far Right to climate denialism, and ties his social democratic Workers Party to democracy, social peace, and climate activism. This entwining of environmentalism with the traditional Leftist emphasis on workers’ well-being marks an interesting ideological development that other social democratic thinkers should attend to. After all, workers’ lives cannot improve if their living conditions are degraded by mega-storms, floods, sea-level rise and drought.

Lula pointed to his own past record of achievement on the Amazon issue, saying, “Brazil has already shown the world the way to defeat deforestation and global warming. Between 2004 and 2012, we reduced the devastation rate of the Amazon by 83%, while the agricultural GDP grew 75%.”

I wrote at the end of 2020 about what happened after Lula left the presidency:

“The Amazon rainforest continues to burn down, another effect of global heating caused by humans driving gasoline cars and burning coal and gas for heating and electricity. The far right Bolsonaro government is also actively encouraging the clearing of the forest for agriculture and cattle ranching. The BBC reported deforestation surging to a 12-year high. A total of 11,088 sq km (4,281 sq miles) of rainforest were destroyed from August 2019 to July 2020. Brazilian scientists have discovered that some non-rainforest forests (deciduous etc.) in Minas Gerais state have become net emitters of carbon dioxide instead of being carbon sinks. This ultimately could happen to the Amazon rainforest. This development would be an enormous catastrophe for each of us. The Amazon rainforest absorbs 2 billion tons of carbon dioxide every year. That is five percent of all annual CO2 emissions around the world.”

Lula also slammed the recent years of Bolsonaro’s right-wing dominance of Brazilian politics: “Unfortunately, since 2019, Brazil has faced a government that was disastrous in every way – regarding the fight against unemployment and inequality, regarding the fight against poverty and hunger — and in its disregard for a pandemic that killed 700,000 Brazilians, in its disrespect for human rights, in its foreign policy that isolated the country from the rest of the world, and also in its devastation of the environment.”

He pledged that his Brazil would cooperate with the developing countries, in Africa, Latin America and the Caribbean, with investments and technology transfer.

He pledged to reunite Brazil itself, the world’s 7th largest country by population, after what he characterized as profound polarization provoked by “fake news and hate speech.”

He also, however, wanted to reform global governance, seeking a seat on the UN Security Council and an end to the Great-Power veto on that body.

Lula is aware of the extreme importance of the Amazon rain forest as a carbon sink for the whole world. He observed, “Ladies and gentlemen, there is no climate security for the world without a protected Amazon. We will not spare any effort to achieve zero deforestation and degradation of our ecosystems (biomas) by 2030, in the same way that more than 130 countries committed themselves by signing the Glasgow Declaration of Leaders on Forests.”

He continued, “For this reason, I want to take advantage of this Conference to announce that the fight against climate change will have the highest profile in my government. Let us prioritize the fight against deforestation in all our biomes. In the first three years of the current government, deforestation in the Amazon increased by 73%. In 2021 alone, 13,000 square kilometers were deforested. This devastation will be in the past. Environmental crimes, which grew in a frightening way during the government that is coming to an end, will now be fought without a truce.”

Lula’s pledges should be music to the world’s ears. But note that Bolsonaro’s political allies are powerful in the parliament still, and the new president could be blocked in some of his hoped-for initiatives. If the advanced economies want the benefit of the Amazon rain forest in the fight against the climate emergency, they need to support Lula’s new government with substantial monetary grants and investments.