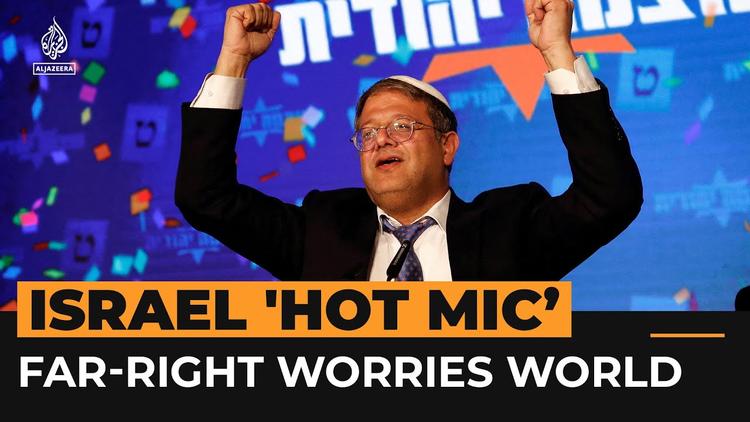 ( Middle East Monitor ) – As Benjamin Netanyahu, the head of the largest right-wing Israeli party Likud, is going to form the most right-wing government the country has ever had, expectations are rising that he will give influential ministerial portfolios to far right Ministers Itamar Ben-Gvir and Bezalel Smotrich.

Prior to his victory and during his electoral campaign, Ben-Gvir told his supporters that he was eyeing the ministry of public security, which oversees internal security, including the security of prisons, where Palestinian resistance fighters are serving long sentences in inhumane conditions.

Now, according to the Israeli media, he is seeking to get become minister of education and give his ally, the extremist Smotrich, the ministry of defence. If this happens, Amos Harel of Haaretz said, it “will have significant impact on the ground.” Harel, who is a leading Israeli reporter and analyst of military and security issues, stated that Smotrich “will be an integral part of the next Netanyahu government.”

While these two extremist far-right Israeli Jewish politicians are becoming senior officials with extremist and racist goals at the top of their agenda, who will be able to deal with them, deter their racist ambitions or rein in their madness.

In an article published in Israel Hayom, Ben -Gvir attempted to lower his extremist tone. He compared his past and current views and explained how he changed, but in the same article he wrote: “I don’t plan to apologise for who I am, but I think that if you get to know me, you will change your views about me and my positions. For too long too many Israelis have been afraid of enemies from within and without. No more!”

During his electoral campaign, Ben-Gvir said he would seek to ease the Israeli occupation army’s rules of engagement to allow Israeli soldiers “to more easily shoot-to-kill Palestinian suspects,” the Times of Israel reported, adding that Smotrich has campaigned for the same thing.

As he was leaving the Office if the Prime Minister, Yair Lapid – who lost the post in the election – lamented the defeat of the left-wing parties in Israel, saying: “After a loss in the elections there is always fallout, there is always anger. It’s human and understandable, but we have a much more important mission. We must join forces in the fight for our beloved country. In the Knesset, in the streets, in all possible arenas.”

Lapid knows very well how such far right religious politicians are harming the country’s governability as well as public relations in the international arenas. So he has already started to mobilise power, seeking allies to form a strong united opposition aimed at restoring the power of the left.

In an event held in memory of late extremist US-born Rabbi Meir Kahane, whose extremist followers have attacked and sometimes killed both Israelis and Arabs, Ben-Gvir hailed the controversial figure whose organisation has been labelled terrorists by the US, and defended his views as he insisted that “ultimately Rabbi Kahane was about love. Love for Israel without compromise, without any other consideration.”

Speaking at the same event, another far right Israeli Jewish activist, Baruch Marzel, who was a former political partner of Ben-Gvir, said: “Nothing will stop unless we drain the swamp,” reinforcing a previous call to expel the over 300,000 Palestinian citizen of Israel who voted for the Balad and Ra’am parties in last week’s election.

During the meeting with Israeli President Issac Herzog, Ben-Gvir said he was certain that “if I speak with the world, they will realise and acknowledge that I don’t make generalisations against all Arabs.” He was also reported by Israeli media saying that he had “started to meet with diplomats and will work to explain the positions of Otzma Yehudit around the world,” in reference to his political party.

If Ben-Gvir is handed the Ministry of Public Security, he will have control over law enforcement on Al-Aqsa Mosque, where extremist Israeli settlers and officials, including him, have been seeking a change to the status quo at the expense of Muslim rights.

Ben -Gvir has frequently desecrated Al-Aqsa Mosque along with his supporters and carried out Jewish rituals, which are banned by the Israeli law. He has a long history of inciting violence and seeking the deportation of Palestinians from their homes in the Palestinian neighbourhoods in the vicinities of the Muslim holy site.

Who will deter him and stop his madness when he becomes a senior government official with immense power? Who will stop him ordering Israeli police to shoot to kill Palestinians?