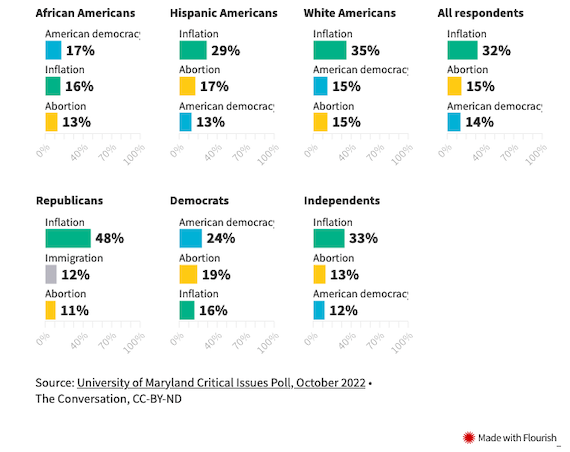 The 2022 midterm elections, perhaps more than most in recent American history, present voters with a multitude of pressing issues to consider as they prepare to vote. These issues range from abortion to rising inflation, energy costs to the state of American democracy.

Given the attention to domestic issues, it’s surprising, then, that a foreign policy issue also ranked among the top – U.S. aid to Ukraine – as our latest University of Maryland Critical Issues Poll showed.

Partisanship often overshadows specific issues and, while Americans are not electing a president in 2022, some perceive the midterms nonetheless as referendums on President Joe Biden or former President Donald Trump.

As midterm elections near, the poll we conducted Oct. 7-10, 2022, explores how potential voters rank these issues and offers insights into the effects they have on the American populace.

Not surprisingly, the ranking of issues important to potential voters varies by race and ethnicity.

When asked to rank the importance of issues from among a list that we provided, 17% of African Americans ranked American democracy first, 16% ranked inflation first and 13% ranked abortion first.

In short, while Latino and white Americans both have the economy at the top of their minds, African Americans are slightly more focused on the state of democracy, regardless of political affiliation.

Partisanship is a key prism

The ranking of these issues varies depending on partisan affiliation: 48% of Republican respondents ranked inflation as their first issue priority, 12% ranked immigration first, 11% ranked abortion first and 7% ranked democracy as the top issue.

In contrast, 24% of Democrats ranked democracy at the top, 19% ranked abortion as first, 16% ranked inflation first and 10% ranked climate change as a priority.

Though crime has been highlighted by GOP politicians as a key issue for the midterm elections, just 6% of Republicans ranked crime as their first priority.

At the same time, 5% of Democrats and 5% of independents ranked crime as a top priority.

Our findings on where Republicans rank abortion are particularly telling.

When the U.S. Supreme Court reversed Roe v. Wade on June 24, 2022, there was much speculation that the issue of abortion would mobilize both Democrats and Republicans.

Polling – and voting such as in Kansas – shows this issue has mobilized supporters of abortion rights more than those on the anti-abortion side.

It is tempting to dismiss foreign policy as an issue for midterm voters. After all, foreign policy generally lags in importance to voters, behind domestic issues.

But our poll finds that dismissal of foreign policy as an important issue for the 2022 midterm elections would be a mistake.

As we noted previously, inflation ranks as the top issue overall.

In other words, the American public’s support for Ukraine is strong enough that they are willing to tolerate some pain when it comes to the effects of inflation.

Our poll also revealed whether likely voters see the 2022 midterms as a referendum on Biden or Trump.

Only 2 in 10 respondents, or 21%, said that the midterms are a referendum on Biden. Of those respondents, 28% identify as Republican, 19% as independent and 16% as Democrat.

Similarly, only 16% of likely voters said that the midterms are a referendum on Trump.

Of those, 18% were Democrats, 15% were independents and 17% were Republicans.

Every election season brings forth questions about which issues are at the top of voters’ minds.

What seems different about the 2022 midterms are the concerns about economic struggles in the wake of the COVID-19 pandemic, the precarious state of U.S. democracy and the overturning of the constitutional protection of women’s right to abortion.

In an election cycle that is expected to have record turnout, these issues appear to be driving many voters to the polls. How they are weighed in the voting booth will go a long way in determining the future of America.