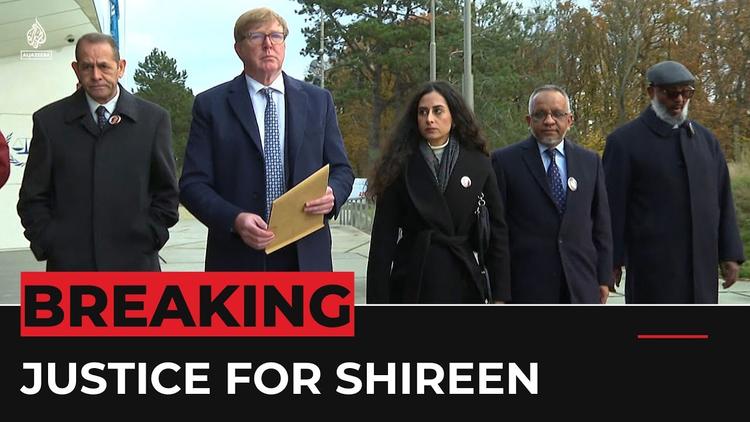 Ann Arbor (Informed Comment) – The Qatar-based satellite news channel Al Jazeera has referred the case of one of its slain reporters, Shireen Abu Akleh –an American citizen — to the International Criminal Court in the Hague. Ms. Abu Akleh, who had reported from Israel and Palestine for over twenty years for Al Jazeera, was shot in the head just under her helmet on May 11 last spring by an Israeli sniper even though she was wearing a vest clearly marked “Press” and had identified herself to the nearby Israeli army unit.

Ms. Abu Akleh’s killing has become a cause célèbre in the Arab and Muslim worlds. At the soccer World Cup on Tuesday, when Morocco beat Spain, Moroccan fans in the stands in Doha, Qatar, held up Palestinian flags and posters of Shireen Abu Akleh. The victorious Moroccan team also unfurled a Palestinian flag to celebrate their win. FIFA, the governing authority of the games, had banned such displays and threatened expulsion from the games.

The US hypocrisy is glaring, since Washington has urged the International Criminal Court to try Russia over its invasion of Ukraine. This step is hypocritical because the US refuses to sign the Rome Statute itself and has tried to bully the ICC into dropping an investigation of US soldiers serving in Afghanistan, not to mention that Washington never ever wants any Israeli officials tried for war crimes.

Israeli cabinet minister Avigdor Lieberman responded by saying that Al Jazeera’s press credentials should be revoked. The far-right extremist Itamar Ben-Gvir demanded that Al Jazeera simply be expelled from Israeli-held territory. So much for democracy.

The Al Frazer network said in a press release that this step comes after its legal research team discovered new evidence demonstrating that Abu Akleh and her five colleagues — all reporting for Al Jazeera from Jenin in the Palestinian West Bank — were targeted by direct fire from the Israeli army, and that the Israeli claim that she was accidentally shot during an exchange of fire with militants in the area is baseless. The network alleges that the killing of Abu Akleh was premeditated and was among a number of punitive stps taken by the Israeli government to silence the satellite channel.

The U.S. Department of Justice has instructed the Federal Bureau of Investigation to open an inquiry into Ms. Abu Akleh’s killing, a move that the Israeli government has roundly denounced. Since she was an American citizen, it seems the least Washington could do, but the move appears to have been opposed by the State Department.

The Israeli authorities have declined to launch their own inquiry into the sniper who killed Shireen, saying that the killing was inadvertent and that the sniper is innocent. Since Israeli military inquiries into actions taken in the Palestinian West Bank almost always produce a whitewash, I suppose they saved themselves some time and money by skipping the investigation and going straight to the “innocent” verdict.

Shireen’s niece, Lina Abu Akleh, pointed out that Israel has a history of targeting journalists to silence them from uttering the truth, and had nevertheless managed to avoid ever being held accountable. She said that now is the time to hold Israel accountable.

The judges of the International Criminal Court function under the Rome Statute (1998-2002), which has been signed by 123 countries. The Statute incorporates several international law instruments, including the 1949 Fourth Geneva Convention on the treatment of persons in Occupied territories. The ICC does not judge countries but rather individuals who have responsibility for violating human rights. Some of those tried int he past twenty years have been deposed African dictators. The ICC ordinarily only has jurisdiction in countries that have signed the Rome Statute. The Palestine Authority sought and gained non-state observer status at the UN, which allowed it to sign the Rome Statute. In the wake of that step, the ICC reviewed the situation and has concluded that it has jurisdiction in occupied Palestine because the Palestine Authority is the recognized authority in these territories
The ICC is studying potential war crimes committed in the Palestinian territories, both by the Israeli military and by the fundamentalist Hamas Party of Gaza.

It is not clear whether the judges at the ICC will take the case.