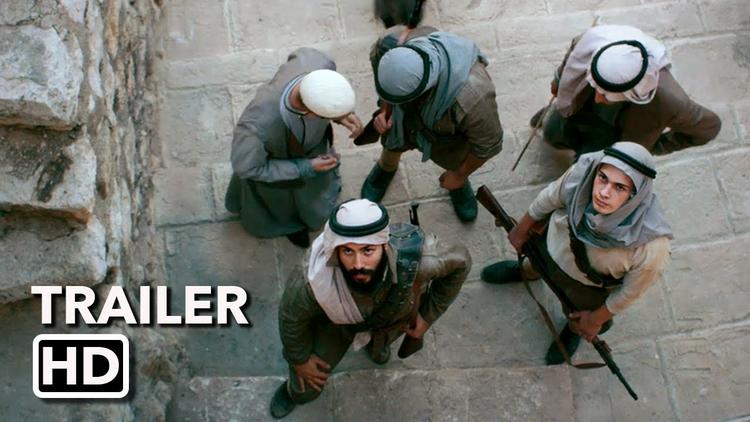 ( Middle East Monitor) – On 1 December, Netflix began streaming Farha (2021) worldwide, despite immense pressure directed at the platform to prevent its debut. The film is director Darin J. Sallam’s first full-length feature and chronicles the coming-of-age story of its heroine, Farha, a 14-year-old Palestinian teenager who possesses a voracious appetite for books and learning. Farha’s cultural background is that of a villager – her Arabic dialect infused with the authenticity often associated with Palestinian grandparents, particularly the generation born in the decade just before or that of the Nakba itself. Yet, what makes Farha a distinguished heroine isn’t necessarily her linguistic veracity, it is her bravery and her desire to pursue her education at a school in the neighbouring city. At the start of the film, she is seen at one with the land, collecting water from the local spring, eating figs straight from the communal trees and collecting almonds in her satchel, still intact and unpeeled. She goes through the motions of her chores in the village, but her mind often wanders into the literary worlds of the books she reads, novels gifted to her by her best friend Fareeda, who is from a city-dwelling family not far from the village from which Farha hails.

The first scenes of the film show Farha as a dreamer, a girl who urges her father, a man of mayoral standing, to register her in the city’s school. Her father is hesitant as he believes her economic livelihood is best secured through the arrangement of marriage and that the local Quran recitation learning groups provided by the Sheikh are a sufficient education. Still, Farha fights for her desire to learn and secures the support of many an ally in her extended family and community to finally convince her father. On the eve of the Nakba, he signs her enrolment certificate. Throughout the film, there are peripheral present-absent signifiers of just how troubling the situation in Palestine has become. Talk of resistance tactics and meetings between rebels and the officials hint that the historical events of the Nakba and its tragedy are on the cusp of eruption. These more politicised characters weave in and out of frames of the film, infiltrating the scenes with reminders, only to give way to Farha’s experience, which remains at the centre. Slowly but surely, the viewer’s understanding expands organically with Farha’s, and we see that this curious girl, who had very little understanding of the depth of this dire situation, is forced to contend with its brutality as a witness and as a survivor of violence, loss and dispossession. In fact, Farha’s father hides her in a closet where she remains trapped throughout the most violent moments that befall her village, and she is left alone to deal with the aftermath.

The film was produced by TaleBox, a production company co-founded by Sallam and producer Deema Azar. Ayah Jardaneh also served as the producer of the film. The film likewise received support from Laika Film & Television, Chimney, The Jordan Film Fund – Royal Film Commission, the Swedish Film Institute and the Red Sea Film Fund (an initiative of the Red Sea Film Festival). It remains a largely Jordanian-based initiative, highlighting the lived experience of Palestine and Palestinians, with support from European-based organisations. On a political level, Farha has depicted the tragedy of the Nakba for the first time through film and employs what the late Palestinian American scholar, Edward Said, has called the “permission to narrate” the Palestinian experience against many odds.

In response to the 1982 Israeli invasion of Lebanon and its aftermath, Said penned “Permission to Narrate” for the Journal of Palestine Studies in 1984. In it, he notes: “A disciplinary communications apparatus exists in the West both for overlooking most of the basic things that might present Israel in a bad light and for punishing those who try to tell the truth.” In short, Said’s argument can be summed up as such: despite declassified archives, countless human rights reports, international organisation inquiries and both official and ethnographic accounts of Palestinian plight and dispossession from Nakba to diaspora and from Nakba to military occupation, the Palestinians have been denied the right to narrate their own stories. They have also been denied the privilege of seeing their experience reflected back at them through film and literature and, by extension, preventing them from experiencing the catharsis that comes with artistic acknowledgement and representation. Farha has granted the Palestinian diaspora permission to narrate this story on one of the world’s largest entertainment streaming platforms. More importantly, Farha’s story has been recounted, in numerous iterations and manifestations, 700,000 times by the first generation of the dispossessed. The trauma of that memory remains forever fixed in the minds of the descendants of those who were forcibly displaced – a global diasporic population of nearly six million people and counting – approximately half of the total population of 12 million Palestinians across the historical homeland and outside of it. This population has been classified by the international community, despite its many failures towards it, as ipso facto stateless.

While on the one hand, Farha has been hailed by many viewers as an incredible feat, it comes as no surprise that the film has been targeted by Israeli officials and has caused outrage. Israel’s Finance Minister Avigdor Lieberman issued a statement condemning Netflix, stating his belief that: “It’s crazy that Netflix decided to stream a movie whose whole purpose is to create a false pretence and cite against Israeli soldiers.” Though Farha has been screened globally in many film festivals and series since its debut in 2021, at venues such as Dubai-based Cinema Akil and intentional film festivals, including the Toronto Film Festival, the Red Sea Film Festival and others, it is its recent reincarnation on Netflix and its screening at Saraya, a theatre in Jaffa that has caused the most outrage towards the film. The Israeli government has threatened to act against Saraya and has encouraged a mass exodus of subscribers to Netflix. While many regional and international news networks hail the film for its artistic and historical merits, there is also a cacophony of discordant opinions about it, with publications like Fox News and The Times of Israel labelling the film as “terrible” or as “lies and libels”, whilst other major publishers such as The New York Times tiptoe around the film’s representations, selecting its words carefully to maintain its readership. Sites such as IMDb and Rotten Tomatoes have seen an onslaught of divided reviews: either five-star glowing recommendations from the film’s supporters or comments of rage and disbelief from its detractors.

In all the opinions emerging in the now global conversation surrounding this film, there has been no mention of Sallam’s other smaller work, The Parrot, a 2016 short film she co-directed with Amjad Al-Rasheed. In eighteen powerful minutes, The Parrot follows the story of a Tunisian Jewish family who arrives in Haifa and takes up residence in a home belonging to a Palestinian Greek-Orthodox family. Their clothing, blue-tinted walls and Christian iconography, which borrow heavily from the aesthetic and colour-scape of local churches, are left behind by the displaced family. The breakfast and tea on the table are still hot, and the new occupants, played by Tunisian actress Hend Sabry as Rachel and Palestinian citizen of Israel Ashraf Barhom as Mousa, are haunted by the spectre of the family that once lived there and by the constant echoes of the parrot that was left behind and calls out after the Palestinian boy who owned him asking for a kiss. The parrot also repeats “where are you?” and “why are you looking at me like that” incessantly.

Yet, for viewers who are unaware of the Nakba, this imagery and the story of Palestinian displacement remain subliminal. Instead, what takes centre stage is the othering of Eastern Jews who find themselves in Euro-Israeli modernity, one that they can’t quite figure out. As such, by the end of the short film, many viewers would engage in a conversation about the depiction of an intense encounter between the Tunisian Jewish family and their Ashkenazi neighbours, who look at the architecture and structure of the house in Haifa with envy, bewildered at how Eastern Jews, othered and orientalised, had acquired such luck. The film is as much a critique of ethnic relations among Israelis as it is about the Palestinian exodus, and, like Farha, it tells a tragic tale through beautifully directed cinematography and crafted set and costume designs. The pleasing nature of Sallam’s use of pastels, verdure and white stone almost works as an antidote to the harsh emotional blow to the nerves that her cinematic tales have delivered thus far and will continue to do in the future.