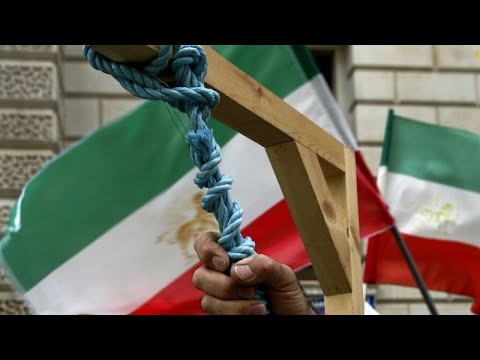 Human Rights Watch – (Beirut) – Iranian authorities’ execution of two men in connection with widespread antigovernment protests is a gross miscarriage of justice and a dangerous escalation, Human Rights Watch said today. According to human rights groups, revolutionary courts of first instance have issued at least 11 other protest-related death sentences and are expected to try dozens more people, including children, for charges that can carry the death penalty.

The charges against the protesters have included vaguely defined national security charges such as enmity against God (Moharebeh), corruption on earth (Ifsad fil arz), and armed rebellion (baghi). All of the vaguely worded crimes are capital offenses. The rushed trial proceedings, in which defendants are apparently prevented from having a lawyer of their choice, appear to fall grossly short of international standards.

“The trials of those who are facing capital charges related to protests have been a total travesty of justice,” said Tara Sepehri Far, senior Iran researcher at Human Rights Watch. “The defendants are reportedly tortured into confessing, deprived of access to lawyers of their choosing, and rushed through trial proceedings that bypass safeguards in Iran’s own penal code and criminal procedure law.”

On December 12, Mizan News, the judiciary news agency, reported that authorities in Mashhad had executed in public 23-year-old Majid Reza Rahnavard after he was found guilty of enmity against God for the alleged killing of Danial Rezazadeh and Hossein Zeinalzadeh, two security officers, and injuring four others on November 17. Human Rights Activist News Agency (HRANA) said that Rahnavard did not have access to a lawyer of his choosing and that his trial opened 10 days after his arrest on November 19.

Rahnavard was executed only 13 days after the trial began, and it is unclear how the appeals process proceeded at such a pace. A video published by Islamic Republic News Agency (IRNA) shows Rahnavard with a broken arm in police custody in Semnan province, raising concerns about his treatment during his arrest and in detention.

On December 8, Mizan News, also reported that the authorities had executed 23-year-old Mohsen Shekari, who was sentenced to death for enmity against God for allegedly “using a weapon to spread terror and violate the public’s freedoms and security” and for injuring a police officer, blocking a road, and disrupting society’s order and safety on September 25.

Mizan News said that the verdict was issued on November 20 and was upheld by the Supreme Court. On November 20, IRNA news outlet published a video of Shekari in which a bruise is visible on his left cheek, raising concerns about his treatment in custody.

Several Iranian clerics and legal experts including Morteza Moghtadayi, the former head of the Supreme Court, have criticized the use of capital punishment for the enmity against God charge against Shekari, given that he was not charged with a killing.

The Volunteer Committee to Follow-Up on the Situation of Detainees has identified nine other people by name who have been sentenced to death.

In one case involving 16 defendants, five men accused of corruption on earth were sentenced to death by courts of first instance, according to the judiciary media center. The charges stem from events on November 3 in Karaj that resulted in the death of a Basij officer. The brother of one of the men, Hamid Ghareh Hasanlou, told Radio Farda that his brother was severely beaten during arrest and in detention. The father of Mohammad Mehdi Karimi, one of the other men sentenced to death, told Etemad Newspaper that the court did not allow his son to choose his own lawyer and that he has not been able to reach his court-appointed lawyer to provide additional evidence.

The Committee to Follow-Up on the Situation of the Detainees has identified two of the other men sentenced to death as Hossein Mohamadi, an actor, and Seyed Mohammad Hosseini. The 11 other defendants in the case, including three children, were given lengthy prison sentences.

Mohammad Ghobadlou, 22, who, according to medical documents published by BBC Persian, is bipolar, has also been sentenced to death for corruption on earth for allegedly killing a police officer and injuring others with his car. Amir Raeesian, appointed as his lawyer by his family, posted on Twitter that the judge prevented him from appearing in court.

Two other people, 23-year-old Mahan Sadrat and Mohammad Boroughani, were sentenced to death for allegedly injuring others and destroying public property. Mizan News reported that Boroughani was charged with setting fire to the governor’s building in Pakdasht and attacking an official on duty with a knife.

Two others, Sahand Nourmohammadzadeh and Manouchehr Mehmannavaz, appear to have been sentenced to death for destroying property and blocking traffic. On November 7, Mizan News reported that Nourmohammadzadeh was on trial in Tehran for “enmity against God” for “destruction and arson of public property with the aim of causing disruption to the country’s peace and order and confronting the Islamic government.” The authorities also accuse him of blocking a highway and setting fire to trash cans and tires. On December 11, his court-appointed lawyer told Shargh Daily paper that his case is currently on appeal before the Supreme Court.

On December 12, Amnesty International tweeted that a Revolutionary Court has sentenced Mehmanavaz to death on the charge of “enmity against God,” two weeks after his trial began on October 29. On October 29, Tasnim News Agency reported that Branch 28 of Tehran’s Revolutionary Court had charged Mehmannanaz with “Mohrehebeh through intentionally setting on fire buildings with the intent to confront the Islamic state.”

Another man, Saman (Yasin) Seidi, was, according to his indictment, sentenced to death for shooting a gun in the air and “gathering and colluding to commit crimes against national security.” Mohammad Esmaeelbeigi, Seidi’s chosen lawyer told Shargh Daily that the authorities prevented him from accessing the case files and that they did not discover a pistol in Seidi’s belongings.

According to the Volunteer Committee to Follow-Up on the Situation of Detainees, at least 37 more people, including 4 children and 2 political activists have faced charges that can carry the death penalty. In at least three cases of those who have been sentenced to death, families or lawyers have reported that authorities have prevented defendants facing capital charges from having the lawyer of their choice represent them during the trials.

According to official statements, the authorities have issued at least 1,680 indictments across the country in connection with the protests. Human rights groups estimate that more than 18,000 people have been arrested during the protests.

On December 9, the Human Rights Activist News Agency said that since the beginning of the protests on November 16, the group has recorded the names of 479 people killed during the protests, including 68 children, and has verified the deaths of 251 people. State media have reported on the deaths of 61 members of security forces. Human Rights Watch has documented numerous instances of security forces’ use of excessive and lethal force against protesters across the country.

Human Rights Watch opposes the death penalty in all circumstances and in all countries because it is inherently cruel and irreversible. Iran is one of the countries that uses the death penalty most frequently. According to HRANA, the authorities executed 306 people between March 21 and September 12. Iranian authorities should immediately halt these trials and quash the death sentences, Human Rights Watch said.

“Depriving those who face capital charges from access to a lawyer of their choice is a coordinated move to rush the Iranian authorities’ campaign of sham trials that are intended to spread fear and project power,” Sepehri Far said.

12/12/2022: This version of the press release has been updated to reflect the correct spelling of Majid Reza Rahnavard’s name.