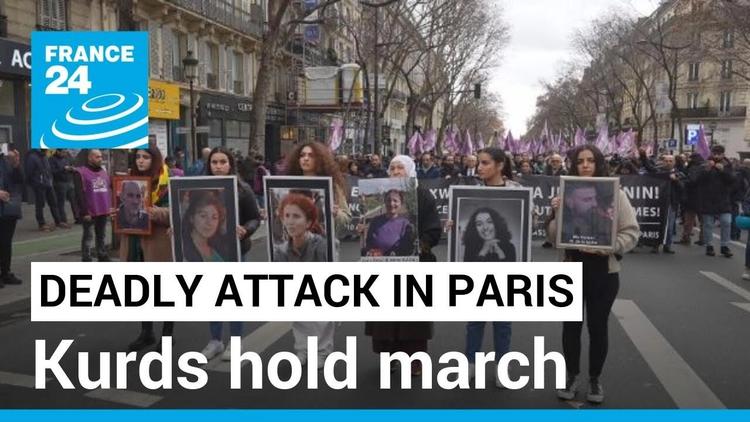 Ann Arbor (Informed Comment) – Last Thursday, one “William M.,” a retired French train conductor, went to the Kurdish Cultural center in the 10th Arondissement of Paris with a gun and shot six people, killing three and wounding three others, all Kurds. Some were in a hairdresser’s shop. So write Nathalie Birchem et Denis Peiron at LaCroix (alas, behind a paywall).

One of those murdered was Emine Kara, who led a Kurdish women’s movement in France and had been active in the fight against the ISIL terrorist organization. People subdued him and turned him over to the police when the latter arrived.

He is being investigated for “murder and attempted murder due to race, ethnicity, nation or religion” and for “unauthorized acquisition and possession of weapons” according to Anadolu. That is, he is being looked at for hate crimes and weapons possession offenses as well as murder.

William M. tried to excuse his actions by psychologizing them. He admitted to “a hatred of foreigners that had become pathological.” It is just violent hatred, William.

He characterized himself as “depressed” and “suicidal,” and so was released from custody on health grounds.

So get this: He said he wanted to kill some Kurds because the YPG in Syria that fought ISIL (Daesh) had taken the latter prisoner instead of just killing them.

Huh? The Syrian Kurdish fighters put quite a lot of ISIL fighters in the grave. In fact, they were the only armed group in the Middle East that President Obama could find who would take up arms against ISIL. They did also take prisoners. You aren’t allowed to kill them once they are POWs. That is a war crime.

French police said that an examination of his phone and computer did not turn up any evidence that William M. was part of a far right group. For that reason, the case will not be referred to counter-terrorism officials.

It seems pretty obvious that William M. is being treated with kid gloves by the French authorities and that if he were Muslim they wouldn’t be interested in whether he had psychological problems, and he would be in pre-trial detention.

As it is, Anadolu reported on Monday that the prosecutor is going to ask for pre-trial detention.

But further troubling evidence of kid gloves also emerged, according to Christophe Ayad at LeMonde. Last year, William M. went on a rampage with a sword, attacking people at a camp of migrants at Bercy Park at the 12th Arondissement in Paris.

Shouting “Death to migrants!” he chopped away at their tents and then started cutting people, slicing a man on his back and his behind, then he cut a minor and apparently some others, before he was subdued.

The police came and arrested him. But they also took 4 of the 5 injured victims in for questioning and kept them for 48 hours. The victims maintain they they were given no first aid while in detention, were not offered the services of a translator, and that their statements were never actually taken.

That time William M. really was put in pre-trial detention, but he was released on parole on December 12 of this year. His release was made conditional on his not possessing any weapons and on his agreement to seek psychiatric help.

Really, this case is like a real-life parody of my classic column, Top Ten differences between White Terrorists and Others.

There are several hundred thousand Kurds in France, which has an admirable tradition of offering political asylum to persecuted groups.