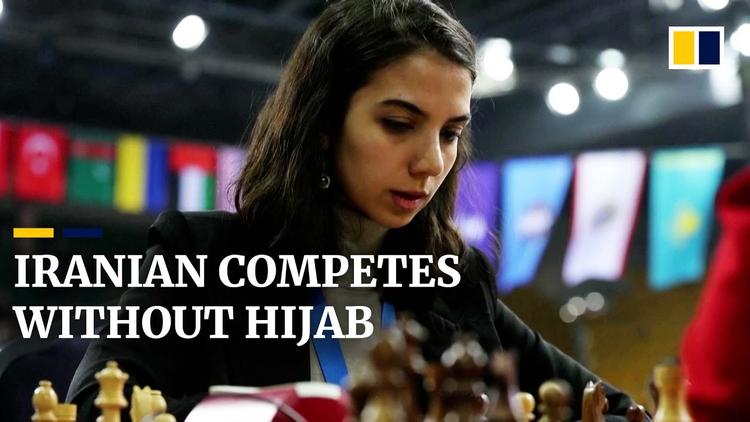 Ann Arbor (Informed Comment) – According to the official Iranian press, Ayatollah Ali Khamenei, the “August Leader” of Iran, met Wednesday with hundreds of professional women and spoke about the controversies wracking the country regarding veiling.

He stressed that the veiling of women is firmly part of Islamic law and there can be no retreat from the requirement. He went on to say, however, that women who do not fully comply with the law should not be accused of being irreligious or of being counter-revolutionaries.

Khamenei said that on a trip to one of the provinces he met with local clerics and discussed the issue of what they called bad-hijabi, bad-veiling, i.e.women letting some of their hair peak out beneath the veil. He said that the proper term for it is “weak veiling.” He went on to say that women who were guilty of it were the very ones who had come out to give him, Khamenei, a warm welcome. He added, “These are our own women and daughters who also participate in religious and revolutionary observances.”

He recalled a poorly veiled woman who was praying during the holy Night of Power, and weeping copiously, and said that he wished he could weep like that during prayer.

He emphasized that it is wrong not to veil or to weakly veil, but he said such a practice does not put the person outside the circle of the faith and the state. Khamenei has said things like this before, but not so clearly and not as seeming direction to the morals police and other security agencies.

In Islamic law, there is a ranking of deeds. Some are mandatory or wajib. Others are forbidden or haram. Yet others are preferred or mahbub, but not required. Then there is the category of actions that are disliked or makruh. “Disliked” actions don’t carry a punishment, they just attract disapproval. I don’t know if Khamenei accepts this schema, but it seems to me that he is trying to demote veiling from being required to being “preferred” or mahbub. as a matter of social practice, even though he maintains that in the abstract, strict law requires it.

If this is what he is saying, it could be a way of attempting to defuse the tensions that have boiled over on college campuses, at high schools, and in the streets since mid-September.

Personally, I don’t think the Qur’an requires women to wear a head covering, but then I’m just a historian, not an ayatollah.

Khamenei went on to praise the large number of women scientists and engineers produced by the Islamic Republic and to point out that there are more university undergraduate women than men. He contrasted this situation with the Pahlevi era of the last king or shah, when very few women had these attainments.

Khamenei isn’t wrong. Women’s literacy and education statistics are much higher now than in the 1960s and 1970s. More women now work outside the home than was the case then, as well.

He also spoke to them about the advantages for women of Islamic law. He said that women and men are equal in the Qur’an but that in Islamic law that have different, complementary functions. He said that in the current Iranian system women are not exploited the way they are in capitalist patriarchy. He said that the capitalists wanted to drag women from their homes and put them in factories for cheap labor.

That’s right, he denounced capitalist patriarchy. Iran is a country run by elderly clerics with no women in high office and no women in the judiciary and no women on the Guardianship Council. So you can’t really say it represents a critique of patriarchy. I suppose Khamenei is arguing that Iran’s system doesn’t exploit women for their appearance and doesn’t try to sell consumer goods by adorning them with objectified women in bikinis. It also doesn’t, he claims, exploit women for cheap labor. Except that lots of working class women have to work outside the home in Iran. Khamenei was making this argument about the Western exploitation of women in order implicitly to defend the practice of veiling and other restrictions on women in public.

Khamenei raised “Me too” sorts of issues, saying that women are routinely harassed and assaulted in the workplace in the West.

He also defended those women who prefer to stay at home as housewives, saying they play a key role in society and that this role does not prevent them from being activists in social and political causes, as well.

He doesn’t seem to get that even though women are a majority of university students, they are not being offered commensurate employment opportunities in Iran. Before COVID they were only 16% of the work force, and it is probably less now.