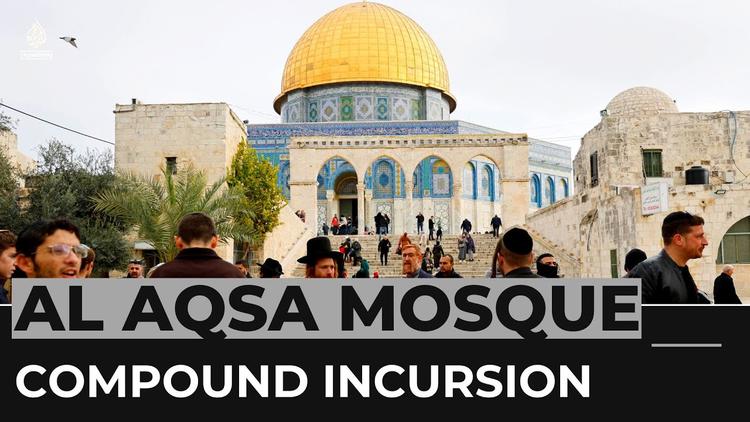 Ann Arbor (Informed Comment) – Far right wing extremist Itamar Ben-Gvir led a group of Israeli fanatics up to the al-Aqsa Mosque complex this week, in a clear sign that he will pressure the new Israeli government, in which he has an official post, to make the area a place of worship for Jews.

The move brought condemnation from the United Nations Security Council and even the usually docile US State Department blasted the Israelis. And, further, the foreign minister of the United Arab Emirates abruptly postponed Netanyahu’s visit to that country. The recognition of Israel by, Bahrain, the UAE, and Morocco via the “Abraham Accords” has been hailed by Israelis as a breakthrough even though most of those countries have never actually fought Israel. Netanyahu was reportedly shocked at the news of the cancellation of the visit.

Muslims under Israeli rule have seen this movie before. First Jews are given an adjoining worship space next to a Muslim shrine, then after a while Muslims are excluded from their own shrine because Jews want exclusive access to it, at least some of the time. Muslims are determined that the al-Aqsa mosque complex remain open for Muslim worship, as it has been for over 1400 years. It is the third holiest shrine in Islam, after Mecca and Medinah. Some 1.8 billion Muslims reverence it.

This would be like insisting that a synagogue be built into the Basilica of St. Peter in Rome.

The al-Aqsa Mosque complex is governed by a set of laws called the “Status Quo,” which also specify the privileges and treatment of the Christians who pray in the various shrines and churches in Jerusalem.

The Israeli government has long been pledged not to alter the status quo concerning religious sites in Jerusalem. Ben-Gvir and other fanatics are determined overturn it, which has major implications for the status of Christian sites as well.

Netanyahu is discovering that his plan for further expropriating Palestinians while being feted as a peacemaker in Arab capitals is wholly unrealistic.