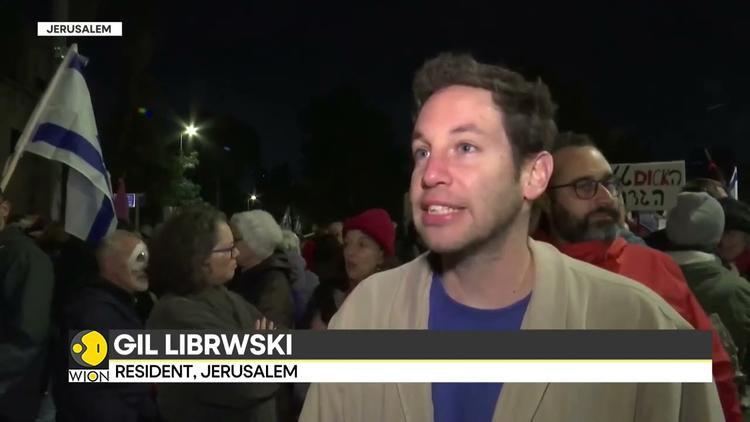 The Israeli center-right is finding out what Palestinians feel like, as the extremist, far-right government of Prime Minister Binyamin Netanyahu makes plans to ride roughshod over their rights and values with never so much as a ‘by your leave.’

Amad reports that the Hebrew press said that 80,000 protesters gathered in the central Habima Square in Tel Aviv against the government’s plan to deprive the judiciary of the right of reviewing legislation for constitutionality. Thousands more rallied in Haifa, Jerusalem and in front of the house of the Justice Minister Yariv Levin.

By 11 pm Israeli time the the police were saying 100,000 demonstrators had come out. The police then announced that they would block further protesters heading toward Habima because of the massive congestion in the area.

Major roads were closed off, but the organizers called on protesters to find alternative routes into the square.

At the same time, 1,500 demonstrators massed at a similar rally in Jerusalem.

Former Supreme Court Justice Ayala Procaccia said, “Something extremely deep has broken in our social contract, in the framework of the agreed-upon rules that have lasted for all these years of the state. We are at the beginning of a new era in which a new definition of democracy now exists. There is no value to democracy, but a fragmented democracy that depends entirely on the “will of the voter,” and which no longer gives any weight to other basic democratic values.”

She added, “As a liberal society we will never be able to bear the destruction of the basic values of our system. We will fight with every legal means available to us to halt the bewildering regression light years into the past … We are in a time of decisive testing regarding the future of the values of the state of Israel.” She said she and her movement will use every legal means to safeguard the value of their lives in this country so that they would be able to have a country that was not only powerful and smart but also excellent and beautiful.

Participants in the rallies hoisted the Israeli flag and placards criticizing the policies of the Israeli government, and its members who are accused of corruption. They chanted slogans insisting that the government be turned out, accusing its leaders of thuggishness, and demanding that they be brought to account.

Some in the police were said to view the demonstration as a form of “sabotage.”

Former Defense Minister Benny Gantz said that the situation in the country was grave and that he would participate in the rally. He warned earlier on Saturday that Netanyahu intended to overturn the authority of the police, to violate the most basic values, and to refuse to negotiate about many agreements.

Opposition leader Yair Lapid warned that Netanyahu was attempting to foment a civil war with his policies. He sent a letter to the Israeli police warning against any use of force against the demonstrators, saying that they must be protected.

I’m struck by how oblivious the protesters are to the deprivation of 5 million Palestinians under Israeli military rule of basic democratic rights, as they seem to think that those rights are implicit in the Israeli way of doing things. The lesson is that if you let far right extremists oppress a whole people for decades, sooner or later they will come for your rights, too.